Home / frontnfl / What’s Next For The Packers Without Aaron Rodgers 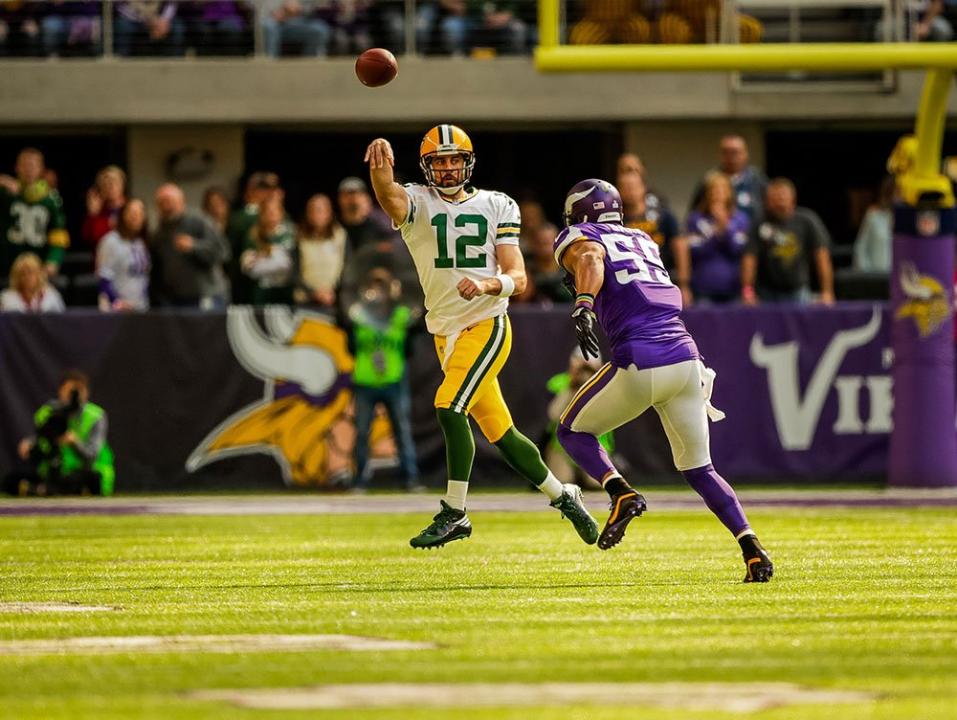 What’s Next For The Packers Without Aaron Rodgers


Devastated. Heartbroken. Depressed. These are just some of the football world’s terms for Aaron Rodgers’ injury in the first quarter versus the Minnesota Vikings during their Week 6 border battle. Rodgers was hit by Vikings linebacker Anthony Barr after a pass, with the hit causing Rodgers to land on his throwing shoulder. After being carted off to the locker room, it was later announced that Rodgers had a broken collarbone and could miss the rest of the Packers’ season. There’s nothing more painful than watching your team’s quarterback go down, knowing a backup who people doubted they would get their shot anytime soon was stepping in. It is even worse when your quarterback is Aaron Rodgers, a superstar and the glue of your team. Coach Mike McCarthy, in his postgame press conference, said it best in response to Rodgers’ injury: “In my opinion, he’s the best player in football.”

The Packers have a challenging season ahead to face without their elite quarterback, and it will be interesting to see the approach McCarthy and his crew take in response to this injury. Social media immediately erupted with suggestions for the Packers to consider, including controversial free agent quarterback Colin Kaepernick and Dallas’ recently-retired and current CBS broadcaster Tony Romo. However, McCarthy is sure in his decision to stand by Brett Hundley.

Hundley stepped in for Rodgers following Sunday’s first quarter injury. The first pass Hundley threw was intercepted by Vikings cornerback Xavier Rhodes. He finished the day with 18 completions for 157 yards and one touchdown and was intercepted a total of three times. Rodgers has thrown a total of three interceptions in the six games he has played in this season, which is actually high for him. (Last year, Rodgers did not throw an interception in the last seven regular season games.) During last year’s regular season, in total, Rodgers threw 40 touchdowns and seven interceptions. Needless to say, Rodgers is the star of this team and one of the league’s brightest overall. Without him, Brett Hundley will have to gain some confidence and be willing to perform under the pressure that comes with being the starting quarterback for a team known to be an offensive powerhouse in the past.

While McCarthy stands by Hundley being the quarterback for the green and gold, he may change his mind and search for outside help if Brett Hundley struggles over the next few weeks before the October 31st trade deadline. Despite the numbers Hundley put up this past Sunday, it is difficult to judge because the quarterback was facing a rival team, that happens to have one of the NFL’s best defenses, on the road. The Packers, however, are most likely to stick with Hundley and ride out the season with him starting and Joe Callahan as the backup no matter what happens.

One of the most beautiful parts about Aaron Rodgers under center for the Packers was that he had excellent chemistry with his receivers—chemistry you could see and feel. And this chemistry is precisely what allows Rodgers to make so many stellar plays each week. Rodgers can have anything thrown at him, and he can make it work and make huge plays for his team. Elite receiver Jordy Nelson missed the entire 2015 season for the Packers with a torn ACL, but the team still finished that season 10-6, just one loss shy of tying the Vikings in the NFC North division. There’s no doubting Aaron Rodgers’ brilliance in these situations, but it might be tougher for all the receivers to get a feel with the new quarterback than it was for Rodgers to eventually adjust without his best weapon.

The first five games of this season were filled with offensive line injuries for Green Bay, and Rodgers was still able to create unbelievable time for himself in the pocket to make the necessary throws for the offense. This battered offensive line was finally able to perform as a unit in Week 6, until three of the quarterback’s protectors exited the field. Bryan Bulaga suffered a concussion while David Bakhtiari (hamstring) and Lane Taylor (knee) both faced injuries. It is crucial that the offense works together to fill these gaps and to work with their new quarterback Brett Hundley so the Packers can compete in the NFC North moving forward without their best player. Aaron Rodgers spent endless time and effort making his offense better, and now it is their turn to prove they can steady the ship without him.