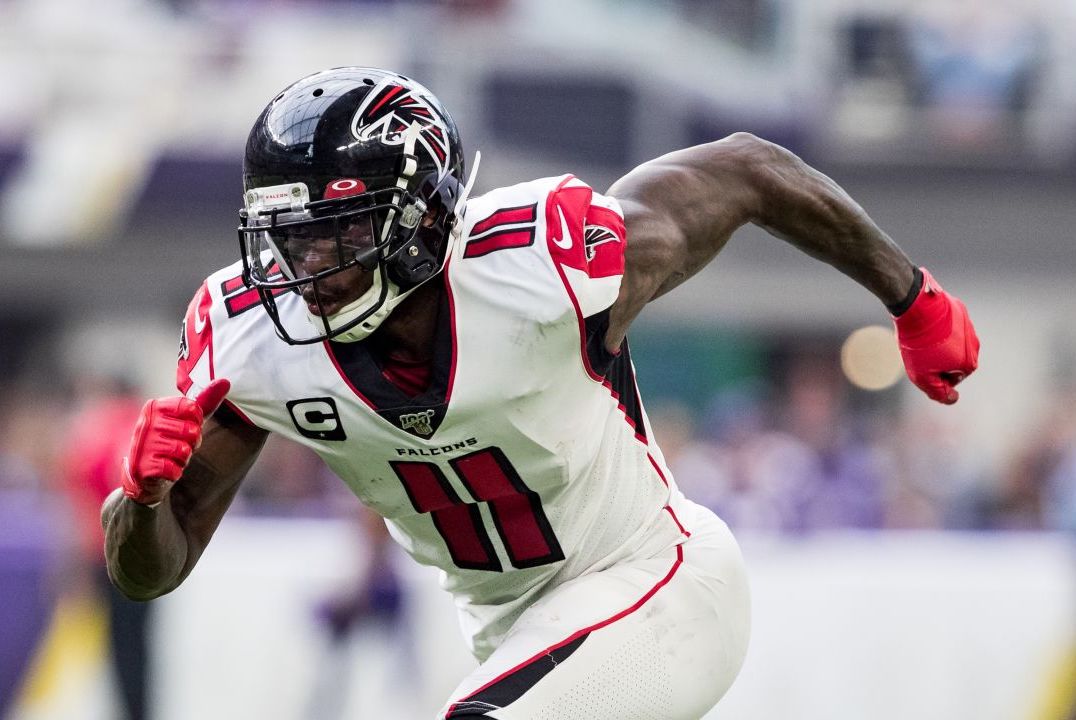 
Over the next three days, we will be releasing our 2019 NFL All-Pro Team, starting with the offense. There are some very tough choices (particularly tomorrow on defense), but in general, we think our picks are a better representation of play from this season compared to the AP’s selections.

In his first season as a full-time starter, Jackson took the league by storm, beating opponents with both his arms and legs while guiding Baltimore to the No. 1 seed in the AFC. Even if you took away the rushing numbers (a single-season quarterback record 1,206 rushing yards and seven touchdowns on 176 carries), Jackson’s passing production would have been enough to warrant MVP consideration, but it’s the dual-threat ability that really sets him apart as the most prolific weapon in football.

Tennessee didn’t make the mistake of not featuring Henry in 2019, as he picked up where he left off at the end of last year by taking the rushing crown and scoring 18 total touchdowns for the playoff-bound Titans. A runaway train when he gets to the second level, Henry can score from anywhere on the field, and defenders seem to underestimate his ability to move laterally while running downhill. A case could be made for Henry as the NFL’s most valuable non-quarterback.

Breaking the single-season record for receptions in a season (previously held by Hall of Famer receiver Marvin Harrison with 143) made Thomas a lock for an All-Pro selection, and defenses often looked to have no clue how to stop him and the New Orleans offense this season. Overall, the numbers speak for themselves, especially when you consider Thomas didn’t miss a beat when Teddy Bridgewater took over for Drew Brees at quarterback early in the year.

We want to avoid ties, but Chris Godwin deserves mentioning here after an 86/1,333/9 line, and he may have been the “top-billed” wideout if he played the final two-and-a-half games. After another dominant season, though, Jones gets the nod by helping to carry Atlanta to a 7-9 finish—which was accomplished in large part due to a couple of game-winning receptions in the final minutes/seconds against Philadelphia and San Francisco. Plus, Julio remains perhaps the best blocking receiver in the league.

Our pick for the flex spot in two consecutive seasons, McCaffrey built on his standout 2018 campaign by becoming the third player in NFL history to have 1,000 rushing yards and 1,000 receiving yards in a single season this year, joining Roger Craig and Marshall Faulk. That accomplishment combined with a chase for the single-season-yards-from-scrimmage record overshadowed McCaffrey shattering the mark for receptions in a season by a running back, and he was the Carolina offense in 2019.

Multiple injuries limited Kittle’s game-breaking explosiveness after he averaged 15.6 yards per reception last year, but he still proved himself as the best all-around tight end in the NFL, and if anything, he should be commended for playing through pain and helping the 49ers claim the NFC’s top seed. With the personality of a WWE superstar, Kittle plays like it with reckless abandon whether he’s making a catch in traffic, throwing would-be tacklers aside, or destroying someone in the running game.

It helps to have Lamar Jackson effortlessly escaping defenders when needed, but Stanley was remarkable on the blindside for Baltimore, and his play was key in allowing the likely NFL MVP to showcase his talents as a thrower in 2019. Aside from not allowing a sack this season, Stanley opened holes in the running game and committed a career-low four penalties.

The Colts unfortunately took a step back following the surprise summer retirement of Andrew Luck, but the running game remained a bright spot, and Nelson led the way for Marlon Mack’s first career 1,000-yard season. Based on how aggressively violent Nelson is on the interior, it was encouraging to see him cut back on the penalties (from nine in 2018 to three this season).

Along with Julio Jones, Kelce is the only offensive player to make all three of our All-Pro teams so far, and even in his age-32 season, Philly’s standout center played every single snap for a roster that was ravaged with injuries. Retirement could be the next move for Kelce, but his play remained the benchmark at the position, and the Eagles will have another big hole to fill if his career is over.

Yanda is an eight-time Pro Bowl selection, but 2019 may have been his best season yet, as the Ravens easily led the NFL in rushing with over 200 yards per game, and both Mark Ingram (5.0 yards per carry) and Gus Edwards (5.3 yards per carry) were forces when running inside to complement Lamar Jackson’s speed. Unless it was a blowout in favor of Baltimore, Yanda was on the field to set the tone up front with power and grit.

Ramczyk has been an elite player since entering the league in 2017, but he elevated his game even further this year, and a real argument could be made for him being the top offensive lineman regardless of position. Individually, the former first-round pick didn’t allow a sack in 16 games, and the Saints were again one of the most balanced attacks in football all season—a rarity for a team that played five games without their quarterback (who happens to be a future Hall of Famer).