Home / frontnfl / Who Should Replace Jon Gruden On MNF? 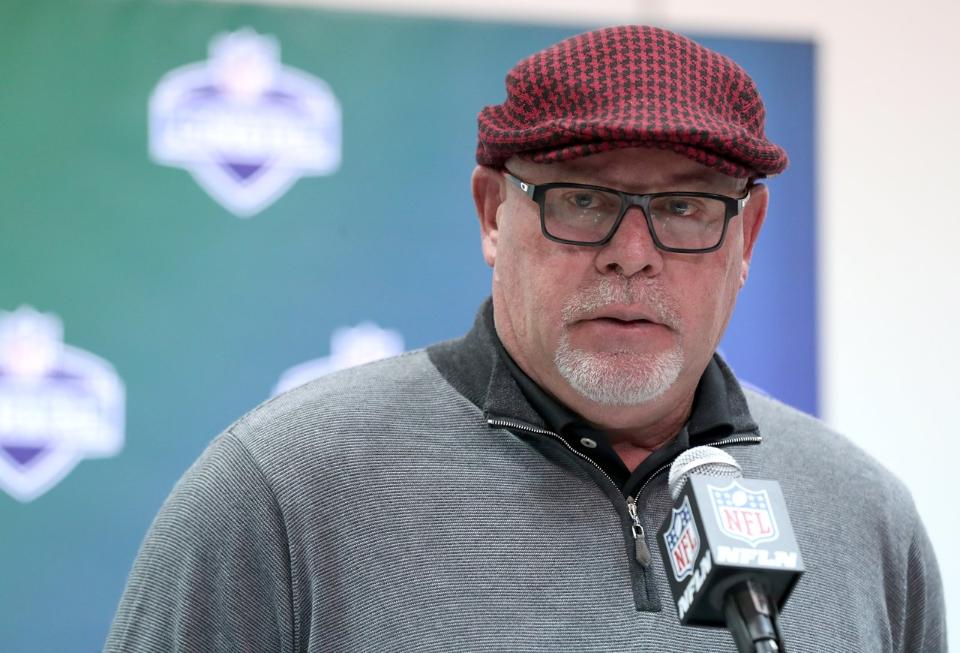 Who Should Replace Jon Gruden On MNF?


Football fans were fortunate to get one more game with Jon Gruden in the broadcast booth for ESPN in Saturday’s exciting playoff game between the Titans and Chiefs, but everyone knew he was going to be named the next head coach of the Oakland Raiders shortly after, which he was. The departure of the 54-year-old head coach leaves a big hole in the booth for Monday Night Football and ESPN in general, and it will be a tall task to replace one of the NFL’s elite game analysts. Here’s who I think the network should go after for 2018 and beyond.

With Gruden leaving ESPN, they not only have a hole in their primetime NFL broadcasts, but also will be without him in their NFL Draft coverage, not to mention Gruden’s QB Camp every summer. If there’s anyone that could seamlessly transition into all of the head coach’s former roles, it would be Peyton Manning. The future Hall of Fame quarterback obviously has the football knowledge to perform in any television role, and he’d be hilarious in the broadcast booth. That said, I’m not sure the job would be competitive enough for Peyton, but this would be a dream hire for ESPN.

There are plenty of options both on and off this list, but if I had to guess the most likely candidate to replace Gruden, I’d say it’s Bruce Arians. The recently-retired head coach already alluded to a potential job in the media at his retirement press conference, and he has the personality to be great in the booth. Arians has been a football guy his entire life, and this would be a stress-free way for the 65-year-old to remain close to the game.

Sunday NFL Countdown isn’t at all what it used to be for the struggling ESPN, but Randy Moss has shown potential in his two years with the network. One of the greatest receivers of all-time is extremely knowledgeable when it comes to X’s and O’s, so he shouldn’t have any problems breaking down the game in real time for viewers.

He sometimes gets a good game to call with Thom Brennaman as the third broadcast team on FOX, but Chris Spielman is an underrated game analyst that would get a chance to really shine on Monday Night Football. This really becomes a fit when you consider that the three-time All-Pro linebacker used to call college football games with play-by-play man Sean McDonough, as the pair already has strong chemistry.

A rising star in the media ranks since joining ESPN in 2013, Louis Riddick should certainly be considered for the broadcast booth, as the network has had a better look than anyone at the former NFL defensive back and executive. Riddick already shines at the NFL Draft and on all of the studio shows he appears on, and his background as a scout would provide a unique perspective on Monday nights.

Well, this is one way to get Tebow back in the NFL. I hope the former first-round pick gets another chance to play quarterback in the league (he won a playoff game and is 8-6 in his career), but that looks like a longshot. If that’s still the goal, talking NFL action in the booth would probably give him a better chance of getting back in the game than playing minor league baseball does, but Tebow probably wouldn’t be a color commentator without passion for the job.

Not many are talking about Simms as a candidate, but he would be a very solid hire for ESPN. While Tony Romo was quickly crowned the king of broadcasting immediately after his debut, I actually think Simms was better at the job (but Romo has plenty of room for improvement) and got a bad reputation. As long as someone finally tells him that “acrossed” isn’t a word, it would be great to hear Simms back in the booth to close out each week.