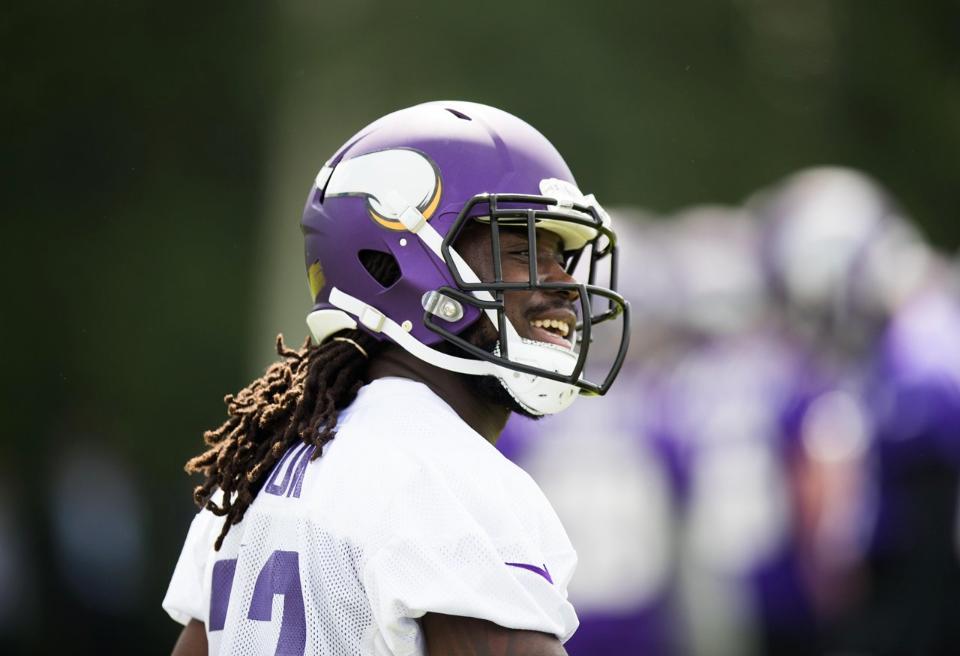 
ESPN just released their 2017 top-200 fantasy football rankings for both PPR and non-PPR leagues. It is always interesting to see where the initial rankings stand when it comes to position battles, particularly at the running back position. Using the non-PPR rankings (because they are clearly better), here are how some notable backfield competitions/committees stand in the newly-released rankings and the best value in my opinion if forced to choose a guy where they are ranked. [Note: we will have our one-and-only set of rankings late in the summer]

Seeing Woodhead as the top-ranked Ravens running back is a little bit surprising for the non-PPR top-200, but that’s where ESPN safely puts him. Of course, Kenneth Dixon’s four-game suspension is probably a big reason for it, and while he is still ranked in the top-100, there is no guarantee that he even has a role if Woodhead and Terrance West perform well in the first quarter of the season. I’m not drafting Woodhead 65th overall in standard leagues, so I’ll go with West just outside the 16th round as the best value.

The Panthers selected Christian McCaffrey with the 8th overall pick in the NFL Draft, but they are not going to just shove their long-time starter Jonathan Stewart to the side. Although he only averaged 3.8 yards per carry last season, Stewart performed well down the stretch with at least 20 carries in three of his last four games, including a 132-yard effort. Still, while you can expect McCaffrey to be the “backup,” he will see the field a ton as a runner, receiver, and returner, and he will probably end up going higher than 50th overall in most leagues based on his popularity.

I am very curious as to whether or not the people who said they would never draft Joe Mixon if they were a GM will consider him in their fantasy drafts this summer. The rookie could immediately slide in as the workhorse for the Bengals, or he could struggle to see the field if Jeremy Hill and Giovani Bernard (coming off a torn ACL) step up in the preseason. I don’t think they’ll be able to keep Mixon on the sidelines for too long, but a guy who scored a combined 21 touchdowns over the past two seasons as the RB47 could be a steal.

The Browns beefed up their offensive line this offseason, so whoever gets the most carries out of the Cleveland backfield could be in for a solid campaign. Crowell is the presumptive favorite, but I still think Johnson is the better player. However, Hue Jackson seems hesitant to feature him, so even in the fourth round, Crowell is probably the better value.

Jamaal Charles is no lock to make the team, but if he’s healthy, I don’t see any reason he shouldn’t and wouldn’t have a decent role. C.J. Anderson will probably form the better half of a committee, but Charles just needs a handful of touches to make an impact. Devontae Booker showed flashes as a rookie, and 180th overall is 20 picks away from being drafted in 10-team leagues, but Charles, despite being a high-risk pick, is worth it in the 13th round.

Andy Reid has said he is a big fan of Spencer Ware, so Kareem Hunt is unlikely to overtake him as the starter early on. The third-round pick is probably more of a threat to Charcandrick West’s role, as West does not even make the ESPN top-200. Ware averaged 4.3 yards per carry in his first season as the lead back, and so far, there is nothing to suggest that he will see any less of a role than last season.

Sure to be one of the most popular picks in fantasy drafts this summer, I highly doubt Dalvin Cook lasts until the seventh round in most leagues. That said, Latavius Murray didn’t sign a nice contract with Minnesota to sit on the sidelines. Cook is ranked as a low-end FLEX, which he could outperform by a mile, but I still like Latavius Murray as the RB43 over the rookie. Whoever is the starter in Week 1 has a juicy matchup with New Orleans (on paper, at least).

It might be best to just simply avoid all New England running backs this season. ESPN clearly believes Gillislee will take LeGarrette Blount’s role, and he will be the best value if that is the case. I’m not so sure, though, as the Patriots went after Rex Burkhead at the start of free agency before just recently signing Gillislee away from the Bills. Burkhead could wind up being a highly-paid special teams player who sprinkles in on offense, but that wouldn’t hurt your fantasy team too bad if you take him in the 16th round. Dion Lewis and Super Bowl hero James White will obviously both be involved, too.

Fresh off his first 1,000-yard season and being among the league-leaders in yards per carry, Mark Ingram was rewarded with his team bringing in one of the greatest running backs of all-time to compete with. Adrian Peterson has proved people wrong before, and I don’t like betting against him. Sean Payton would probably like a balanced offense where both guys can have fantasy value, and while I am a fan of Ingram’s, Adrian Peterson as the RB34 seems almost unreal.

The Jets seem to have the makings off a not-so-good team in 2017, so I probably won’t have Powell or Forte in my fantasy league this year. Powell is coming off the best season of his career with 722 rushing yards (5.5 YPC) and 58 catches, so he will probably be a solid pick in PPR leagues with the Jets projected to be trailing a lot. As stated, I probably won’t have either guy, especially at these rankings, but if forced to choose…

In standard leagues, this one is pretty easy. Blount just led the NFL in rushing touchdowns with 18 of them, and while leaving a Tom Brady-led offense will hurt anyone’s value, Blount will still have a good role as the goal-line and short-yardage back with the Eagles. Darren Sproles should dominate work as a receiver out of the backfield, but he will be volatile in standard leagues.

Seattle has done a good job of keeping Eddie Lacy in shape so far, and they seem to want to commit to him as their starter. C.J. Prosise is going to see work as a receiver, but Lacy is a decent pass-catcher in his own right. Let’s not forget Thomas Rawls, though, who when healthy as a rookie, averaged 5.6 yards per carry and made people forget about Marshawn Lynch. The Seahawks offensive line could still be a weakness and Lacy’s weight could always go up, so I’m taking Rawls nearly 100 picks later as the best value.

“Fat Rob” looked like Frank Gore lite at times in his rookie season, but that didn’t stop the Redskins from using a fourth-round pick on Oklahoma’s all-time leading rusher in Samaje Perine. I like both players, and Washington surely does, too, so this could turn into a frustrating situation for fantasy owners. Rob Kelley will probably get the first shot at leading the backfield, but I don’t think that is worth more than Perine at literally double the picks later.