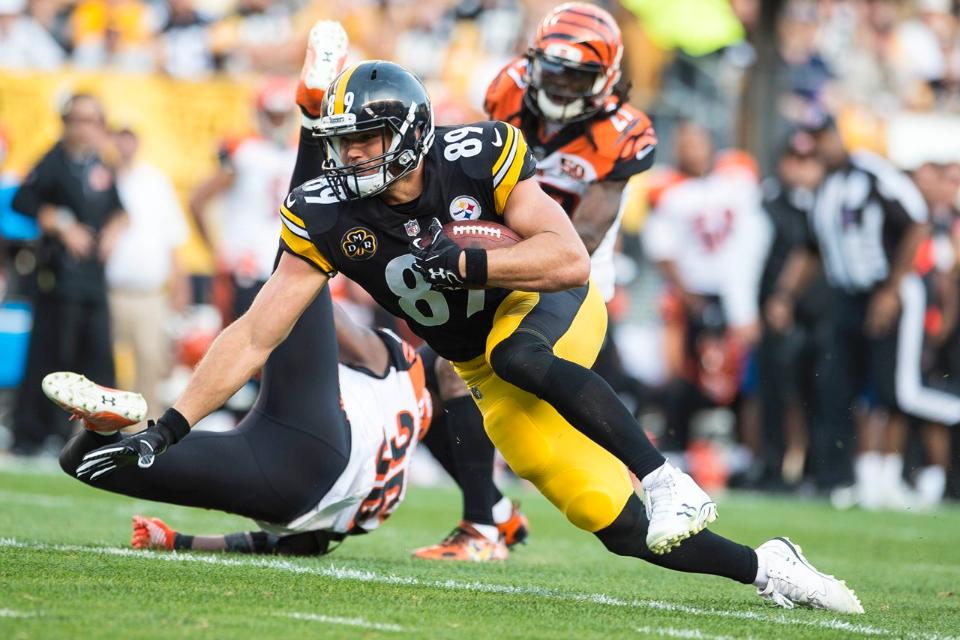 Rivers has already gotten through Denver twice, so he has a much easier schedule the rest of the way, including this week against New England. Also, excluding a three-interception half against the Chiefs, he’s quietly playing some of the best football of his career. The 35-year-old is an underrated QB1 option.

Sunday night was supposed to be the breakout for Atlanta’s offense, but that clearly didn’t happen with just seven points in a Super Bowl LI rematch. Matt Ryan just doesn’t look as comfortable as he did a year ago, and play-calling is probably a big reason why. Until they turn things around, Ryan needs to be downgraded to a low-end QB1.

After averaging just 2.37 yards per carry over the first six weeks of the season, Latavius Murray broke out with a 113-yard game and scored his first touchdown as a Viking in Sunday’s win over the Ravens. “Tay Train” has seen an increase of touches in each of the past three weeks, and he looked like the 2016 version of himself against Baltimore. He’ll look to keep it going in London on Sunday, but Murray needs to be picked up if he was dropped in any leagues.

Anderson was a popular start last week against the Chargers, but he received just 10 carries as the Broncos decided to try beating Los Angeles through the air. He’s averaging a healthy 4.3 yards per carry this season, but Denver’s starter is nothing more than a FLEX option with Jamaal Charles and Devontae Booker healthy.

New England has committed to Lewis as the main ball-carrier over the past couple weeks, as starting with an impressive performance against the Bucs, he’s rushed 31 times for 181 yards (5.84 YPC) over the past three games. If he sees 12-15 weekly touches, Lewis is a solid FLEX option in a high-powered offense.

Coleman is averaging 5.2 yards per carry and 11.2 yards per reception, but the team’s lack of success is giving him fewer snaps and touches behind Devonta Freeman. The dynamic back was on the field for just 19 plays against New England, so he’s probably more of a FLEX option until the Falcons improve offensively.

Heading into Week 7, Amari Cooper had 146 yards and one touchdown on the year, but he exploded with an 11/210/2 line on Thursday Night Football to break out of his slump. Perhaps it isn’t too late for a third-year mega breakout.

There appears to be some fire to the Bryant trade rumors, as he apparently wants an increased role or to be elsewhere. It’s unlikely Pittsburgh gives him away with his value dropping, so the talented wideout will probably stay behind JuJu Smith-Schuster for the rest of the season, making him an unreliable fantasy option.

The headliner of the previous “Fantasy Stock Report” has really fared well the next week, and Doctson was last week’s guy. Washington finally benched Terrelle Pryor in favor of the 2016 first-round pick, and Jay Gruden wants to keep him in the starting lineup because he’s clearly the most talented player on the depth chart. I was mainly talking about his dynasty stock last week, but the future is now.

Pryor didn’t play at all in the first half of Monday night’s loss to the Eagles, and then when he did get in, he ended up dropping two passes and carelessly went out of bounds short of a first down on one of his two receptions for 14 yards. Don’t expect him to climb back into significant snaps without an injury.

I have a feeling this will be the breakout player for Week 8 on this list, as McDonald is getting more involved for the Steelers as he gets more familiar with the playbook. After Carolina’s Ed Dickson went for 175 yards against the Lions three weeks ago, Big Ben might want to use McDonald to pick up chunk yardage in the same way.

With Hunter Henry dominating snaps at tight end, there just isn’t enough targets to go around for Gates to be a fantasy option anymore. His chemistry with Philip Rivers could lead to a couple more scores in perhaps the final season of his Hall-of-Fame career, but they will be difficult to predict.