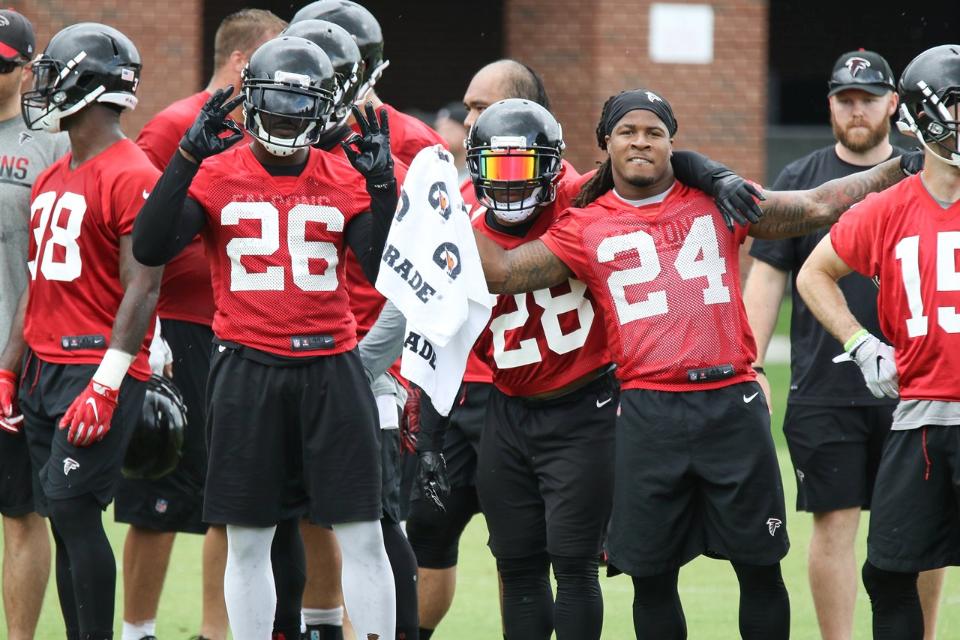 
Last week, I broke down why Latavius Murray was my undervalued fantasy running back for 2017, and now I will give my most overvalued running back.

Currently being drafted 11th overall according to Fantasy Pros, Falcons running back Devonta Freeman is going too high in my opinion. Freeman has been an elite fantasy player for each of the past two seasons, finishing as the RB1 in 2015 and RB6 last season, but he is a regression candidate for several reasons.

First of all, it’s hard to imagine losing arguably the best offensive coordinator in the NFL will help out Freeman’s fantasy production. Kyle Shanahan is now the head coach of the 49ers, and while his replacement Steve Sarkisian is a bright offensive mind in his own right, the switch could spell bad news for Freeman. Atlanta was the league’s #1 scoring offense in 2016, and even though Shanahan’s system is supposedly staying in place, Sarkisian will certainly change some things.

The biggest change—and the one that could most impact Freeman—is more touchdown chances for Julio Jones. With less than seven touchdowns per season since entering the league, Julio has been criminally underused in the red zone. Jones should be a machine in scoring territory as the most physically-gifted wideout in the game, but is scoring just one touchdown per 16.15 catches since 2014 (when Freeman was drafted). Here are the rates other elite wide receivers are scoring at over the past three seasons:

For Jones to be scoring at a much lower rate than the rest of these guys seems almost unreal. Steve Sarkisian has already said he wants to “maximize his opportunities” in the red zone regarding the all-world wide receiver, so Julio should definitely see an uptick in touchdowns in 2017. If that is the case, Devonta Freeman’s production will be hurting.

After limited playing time as a rookie, Freeman has scored 14 and 13 total touchdowns in 2015 and 2016, respectively. Sark is going to continue to rely on his talented running back, but the touchdown numbers are looking at a decline with Julio expected to be a focus in the red zone. Also, keep in mind that in Freeman’s RB1 campaign, it was a weak year for fantasy running backs.

David Johnson led the position with 313 fantasy points in 2016, which was 70 points higher than Freeman’s 243 points in 2015. In that breakout season for Freeman, he averaged just 3.98 yards per carry. And people are quick to forget that he actually lost the competition for the starting job in the preseason, and it took a Tevin Coleman injury for Freeman to get his chance.

Had Tevin Coleman not been injured in his rookie season, we might be talking about him—not Freeman—as an elite fantasy running back. The Falcons cut Freeman’s touches by 16.8% from 2015 to 2016 in order to give Coleman more playing time, and the former third-round pick could cut into it even more this year. I actually wouldn’t be surprised if the backfield sees a shakeup where Coleman gets more playing time than Freeman, as Sarkisian will want to live up to his predecessor, and he might view Coleman as the more explosive player.

I haven’t even discussed the off-field concerns about Freeman regarding his contract, which date back to Super Bowl week. The week before the big game, the now-25-year-old voiced his desire for a new deal. What made Freeman bring it up then is unclear, but it wasn’t a good look for him. Still, the team has said all offseason that they’re working on an extension with their starting running back, but it has yet to get done.

General manager Thomas Dimitroff said he would like to get a deal done by tomorrow, but Freeman’s agent has since met with the team and left, signaling a deal might not be too close to getting done. At some point, you would think the team would decide to end negotiations and let him play the season out so it isn’t a distraction too deep into camp. As stated, they have a capable backup who I think is a better long-term investment anyway.

Furthermore, the Falcons couldn’t have liked some of Freeman’s comments last month about the Super Bowl LI loss. He said on Sirius XM Radio that “you can’t dwell on the things that went wrong,” but went on to say this:

Once again, not a good look at all. This sounds an awful lot like Marshawn Lynch’s final year with the Seahawks, and he eventually retired after the season. Freeman obviously won’t do that, but the two sides could split if they don’t agree on a deal before the regular season starts. Freeman’s comments could give the team reason to play Tevin Coleman more, too.

I have been fairly negative about Freeman here, but he is definitely a really good player, and should be a solid fantasy contributor for the third consecutive season. As a borderline top-five running back and first- or second-round pick, though, I am passing on him. I think Freeman will be more of a midrange RB2 in 2017, and wouldn’t take him until the third round of my fantasy draft.