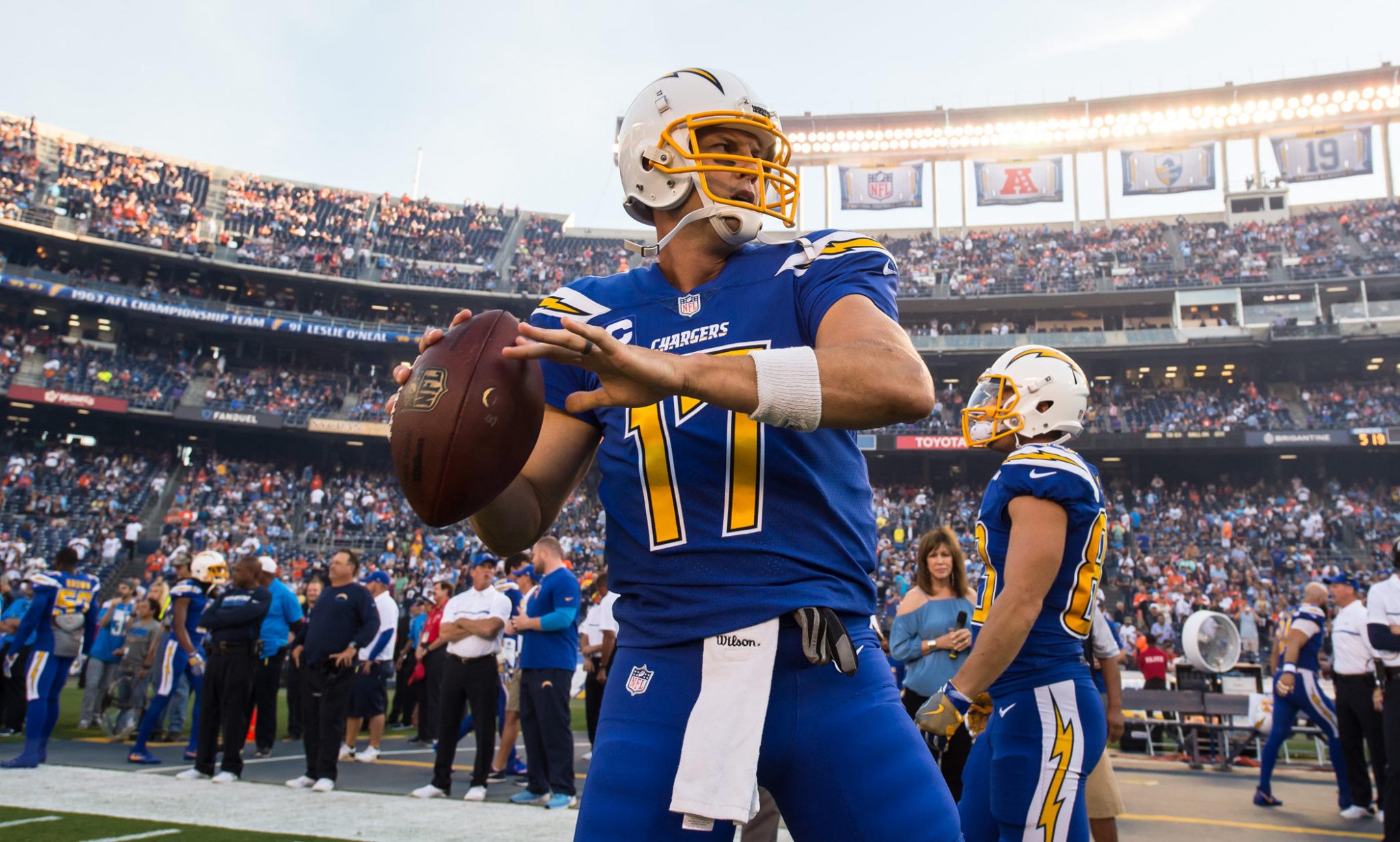 
July is here, Independence Day has passed, and we are basically just two months away from fantasy football. On Monday, I revealed why David Johnson is my #1 player in 2017 fantasy drafts, and over the next eight weeks I will give an undervalued and overvalued player at quarterback, running back, wide receiver, and tight end. As always, this is based on standard (non-PPR) scoring.

Philip Rivers is my undervalued fantasy quarterback for 2017. The 35-year-old has been the Chargers starter since 2006, and his real-life play has exceeded his fantasy performances so far. Rivers fantasy finishes over the past 11 years are as follows:

Rivers started his career with a top-10 finish in five of his first six seasons, but has just one such finish over the past five years. That campaign, in 2013, earned him first-team All-Pro honors and a playoff berth and win for the Chargers.

The 2013 San Diego Chargers had Ryan Mathews healthy for 16 games and rushing for 1,255 yards, Antonio Gates healthy for 16 games and leading the team in targets, Keenan Allen starting 14 games and going over 1,0000 yards as a rookie, Ladarius Green playing in 16 games, and Danny Woodhead providing a change-of-pace in the backfield in his way to 76 catches. Many media members and sports fans in general don’t like to think so, but there are actually guys on the field besides the quarterback that impact the team’s performance.

Unfortunately for Philip Rivers, some of his most valuable teammates haven’t been able to stay on the field recently. Keenan Allen has played just nine games over the past two seasons, Antonio Gates has made just 13 starts over the same span as he battles age, and Danny Woodhead had a 16-game season in 2015 sandwiched by three- and two-game seasons in 2014 and 2016, respectively.

And the most underrated unit on a football team, the offensive line, has been just as injured as skill position players have been for the Chargers. Basically, Philip Rivers has been trying to do a lot on his own.

But that should change in 2017. Rivers was probably one of the happiest players in the league after his team picked Mike Williams on Day 1 of the NFL Draft and two guards (Forrest Lamp and Dan Feeney) the next day, and with good reason. Williams gives the veteran passer a Dez Bryant-like talent to throw it up to, but the offensive linemen might be just as important.

Back when Rivers was a consistent, clear-cut fantasy starter, he had Hall of Fame running back LaDainian Tomlinson behind him in the backfield and wideout Vincent Jackson as a big target to hit either in the slot or on the perimeter.

L.T. is obviously an impossible talent to replicate, but I think Melvin Gordon is one of the top backs in the NFL today. If the offensive line can stay healthy and be at least an around-average group, Gordon will shatter his 3.7 yards per carry clip through two seasons.

Overall, it’s hard to argue against Rivers’ 2017 supporting cast as the best of his career.

Tyrell Williams just had a 69-catch, 1,059-yard, seven-touchdown breakout season and is probably the third or fourth option in the passing game, Keenan Allen has proven to be a difference-maker when on the field, and Huner Henry caught eight touchdowns as a rookie while playing a position that usually takes some time to transition into the league. On paper, I see a lot of touchdown scorers surrounding Rivers.

Of course, it should be mentioned that San Diego is no more with the Chargers’ move to Los Angeles. While anyone who has or is watching the new season of All or Nothing knows that a relocation is difficult on an NFL team, moving in-state shouldn’t be that big of a deal. I wouldn’t take the move to LA into consideration for fantasy purposes unless you need a 65th tiebreaker between two players.

People might be hesitant about drafting Rivers as a fantasy starter after he threw a career-high 21 interceptions in 2016, but he was trying to do it all himself. He won’t be pressing in 2017 with a talented offense around him, and also a young, emerging defense to back him up.

Besides an outlying 2012, Rivers has been between 4,000-4,800 passing yards and 27-34 touchdowns every year since 2008. I would guess the offense plays well enough for him to end up on the better end of each of those ranges this season. And a better team—which I am banking on—would will allow Rivers to not press as much and take better care of the football.

A campaign of 4,500 passing yards with 30+ touchdowns and less than 15 interceptions would put LA’s newest quarterback squarely on the QB1 map. Currently going in the 13th round of fantasy drafts, he stands above the rest of the solid late-round options.