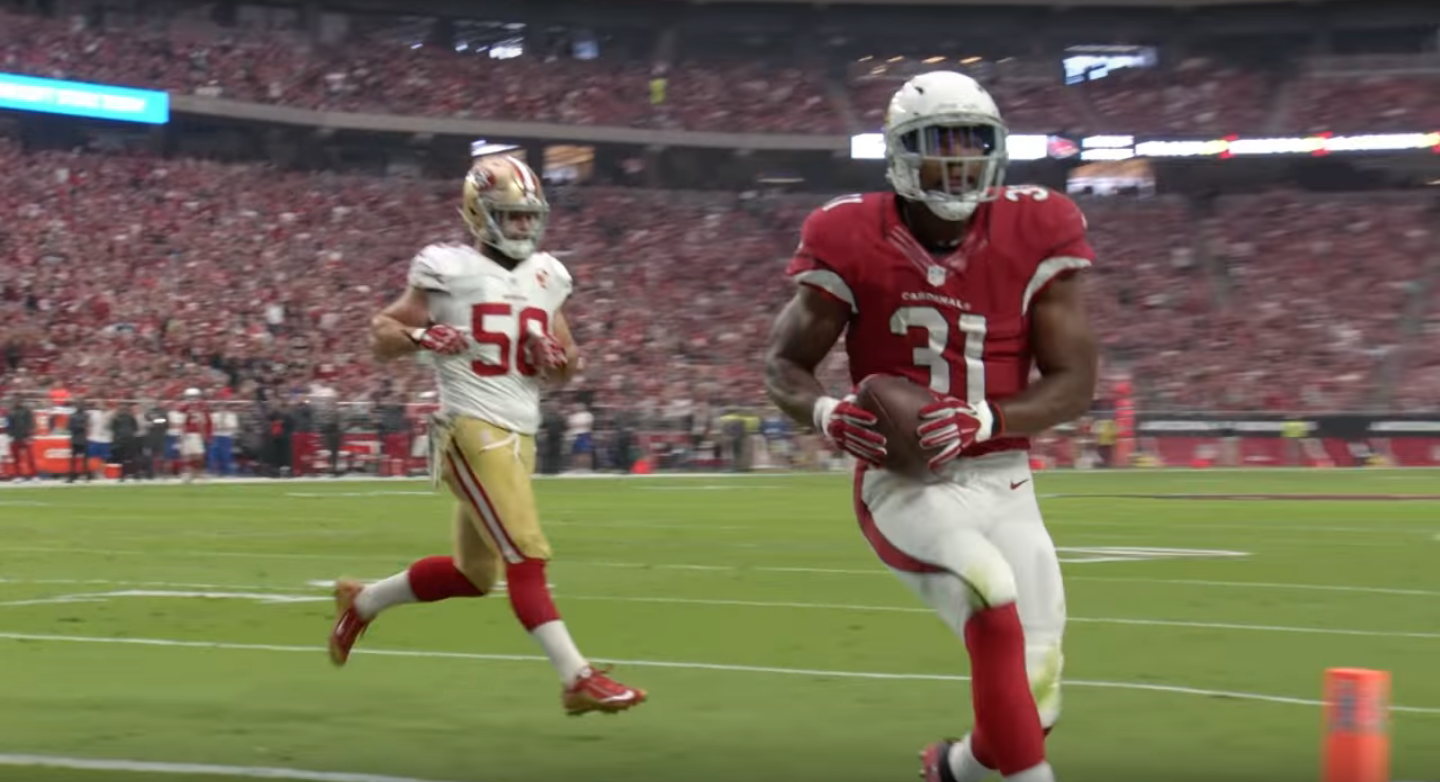 Making The Case For The First Pick: David Johnson


David Johnson is the final player I will make the case for as the first overall pick in fantasy drafts this summer. If you missed Le’Veon Bell, Antonio Brown, and Ezekiel Elliott, you can read them, too, and I will give my top-three fantasy players for the 2017 season at the end of this article. My full rankings will be available in August. [Note: this conversation is for non-PPR leagues (i.e. standard), which is the type of scoring you should be using]

I said my top-three fantasy players for 2017 will be revealed at the end—I’ll spoil the surprise and give #1 right now.

Johnson rushed 293 times and caught 80 passes in 2016, and he looks to be ready for more. Cardinals head coach Bruce Arians said that his superstar running back is “still too young” to overuse and wants to give Johnson 30 touches per game.

First of all, we need to decide if we can take Arians at his word. Coaches say one thing to the media and do another all the time, but here is why I believe Arians. For one, he is a straight shooter. Yes, he has been less than truthful in the past and has even been quoted as saying, “I lie pretty good,” but those were to create a competitive advantage.

What advantage or disadvantage would be created by saying that Johnson will be given heavy workloads? Teams have to game plan for him either way. If anything, it might make defensive coordinators lose a little more sleep than usual when preparing for DJ.

The main reason I believe Arians is being honest is because he knows this could be a make-or-break year for his team, and he has already said this is his last coaching job. BA turns 65 in October, Carson Palmer will be 38 before the regular season concludes, and Arizona has too much talent to miss the playoffs for the second straight year.

This might be it for Arians, so he needs to rely on his best player—and one of the best offensive players in the league—to carry and catch it as much as he can. If Johnson handled 30 touches a game for 16 games, the season-total would be 480 touches, which would be the second-highest in NFL history behind James Wilder’s 492 in 1984. Right now, Larry Johnson has the second most in a single-season with 457.

David Johnson would see 107 more touches than he did last season for Arians’ 30-touch prophecy to come true, but even a slight increase (or decrease, for that matter) would make Johnson the safest first pick in all of fantasy football. Last season, he led all running backs and non-quarterbacks in fantasy points with 313 in standard leagues, and did so while basically missing Week 17 after suffering a knee injury.

Last year, DJ’s 1,239 rushing yards and 879 receiving yards gave him 2,118 yards from scrimmage to go along with his league-leading 20 touchdowns. Imagine the numbers he will put up with another 100+ touches on an expected-to-be improved offense. Carson Palmer apparently looked good this offseason, so if John Brown is healthy and Larry Fitzgerald keeps doing what he’s been doing, Arizona could have an explosive offense like they did in 2015.

And it will be centered around Johnson.

The 25-year-old has already scored 32 total touchdowns in his young career, which is one more than Le’Veon Bell has in twice as many seasons. Plus, Johnson wasn’t even the starter until Week 13 of his rookie year, so I would guess he is closer to the 20 scores from last season than the 12 scores as a rookie.

Johnson has also said he wants to gain 1,000 yards both on the ground and in the air, and that would already be 200 fantasy points. Factor in the touchdowns and rushing yards past 1,000, which is will undoubtedly get if he stays healthy, and we are probably looking at a campaign like this.

I have been keeping my potential projections conservative, and do so again here with 400 touches for DJ, which is 80 short of 30 per game. He also doesn’t quite reach 1,000 receiving yards, but I think he has a good chance of doing so. Still, these numbers would give him 344 fantasy points in standard leagues. I’d take that number at the first overall pick.

Now, what could the 480-touch season look like? Here are the “optimistic” projections for Johnson.

And to be honest, those numbers aren’t that out of reach for Johnson. I would probably say he ends up in between the conservative and optimistic projections, and will be well worth the first overall pick in fantasy drafts this summer.

More than anyone else, Johnson is a guy that it will be awesome to own and frightening/frustrating to play against. That is why he tops my 2017 top-three fantasy players.