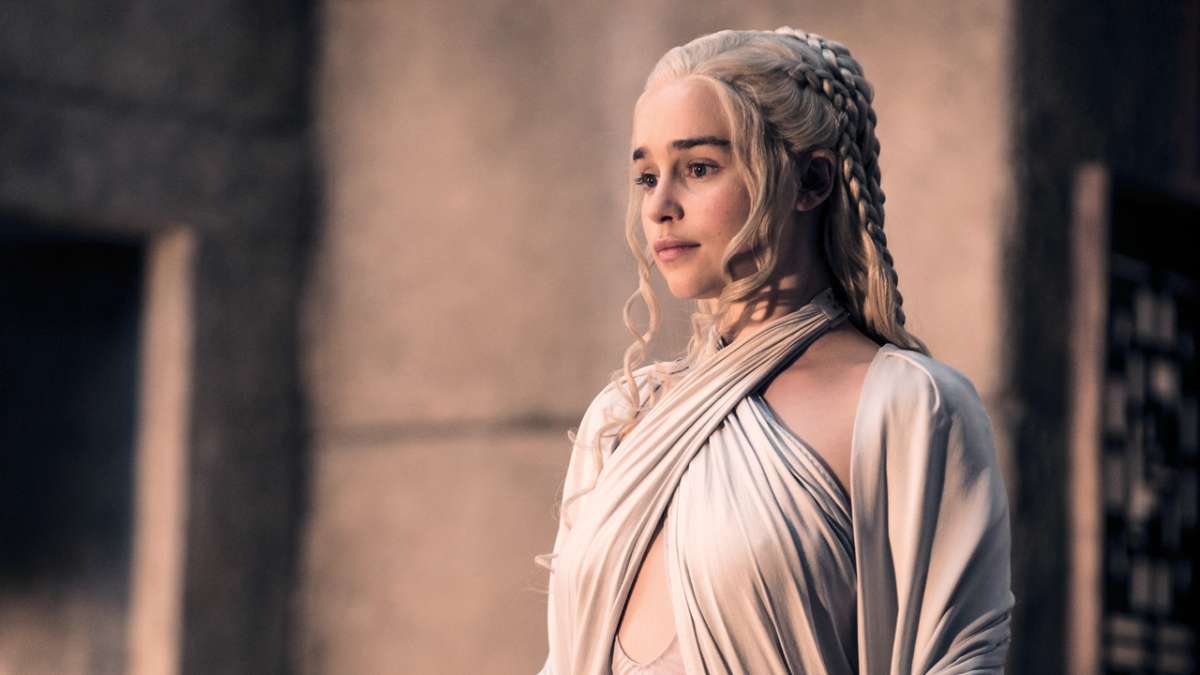 
Previous Episode: “Sons of the Harpy”

Since capturing him earlier in the season, Jorah has been mostly cold towards Tyrion because he is simply focused on getting him to Daenerys, but the two start talking more as they reach Valyria. Then, Drogon flies above them, so Tyrion sees a living dragon for the first time—and we later learn that he’s infatuated by them. However, a Stone Man jumps in the water as Tyrion and Jorah are gazing at the sky, and suddenly the boat is being attacked. Things don’t look good for the Lannister captive when he is pulled underwater, but Jorah is able to pull him ashore to safety. The episode ends with Jorah asking Tyrion if he was touched, and he wasn’t, but Mormont walks away and rolls up his sleeve to reveal he’s been infected with greyscale.

“Kill the boy, and let the man be born.” – Maester Aemon to Jon Snow

When Tyrion blacks out after being pulled underwater by a Stone Man (filmed in a swimming pool in Belfast), it’s the longest blackout ever in Game of Thrones history. They wanted people to momentarily think he had died. The blurriness you can see as he regains consciousness was achieved by cinematographer Greg Middleton holding his fingers over the camera lens.

In “Kill the Boy”, Sam and Measter Aemon are discussing Daenerys Targeryen, and the conversation ends with the aging Maester saying, “A Targaryen alone in the world, is a terrible thing.” He is talking about Dany because he’s unaware—as is the viewer at this point—of Jon Snow’s true parentage, but it was clear foreshadowing when Jon walks in right at the end of that line. The Lord Commander wants Maester Aemon’s advice for what to do about a decision that he wants to make, but would make half of the Night’s Watch hate him, which shows he both wants to do the right thing and isn’t afraid to ask for outside counsel. Jon knows the true enemy is the Army of the Dead and they need all the help they can get, but it was still very difficult to stand in front of everyone at Castle Black to say they should fight with the Wildlings. Like Daenerys is Essos, Jon consistently shows great leadership by making the right decision, even if it’s not the popular one.

Stannis Baratheon making the decision to move ahead and march to Winterfell—with Queen Selyse and Princess Shireen coming along—is another #ForTheThrone moment, but Daenerys Targaryen deciding she will marry Hizdahr is the biggest #ForTheThrone moment of “Kill the Boy”. After feeding one master to her dragons as a display of ultimate power in the aftermath of the death of Ser Barristan Selmy, Daenerys decided that she will marry Hizdahr—it will work as an alliance to strengthen her relationship with the Meereenese as she looked to get the city under control and show she could rule.