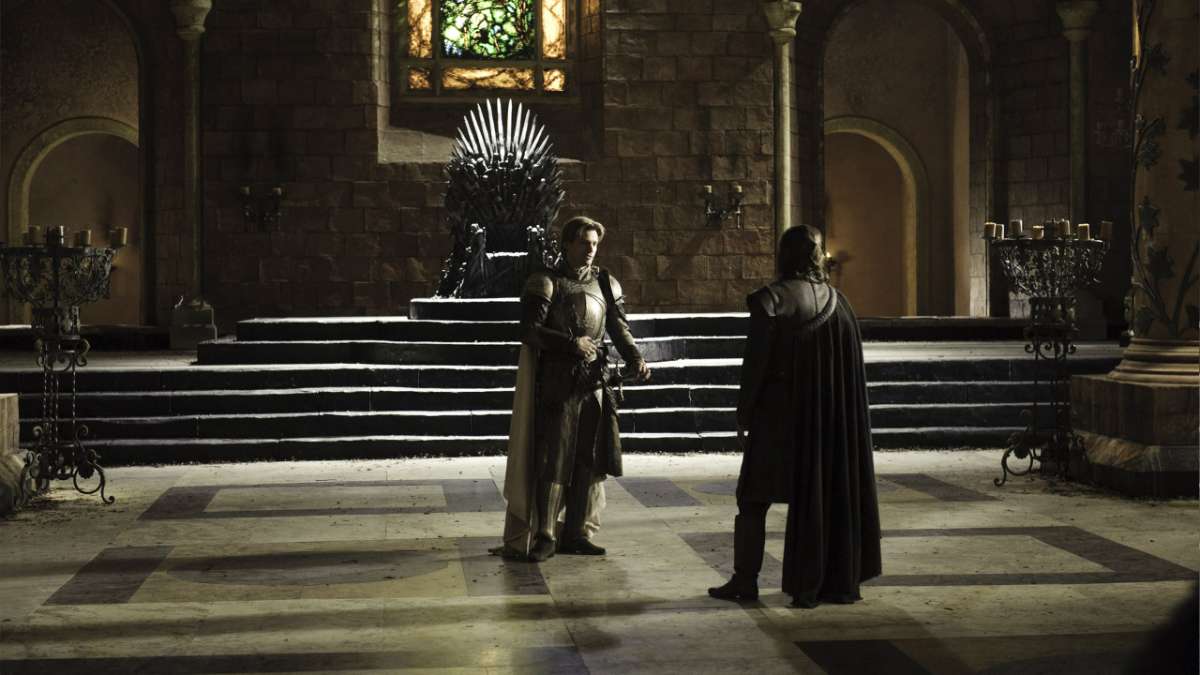 Jon impresses Tyrion at Castle Black; Ned confronts his past and future at King’s Landing; Daenerys finds herself at odds with Viserys.

We know from the very first scene for Arya in the season premiere that she isn’t like other girls, and Ned knows that better than anyone. At the end of “Lord Snow”, Arya starts to learn how to sword fight by lessons with Syrio Forel, and while it is an innocent sparring session that Ned walks in on and smiles at as he observes, he soon starts to hear real sword-fighting sounds in his head—foreshadowing danger in King’s Landing for the Starks.

“He said the same thing he’d been saying for hours: ‘Burn them all.’” – Jaime Lannister when King Robert asks what the Mad King said when he stabbed him in the back

Jaime Lannister and Eddard Stark mention only briefly the death of Eddard’s father and brother, Rickard and Brandon, by King Aerys II. In the novel “A Clash of Kings”, Jaime describes thoroughly to Catelyn how the Mad King killed them: Rickard Stark was taken to the throne room and suspended from the rafters, dressed in his armor, while a fire was lit beneath him. Then Brandon Stark was brought in, his hands chained behind his back, and around his neck a leathern cord attached to a device. His legs were left free, and his longsword was set down just beyond his reach. While Rickard was roasted alive slowly, Brandon tried to reach his sword so he could free his father, but doing so tightened the cord constricted around his throat. Thus Brandon strangled himself while helplessly watching how his father was burnt to death.

Tyrion spends most of his time at the Wall by mocking the Night’s Watch, but he isn’t malicious in his comments to Benjen and the others; he’s just truly skeptical about what kind of creatures are in the north. The biggest impact Tyrion has in the episode, though, is when he saves Jon Snow, as the jealous recruits hold a blade to the talented swordsman’s neck because he embarrasses them in the training yard, but they stand down when Tyrion mentions his sister, the Queen. Then, he humbles Jon by telling him that he was lucky enough to grow up in a great family and learn how to fight, unlike Grenn, Pyp, and Rast, which eventually leads to an important friendship with Grenn and Pyp.

Jaime Lannister telling of the moment he killed the Mad King and Benjen Stark telling Jon Snow he isn’t ready to be a ranger (if he knew he was actually a Targaryen and wanted to ensure he stayed alive) are also arguably #ForTheThrone moments, but Daenerys Targaryen being announced as pregnant with Khal Drogo’s child is directly related to the future of the Iron Throne. Dany’s brother Viserys was meant to become King before she would become Queen, but the young Targaryen was now set have a direct heir should she become the ruler of Westeros.