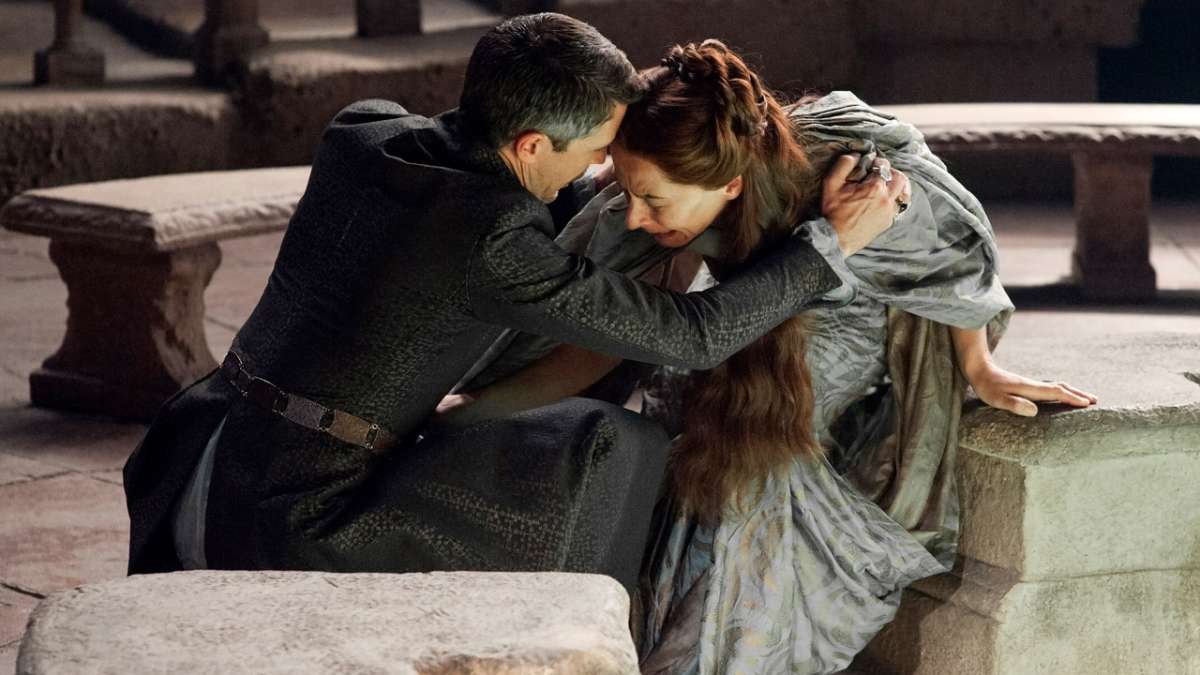 
Previous Episode: “The Laws of Gods and Men”

Tyrion enlists an unlikely ally. Daario entreats Dany to allow him to do what he does best. Jon’s warnings about the Wall’s vulnerability fall on deaf ears.

As noted in the “Inside The Episode”, Littlefinger and Lysa Arryn have probably been the two people that have had the biggest impact in putting the story in motion after poisoning Jon Arryn and pointing it toward the Lannisters. Littlefinger did it for his own selfish ambitions, but Lysa probably thought she and Lord Baelish were a pair the entire time. Jealous of her neice Sansa, Lysa (who is crazy) threatened her with the Moon Door until Littlefinger stepped in. After seemingly comforting his wife—“I have only loved one woman, only one, my entire life…”—Littlefinger delivers a big twist—“…your sister”—and shoves Lysa down the Moon Door. The moment shows the heartlessness of Littlefinger, who normally doesn’t get his hands dirty directly but did in this instance.

“I will be your champion.” – Oberyn Martell to Tyrion Lannister

The episode marks the halfway point of the series.

Because Jaime obviously couldn’t fight for him and Bronn didn’t want to risk it, it looked like Tyrion had no options left for his trial by combat against The Mountain. However, Oberyn Martell paid Tyrion an unexpected visit in the cell and told the story about meeting Tyrion after he had just been born: Oberyn knew Tyrion wasn’t a monster when he saw him—he’s just a baby—but Cersei wanted him dead because her mother died in child birth. Oberyn feels bad for what the Lannister dwarf has had to go through from the beginning of his life, but the main reason he wants to be Tyrion’s champion is to start his justice for his sister and her children. The relief on Tyrion’s face was evident, as The Red Viper gave him a very good shot of winning his trial.

The best moment of “Mockingbird” is also the biggest #ForTheThrone moment of the episode, as Littlefinger took another step up the ladder by gaining full control of the Vale and its powerful army after pushing his wife out the Moon Door. This was a relatively risky move by Littlefinger, who rarely does things like this himself, but it was a calculated risk that was set to pay big dividends if he wasn’t found of any wrongdoing in Lysa’s death—and he’d need Sansa Stark to have his back. It worked out, and Littlefinger now had a great stronghold and army at his disposal.