Home / frontgames / ‘Game of Thrones’ #ForTheThrone Countdown: “The Mountain and the Viper” (S4E8) 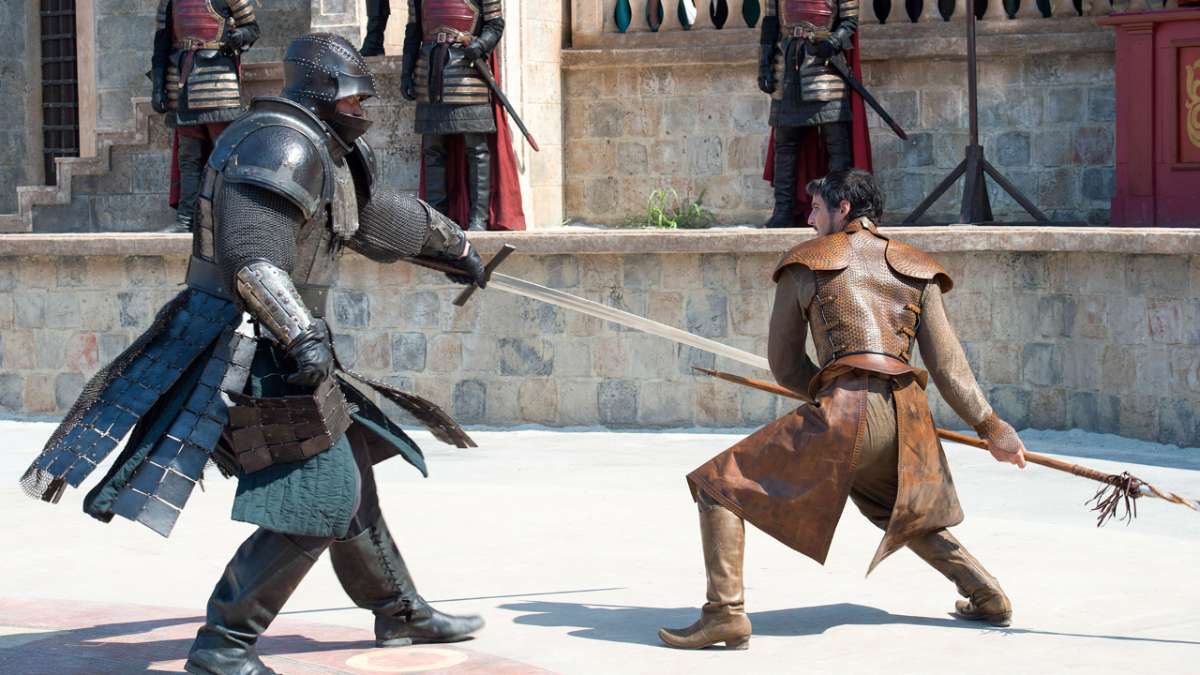 ‘Game of Thrones’ #ForTheThrone Countdown: “The Mountain and the Viper” (S4E8)

Episode: “The Mountain and the Viper” (Season 4, Episode 8)

Mole’s Town receives some unexpected visitors. Littlefinger’s motives are questioned. Ramsay attempts to prove himself to his father. Tyrion’s fate is decided.

Best Moment: The Mountain versus the Viper

One-on-one duels don’t occur every episode in Game of Thrones, but they are critically important when they do occur. Tyrion’s trial by combat, with Oberyn Martell (“Red Viper”) as his champion against Gregor Clegane (“The Mountain”), might be the most important of the series. Oberyn lives his life as free as anyone in Westeros, and he was not at all concerned about facing The Mountain; while Tyrion was frightened and nervous, and he comically told his champion he should be wearing armor and should not be drinking. However, Oberyn’s light and swift fighting style worked out to perfection, as The Mountain was no match for him. The fight went exactly as Bronn said it might in the previous episode if he fought for Tyrion: he could dance around until Clegane gets tired, then knock him down—“but one misstep…and I’m dead.” Unfortunately for Tyrion, that’s exactly what happened, as The Mountain somehow mustered the energy to sweep the overconfident Prince Oberyn to the ground before using his monster hands to smash his skull. It was a huge twist, as Tyrion was certainly going to get out of there alive while Oberyn got a start on his revenge, but it was quickly not to be.

“I’d have killed Joffrey with a chicken bone if I had to.” – Arya Stark

In this episode, Littlefinger says to Robin that people “die at their dinner tables […] in their beds […] on their chamber pots”. This is eerily prophetical, as the three major deaths that occur in King’s Landing over the course of Season 4—Joffrey, Shae and Tywin—take place at a dinner table, in a bed, and on a chamber pot respectively.

Ramsay Bolton is a candidate for MVP after being given the family name by his father for his work claiming Winterfell from Theon Greyjoy, but it goes to Daenerys Targaryen. Barristan Selmy received the royal pardon that Robert Baratheon had signed for Jorah Mormont, which led to Daenerys’ longest advisor having to explain himself. While we know Jorah truly had quickly become a loyal follower of his Queen, Dany made the difficult decision to banish Jorah because he betrayed her from the first. Jorah had really been the steady influence in Daenerys’ life—in the Season 1 finale, he was the first person she saw before she went into the fire and the first person she saw when emerging from the flames—but she made the best choice at the time, allowing Jorah to live, which eventually leads him back into her service.

#ForTheThrone Moment: The trial by combat

For the second straight episode, the best moment is also the main #ForTheThrone moment, as Tyrion’s trial by combat had big implications for the future of the Iron Throne. For one, the Lannisters would look relatively weak if the Dornish prince Oberyn defeated and killed The Mountain in one-on-one combat. But also, Tyrion, who had an interesting conversation with his brother Jaime about the purpose of it all before the trial, himself had found his purpose in some ways: he was good at politics and advising. If Tyrion won and lived—which happened despite Oberyn losing—he’d be able to continue doing what he’s good at, as he eventually does as an advisor to Daenerys Targaryen.