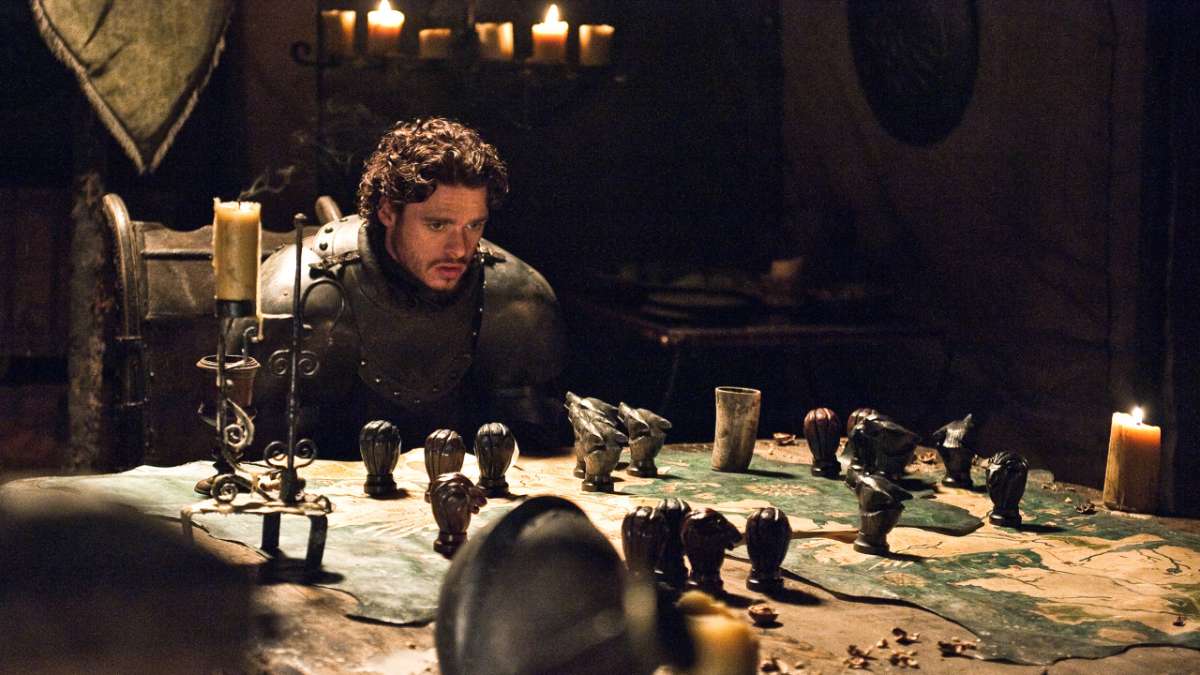 ‘Game of Thrones’ #ForTheThrone Countdown: “The Old Gods and the New” (S2E6)

Arya has a surprise visitor; Dany vows to take what is hers; Joffrey meets his subjects; Qhorin gives Jon a chance to prove himself.

There were many choices for best moment from “The Old Gods and the New”, including Tyrion slapping Joffrey (more on that later), Jon meeting Ygritte, and Daenerys losing her dragons (“WHERE ARE MY DRAGONS!?”). But Theon taking over Winterfell contrasted with Robb’s honor and leadership might be overlooked compared to the other big moments in the episode. Theon took over the home of the family that treated him almost like one of their own in a deceitful manner, telling a crippled Bran that the castle is now his. When Robb receives the news, he handles it like a true leader and wants to go back to Winterfell and reclaim it—but Roose Bolton successfully advises against it. The King in the North wants to look his former friend in the eye and ask why he did it—before killing him himself. Contrasted with Theon not wanting to perform the execution of Ser Rodrik, to then butchering it, and the differences between Lord Stark and the untrustworthy Greyjoy could not be more striking.

“We’ve had vicious kings, and we’ve had idiot kings, but I don’t know if we’ve ever been cursed with a vicious idiot boy king!” – Tyrion Lannister to Joffrey Baratheon

Aidan Gillen, who plays Littlefinger, told EW that he does believe his character recognized Arya with Tywin Lannister in “The Old Gods and the New”, stating: “It was unclear if he recognized her or not, but I have my own thoughts on that. Yes, I did recognize her — I just didn’t say anything or do anything about it.”

One of Game of Thrones’ funniest moments comes when Tyrion puts his nephew—and the King—Joffrey in his place. Joffrey received a major shock when a piece of cowpat was launched at him, starting a riot. The young King doesn’t handle the situation—during or after—well at all, but Tyrion gives him a quick lesson on the real world by letting him now that just because he’s the King does not mean he’s a god. Tyrion had slapped Joffrey before, but this time he slapped the King.

#ForTheThrone Moment: Robb agrees not to march back North

After Theon turned against the Starks and took Winterfell, the King in the North had a big decision to make that would have major complications in the War of the Five Kings. Robb’s instinct was to head back North and swiftly take back his family’s home, but Roose Bolton convinced Robb that his bastard would take the castle and keep Theon alive so the Young Wolf could kill him himself. This was an important moment #ForTheThrone, because the reason Robb decided against marching north is because he would have lost too much ground—he wanted to overthrow Joffrey despite not caring who sits on the Iron Throne.