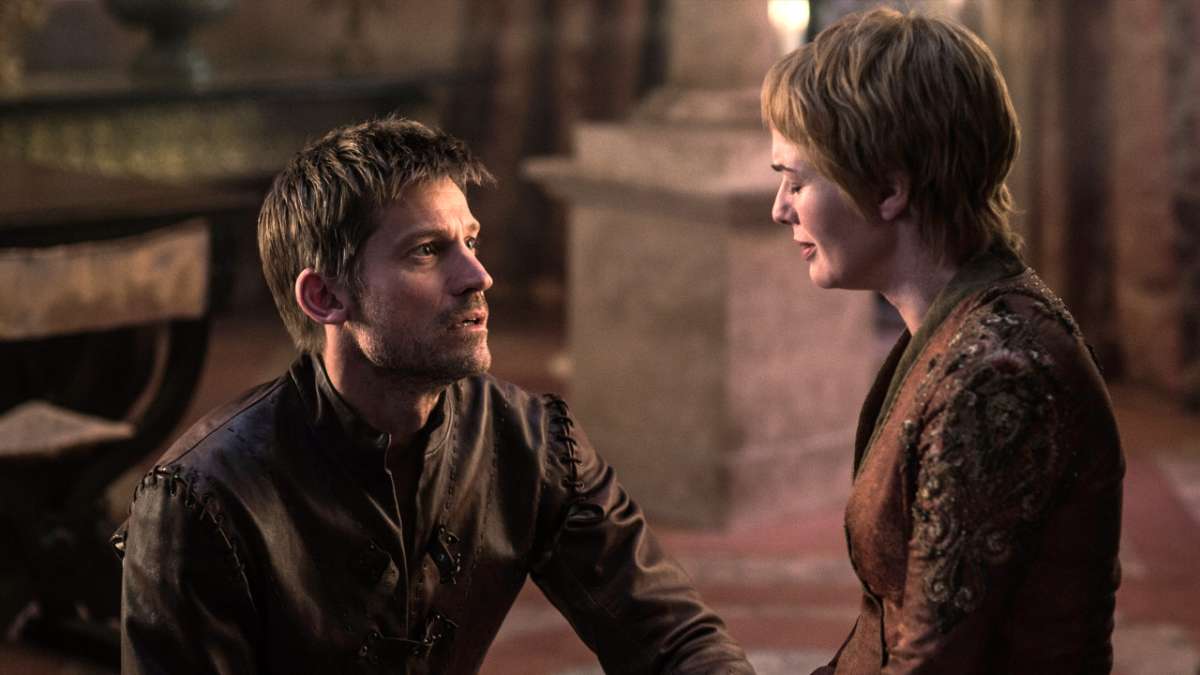 Following their escape from Winterfell at the end of “Mother’s Mercy”, Sansa and Theon are on the run from Ramsay’s men and dogs, and they’re both freezing after treading through icy water. It looks like they will be brought back to Ramsay when the Bolton men catch up, but two horses come stomping in—with Brienne and Podrick riding them. The two are able to kill all the soldiers with the help of a sword-wielding Theon for the final kill, and then Brienne offers her services for the second time to Sansa. She gave the same oath that she previously gave to Catelyn Stark, and Sansa accepts with some help from Pod to recite the words: “And I vow that you shall always have a place by my hearth and meat and mead at my table, and I pledge to ask no service of you that might bring you dishonor. I swear it by the old gods and the new. Arise.”

“He thrust a terrible choice upon us… and we made it.” – Alliser Thorne on the decision to assassinate Jon Snow

In order to play Arya Stark as blind, actress Maisie Williams wore large, 16-millimeter contacts that she could not see through.

Brienne, Pod, and Theon all stepped up for Sansa with the Bolton men chasing her, but at Castle Black, Ser Davos started off the season by finding Jon Snow’s lifeless body in darkness and getting some loyalists of the Lord Commander to bring him inside. That allowed the battle lines to be drawn for the Night’s Watch, and having Ghost there with Edd and the others kept the traitors away. Also, even though he has been her adversary for the entire series, Davos suggests that Melisandre could do something to bring Jon back—and we get a significant glimpse at the Red Woman’s magic in the final scene of the episode.

#ForTheThrone Moment: Jaime promises Cersei they will take everything back

The first episode of Season 6 is very much a set-up episode, so there isn’t a huge #ForTheThrone moment. After everything that happened to her and then Jaime finally arrived back from Dorne with a dead Myrcella, Cersei might have been at her lowest point. With two of her three children dead, the Lannister queen told her brother of the childhood prophecy which she believed was fate—but Jaime wasn’t buying it. The “Kingslayer” said to forget everyone else and that they’re the only two people in the world that matter—they would take back everything that’s been taken from them, and more. The power play by the Sand Snakes in Dorne was also in consideration for the #ForTheThrone moment.