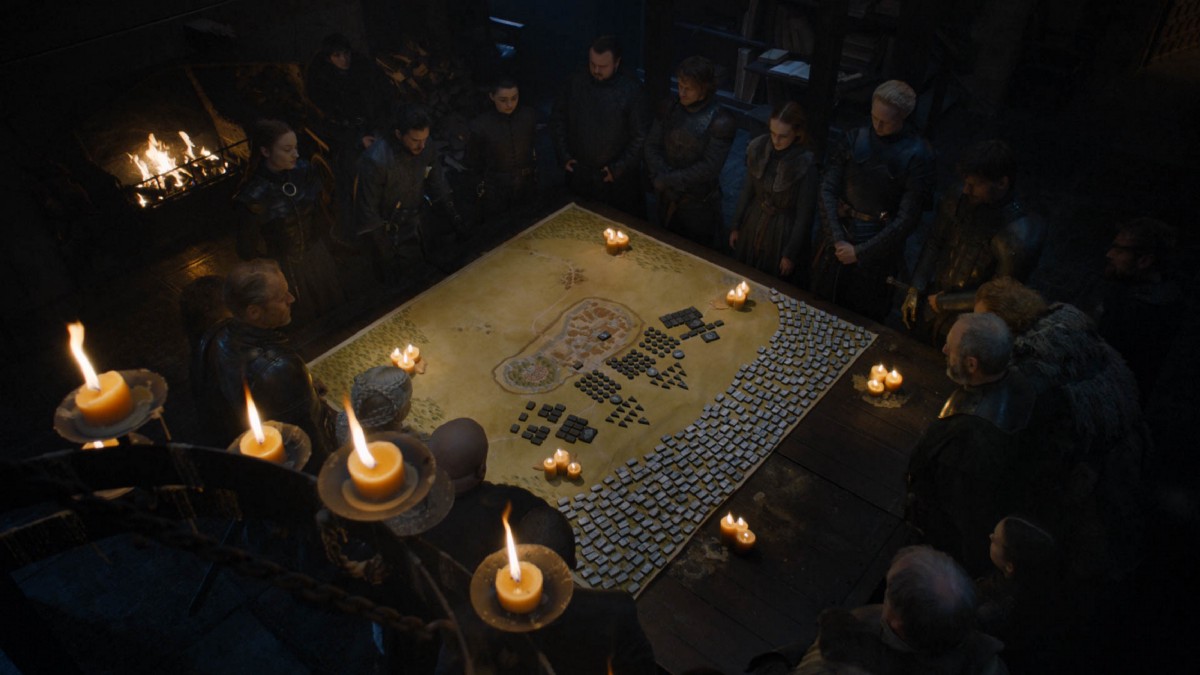 
The Army of the Dead has arrived at Winterfell after “A Knight of the Seven Kingdoms” showed the night before the biggest battle of the Great War. A lot might change next week if and when people die defending the castle, but where do the characters stand for the Iron Throne after the second episode of the final season of Game of Thrones? You can also check out our recap for “A Knight of the Seven Kingdoms.

Bran is being used as bait to draw out the Night King, so he’s obviously in a very risky position ahead of this Sunday’s episode; but as the Night King’s primary target, the Three-Eyed Raven will have a lot of protection—led by Theon Greyjoy on the ground at the godswood, and likely with help from Jon Snow riding Rhaegal in the sky. Overall, Bran drops a spot in the Iron Throne power rankings because he again showed he doesn’t care about politics when he told Jaime that he’s not angry about what happened between them years ago.

Thanks to Brienne of Tarth, Jaime Lannister lives to fight another day—but it might just be one more day with the dead lined up across from Winterfell. A one-handed man fighting against White Walkers isn’t ideal, but the Lannister knight does have a Valyrian steel sword (Widow’s Wail) and plenty of experience on the battlefield. If there’s any chance for good karma in Game of Thrones, Jaime probably has it with the way he’s acted—including knighting Brienne.

The weapon created by Gendry just for Arya was completed in time for the Battle of Winterfell, and the bastard son of Robert Baratheon and the daughter of Ned Stark could make an interesting power couple if they’re both able to survive against the Army of the Dead. As a Faceless Man, Arya is as skilled and prepared as anyone ahead of the battle—though based on the Season 8 trailer, it looks like she’s going to have a tough situation to get out of.

There were no King’s Landing scenes in “A Knight of the Seven Kingdoms”, so there was no sight of Euron. He appears to be out of the reach of the Night King for now, so he remains in the same spot as last week.

Tyrion does have battle experience and expertise that could truly help the living in their fight against the dead, but he didn’t have much say in the matter when Queen Daenerys declared he would be staying in the crypts. At least to start the battle, Tyrion will be out of harm’s way, but it won’t be surprising if the Hand of the Queen eventually makes his way to the battlefield if things aren’t going well for his friends.

The Lady of Winterfell will definitely remain in the Crypts of Winterfell, so she’ll be safe if the Stark and Targaryen forces are able to hold off the Army of the Dead. Sansa has experience waiting out a battle from back in Season 2 during the Battle of the Blackwater, so she’ll likely be a calming presence for everyone as the chaos ensues outside.

Jon finally found the opportunity to tell Daenerys the truth at the conclusion of “A Knight of the Seven Kingdoms”, and the Targaryen Queen looked like she couldn’t believe—and certainly didn’t want to believe—what she was hearing. Dany now has this hanging over her as she prepares to fight in the battle of her life against the Army of the Dead. The Mother of Dragons will be riding Drogon, but she has a disadvantage of not having any known skill with a sword or weapon if she’s forced to the ground at any point.

Cersei rises a spot in the Iron Throne power rankings, as she’ll just sit comfortably in King’s Landing sipping wine while her enemies fight in the North. It’s possible the top two are just her and the Night King next week.

We didn’t see the reaction from Daenerys about the news, but it’s known that the Night King has an ice dragon Viserion based on Tormund and Beric witnessing the Wall come down at Eastwatch in the Season 7 finale. And we haven’t actually seen the Night King yet in the final season, but he’ll be coming for Bran and the rest of the remaining heroes at Winterfell, with Viserion as a major weapon of mass destruction.

Again, as appeared to be the case shortly after he learned the news from Samwell Tarly, Jon Snow looks receptive to the idea that he’s the rightful king—probably because he knows he’d be a good king and because the crown is his by right. The Stark-Targaryen probably doesn’t think it’s proper to simply give his crown to Daenerys (just as Ned didn’t think Stannis should be bypassed for Renly), but his immediate order of business will be surviving against an enemy he’s been up against twice already. Jon might be on Rhaegal initially, but single combat against the Night King seems like a real possibility during the Battle of Winterfell.