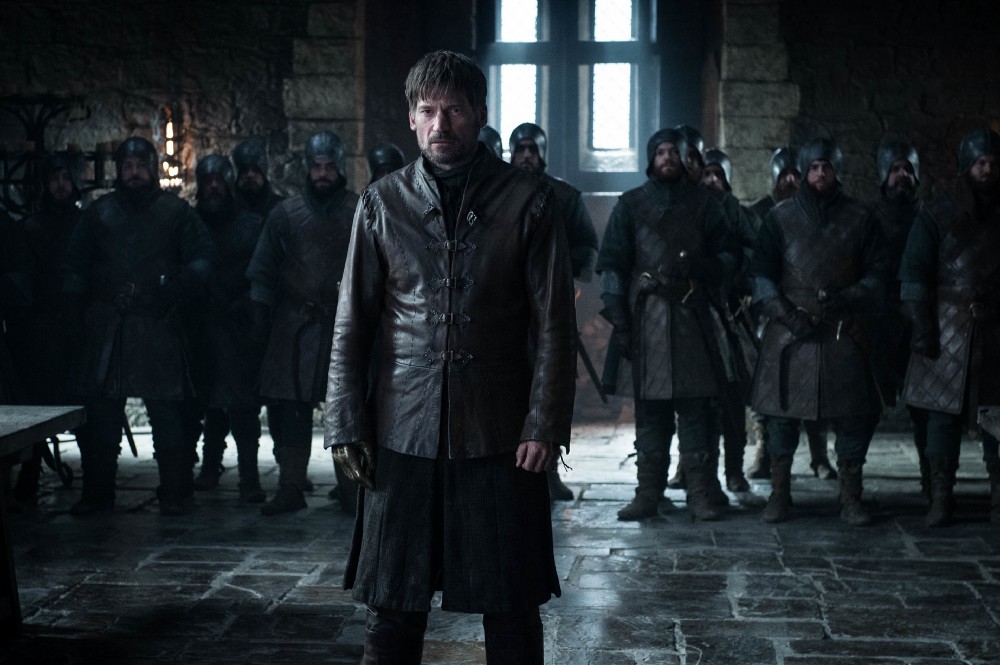 ‘Game of Thrones’ Season 8, Episode 2 Recap: “A Knight of the Seven Kingdoms”


“A Knight of the Seven Kingdoms” focused solely on Winterfell, as there was no Cersei Lannister or events in King’s Landing while the Stark and Targaryen forces prepared for battle against the Army of the Dead. The episode masterfully displayed the eve of what’ll probably be the biggest battle of the Great War. Again, this recap will mainly lay things out and clear things up and will be light on speculation and theories, as it’s probably better to just let the story unfold.

Episode: “A Knight of the Seven Kingdoms”

Jaime faces judgement and Winterfell prepares for the battle to come.

From when we first met Brienne of Tarth, she had always wanted to be a knight, but she was never accepted as a true warrior because she was a woman—despite the fact that she is one of the best fighters in world. She nobly served Renly Baratheon, Catelyn Stark, and Sansa Stark, and she defeated The Hound in single combat; also, she is probably far more honorable than any of the knights left. Brienne deserved to be knighted, and it was fitting that it was Jaime that was the one to fulfill her lifelong dream. It was also cool to see Tyrion, Tormund, Davos, and Podrick give the first woman knight of the Seven Kingdoms a standing ovation, and you could see the joy on Brienne’s face—she didn’t need thousands of people to see her get knighted, she was just happy it finally happened.

“I want to fight for Winterfell, Lady Sansa, if you’ll have me.” – Theon Greyjoy

Perhaps the best television arc in history continues with Jaime again showing how far he’s come from the beginning of Game of Thrones. Brienne reminded us that he lost his hand defending her honor, and that he kept his vow to Catelyn Stark to ensure her daughters would return home safely. Jaime then tried to somewhat make things right with Bran, who wasn’t angry with him anyway; and he also was back to normal with Tyrion despite promising to split him in half for killing their father, enjoying some wine along with the company of his brother and the others on what could be their final night. The Kingslayer’s humbleness was on full display when he asked Brienne if he can serve under her command. Finally, Jaime fully accepted Brienne when he knighted her, making the lady the first woman knight of the Seven Kingdoms; with the ultimate threat on the way, this might have been Brienne’s final chance to become a knight, and it happened thanks to Jaime.

-This was obviously another set-up episode ahead of next week’s Battle of Winterfell, but it was very well done. “A Knight of the Seven Kingdoms” had heart throughout the 58 minutes, and it might have been the funniest episode of the series.

-If Brienne didn’t step up for Jaime, convincing Sansa that he should be allowed to stay, it would’ve been up to Jon or Bran to get the Lannister knight out of that situation. And it was interesting that Sansa pretty much took control of the de facto trial, as things turned in Jaime’s favor after the Lady of Winterfell agreed with Brienne.

-As Jaime approached to talk to Brienne, it was great to see how far Podrick had come as a fighter—he looked impressive and extremely confident while helping others train, showing that Brienne was an excellent teacher.

-Jorah Mormont’s advice to his queen about both Tyrion and Sansa was welcome advice for Daenerys. While Tyrion is Dany’s Hand, Jorah has been an advisor to the Mother of Dragons from the beginning of her journey, and he can be trusted by her more than anyone.

-Daenerys attempting to build a relationship with Sansa went as well as you can expect, as she used their common love for Jon and their similarities of ruling as women in a man’s world to get Sansa to warm up to her. However, they both instantly turned cold when the subject of the North’s independence was brought up. Daenerys does not appear at all willing to give the North what they want, at least not yet.

-Theon Greyjoy’s redemption in the final season has been amazing, and his returning to Winterfell and asking to fight for the Starks and Winterfell was in strong consideration for the best moment of the episode. When Theon returned to the castle in the presence of Sansa and Daenerys, he really looked like Theon Greyjoy and nothing like “Reek”. It was also interesting here that Theon directly addressed Sansa about fighting for Winterfell in the Great War instead of fighting for Queen Daenerys. Theon will have a critical role to play in the Battle of Winterfell next week after volunteering to defend Bran against the Night King at the weirwood tree.

-The battle plan scene clearly lays things out for next week in what’s sure to be a chaotic 82 minutes. The living know the odds are not great, and many people will die, but the points of emphasis are: holding off the dead from getting into Winterfell and killing the Night King, which will hopefully cause all of the dead to fall because he turned them all.

-Lyanna Mormont insisted to her cousin Jorah that she doesn’t care if she’s the future of their family; she’ll be fighting with everyone else when the dead arrive. A little girl with what appeared to be greyscale that was stopped (or at least some type of scarring)—clearly reminding Davos of Princess Shireen—also wanted to help in the fight, but Davos and Gilly were able to convince her that she could protect the crypts in a nice moment.

-With Samwell Tarly giving his family’s ancestral sword, Heartsbane, to Jorah, there are now four people with Valyrian steel swords ahead of the fight against the Army of the Dead: Jon (Longclaw), Jaime (Widow’s Wail), Brienne (Oathkeeper), and Jorah (Heartsbane). And Arya has the Valyrian steel dagger. For those that forgot, Valyrian steel can kill White Walkers, as can dragonglass.

-Podrick singing the original “Jenny’s Song”, which is from the A Song of Ice and Fire books, helped perfectly display the calm before the storm toward the end of what was a beautifully-laid-out episode.

-“A Knight of the Seven Kingdoms” focused on what many of the other people at Winterfell were doing in preparation for battle and was pretty light on Daenerys and Jon, likely because the Warden of the North was avoiding Dany until the right moment came for him to tell her the truth. As Jon was telling the story of Lyanna and Rhaegar in the Crypts of Winterfell, you could see Daenerys’ face start to turn as she became appalled at what she was hearing. Three horns blasted as the dead lined up across from Winterfell, giving the two no time to continue their discussion, but it didn’t look like Jon was too willing to just say Daenerys could be the one to sit on the Iron Throne. Depending on what happens in the Battle of Winterfell, there might just be one (or none) of them left pretty soon anyway.