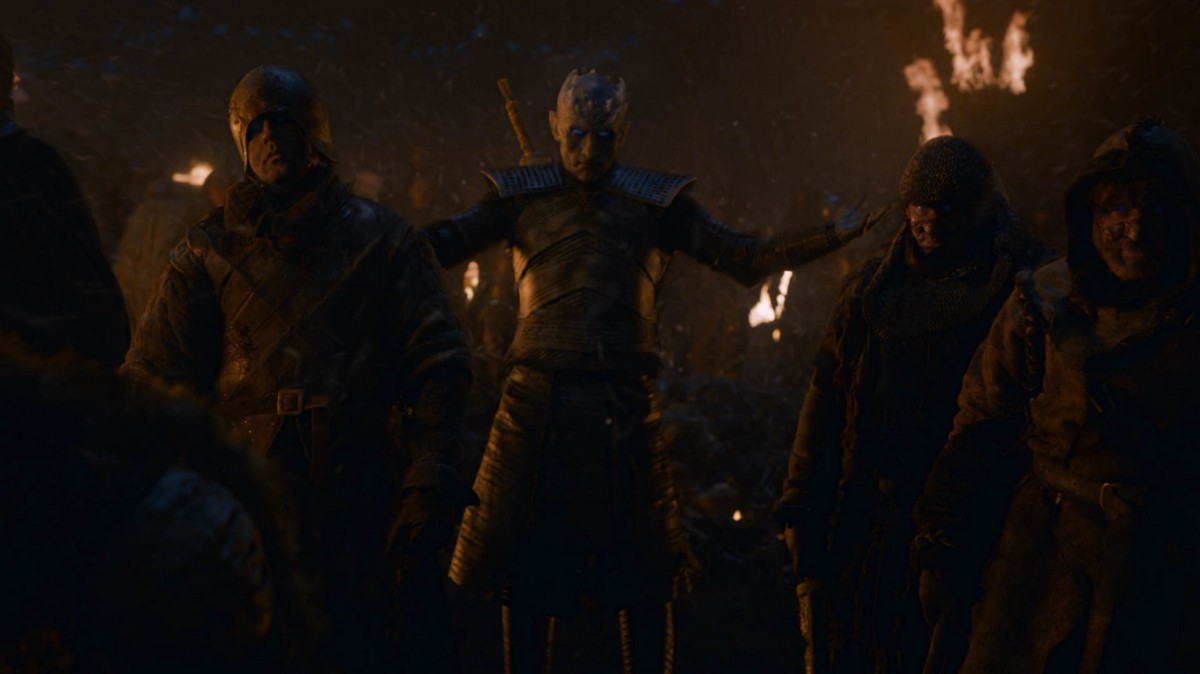 
“The Long Night” might not have been the best episode of Game of Thrones, but it had immense hype to live up to as the Battle of Winterfell, the biggest battle in the series, and it was an intense 82 minutes with suspense, horror, action, and drama shot over an 11-week period. Many theories came to an end with the death of the Night King, but this recap will again be light on speculation and theories as the final three episodes play out with the final war.

Previous Episode: “A Knight of the Seven Kingdoms”

Winterfell fights the Army of the Dead.

There was so much going on during “The Long Night” that hopefully by the time the Night King made his way to the Godswood to kill the Three-Eyed Raven you forgot that we hadn’t seen Arya in a while. The slow, dramatic buildup—with perfect music, as usual—to the moment made it seem as if the Battle of Winterfell would be lost, with our heroes facing a relentless enemy led by a seemingly unstoppable leader in the Night King. Theon Greyjoy made one last charge and was killed; Jaime, Brienne, and the others inside the castle were barely surviving; the crypts were being taken over by the dead; Daenerys looks like she would be defeated in a matter of time; and Jon simply couldn’t get past Viserion to get to the Godswood. When the Night King reached for his ice spear to strike down Bran, it looked like the bad guys would win again in Game of Thrones—until Arya came flying out of nowhere. But the Night King caught the Stark girl by the throat, making it appear that a brief moment of hope would be ended quickly before a skilled maneuver by Arya got the Varlyian steel dagger to her other hand, allowing her to destroy the Night King, shattering the ultimate enemy and the Army of the Dead to end the Great War.

-Army of the Dead

Episode MVP obviously could have gone to Arya for killing the Night King, but the fallen in the Battle of Winterfell should get recognition. Everything that happened in the battle helped lead to the exact moment of Arya being able to kill the Night King, and thousands were sacrificed in the process. Edd was the latest Lord Commander of the Night’s Watch to fall after saving Sam. Lyanna Mormont went out heroically while killing a zombie giant. Beric Dondarrion helped the Hound spring into action when he didn’t want to, and they then saved Arya, who would later kill the Night King. Theon Greyjoy more than made up for what he had done in the past, and he died bravely charging the Night King. And Jorah Mormont did as he’s done for years and defended Daenerys to his last breath. Melisandre even returned and had a huge impact on the Battle of Winterfell, fulfilling her role in the Great War.

-Melisandre knew she still had a role to play, and she delivered after arriving just in time for the Battle of Winterfell. The theme of fire to fight the Army of the Dead was awesome, and it started with the Red Woman setting the Dothraki arakhs ablaze. In middle of the battle, she slowed the enemy by finally lighting the huge trench around the castle after continuously muttering a prayer in Valyrian. Melisandre was right about being needed as an ally in the battle against the Night King.

-After seeing Ghost in “A Knight of the Seven Kingdoms” last week, it was good to see him again at the Battle of Winterfell—but it’s unclear if he survived. It was cool seeing Jon’s direwolf charge the Army of the Dead alongside Jorah, but we did not see him return from that initial attack with Jorah. Hopefully they just didn’t show Ghost come back with the several others that did, but we’ll probably find out next Sunday.

-At the start of the battle, the plan instantly fell apart when Dany couldn’t stand to just watch the Army of the Dead slaughter her Dothraki soldiers. Jon wanted to stick with the plan and wait for the Night King to arrive on Viserion so they could face him together using Drogon and Rhaegal, but good for Daenerys springing into action. As appears to be the case judging by the preview for next week’s episode, the Dragon Queen likely gained a ton of support in the North following the Battle of Winterfell.

-The battle plan didn’t work out, and there were many ebbs and flows during the fight between the living and the dead—as is the case with real-life battles. The dragon fire did a number on the wights, and everyone below probably would’ve died if Jon and Dany waited any longer to join the battle in the beginning.

-Another thing that made the Battle of Winterfell more realistic was that the deaths of some key players—like Beric Dondarrion and Jorah Mormont—didn’t end with feel-good final moments or words. Both Beric and Jorah appeared to try to get out final words, but it just wasn’t to be.

-The moon isn’t shown often in Game of Thrones, and that was an astonishing scene in the sky as Jon and Daenerys waited for the Night King amidst the chaos below. There wasn’t much fire used between the three of them against each other—Viserion was doing most of the fire-attacking with his blue flames—but the dragon fight was intense.

-Even before her final kill in “The Long Night”, Arya was a beast throughout the battle, carving through wights better than anyone when she was at 100%. But she had to use her skills to escape multiple enemies in the Winterfell library while dazed from hitting her head. After getting away with the help of Beric and the Hound, a waiting Melisandre then also helped plant the idea in Arya that she might be the one to kill the Night King.

-Overall, there was a horror vibe in the crypts, but the moments between Tyrion and Sansa were nice, and they had one of the best parts of the episode when they gave each other an emotional knowing look as they grabbed hold of their dragonglass daggers and prepared to face the enemy. The acting in Game of Thrones is always great, but thanks to Peter Dinklage and Sophie Turner in this moment in particular, it was arguably the saddest part of the episode; but thankfully both the Lady of Winterfell and the Hand of the Queen survived.

-Jon in single combat against the Night King would have been insane, and it looked like it might happen there for a minute; but again, things don’t always just line up perfectly like that in real battles. And when the Night King rose his army again, that’s when things really started to turn in favor of the dead.

-Daenerys looked like she was going to meet her end when Drogon was forced to retreat to avoid getting killed by dozens of wights, leaving his mother alone with no protection—but Jorah again saved his queen one last time. She always does her fighting on Drogon, but Dany showed she can handle a weapon, which was great—though she really had no choice if she was going to survive.

-Jorah’s death was very sad, but it was perfect that he was killed while protecting his queen. Daenerys and Jorah had been together so much throughout the series, so this was one of the toughest goodbyes possible—and it must have been tough for Iain Glen and Emilia Clarke.

-Theon’s return to Winterfell in “A Knight of the Seven Kingdoms” was fantastic, and his redemption continued as he defended Bran at the Godswood. Both before and after Theon defended him from the wights, that was about as affectionate as Bran can get, as he told him that what he did brought him to where he belongs: home; and then he thanked him and said he was a good man, which is probably the best thing Theon could have heard from a Stark. He certainly went off track and was truly lost for a bit, but Theon had an outstanding character arc—along with Jaime and maybe Sansa, probably the best in the history of TV or film­—and would’ve made his “real father” (Ned Stark) proud in the end, just as he made Bran and Sansa proud with his recent actions. It’s chill-inducing to think about the character of Theon, and Alfie Allen’s acting was as good as anyone on the show.

-Eventually, the Night King fell, but it was just staggering to see him in his most extensive action during the Battle of Winterfell. He was at his most arrogant and confident during “The Long Night”: dragon fire did nothing to him, and he didn’t even need his White Walker lieutenants to do serious damage and breach the walls of Winterfell—but they did accompany him on his way to the Godswood, where he was as intimidating and menacing as possible. Despite only several appearances in the show, the Joker and Darth Vader can move over: the Night King is the greatest villain of all-time.

-Kit Harington admitted he was kind of mad at first when it wasn’t him that would kill the Night King, which is what you would expect to happen because Jon has always been the hero in Game of Thrones. But Arya flying through the air out of nowhere to deliver the final blow to the Night King was perfect. Arya had been training for a moment like this for a while, and it paid off when she ended the Great War.

-Melisandre completed her task, and she was ready to die in that country, as she told Varys she would do at Dragonstone in Season 7. For those confused, Melisandre is centuries old, but it was her necklace that kept her young—as was shown in the Season 6 premiere, “The Red Woman”. Carice van Houten was tremendous as the Red Woman, and her death after the victory in the Great War—which she was needed for against the only enemy that matters—now leads us to the final war.

-It’s 40 minutes, but “The Game Revealed” for the episode is worth your time: