Home / frontgames / ‘Game of Thrones’ Season 8, Episode 4 Recap: “The Last of the Starks” 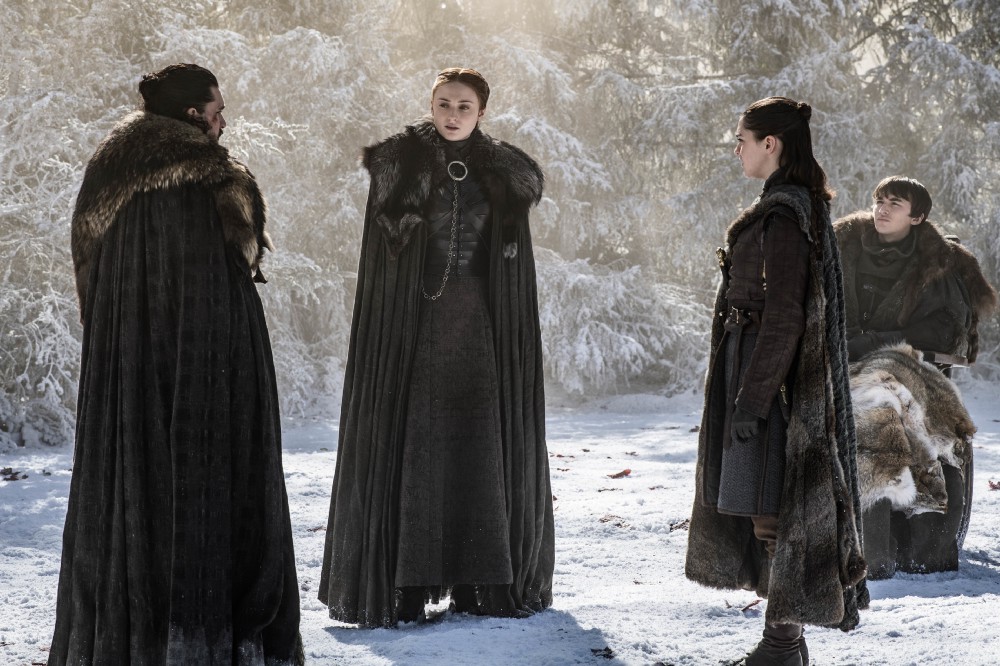 ‘Game of Thrones’ Season 8, Episode 4 Recap: “The Last of the Starks”


Picking up in the aftermath of the Battle of Winterfell, a lot happened in “The Last of the Starks” as we approach the final two episodes of Game of Thrones.

Episode: “The Last of the Starks”

The survivors plan their next steps; Cersei makes a power move.

Many scenes and events are in consideration for the best moment of the “The Last of the Starks”, including the death of Rhaegal. But the best moment is probably the parley at the very end of the episode, which unfortunately ends with the death of another key character and an important friend/advisor to Daenerys. Tyrion badly wanted to avoid any bloodshed—especially to the people of King’s Landing—so he put himself on the line and tried to plead with his sister to think about her child. For a moment, it looked like Cersei was at least slightly moved, but she’s simply too far gone at this point and believes giving up the Throne would mean surrender and death. A prisoner from the earlier attack and sadly back in chains again to end her life, Missandei’s final word was a powerful “Dracarys”, letting her queen know that she must win the Last War and complete her long quest for the Iron Throne. After the swift swing of the blade from the Mountain, Grey Worm obviously looked sick to his stomach—Missandei (and Daenerys as his queen) basically taught him what it was to be human, and now she’s gone. As always, there was great acting from Lena Headey, Peter Dinklage, Nathalie Emmanuel, and Jacob Anderson, but Emilia Clarke’s seething reaction as Daenerys to end the episode—leading us to the penultimate episode—was really exceptional.

“They were the shields that guarded the realms of men, and we shall never see their like again.” – Jon Snow

Things went terribly for Daenerys in “The Last of the Starks”, and Euron Greyjoy had the most to do with it after using The Silence and the Iron Fleet to attack the Targaryen ships as they arrived near Dragonstone. Euron was able to kill a dragon—something only the Night King had been able to do—using the bigger Scorpion weapons to send Rhaegal crashing into the water after three devastating bolts. Killing Rhaegal was a big enough win for Euron in the episode, but then Cersei told him she was pregnant with their son (although it’s actually Jaime’s child), seemingly fully accepting him.

-Daenerys (Jorah) and Sansa (Theon) both had tearful goodbyes to open “The Last of the Starks”, with the Lady of Winterfell placing a Stark pin on Theon in an emotional moment that she probably wished happened while the Greyjoy was alive.

-He had some battle scars—as almost everyone did—but it was awesome to see Ghost did indeed survive the Battle of Winterfell. Everyone looked utterly exhausted after the battle, especially Jon.

-Jon’s gave an amazing speech about the thousands that had died defending Winterfell, incorporating words from the Night’s Watch into the final moments before the pyres were lit in a massive fire. It was a regal moment that made the rightful king look fit for the Iron Throne.

-The feast after the battle was subdued and restrained at first, but Queen Daenerys got things going when she proclaimed Gendry as Lord Baratheon of Storm’s End. It was a bit of a slick power move by Daenerys, showing that she’s in control, has the ability to proclaim such things, and is not threatened by Robert Baratheon’s son while also getting a grateful life-long ally at Storm’s End. From there, everyone started enjoying themselves—except Daenerys after seeing that the North loves Jon (it was hilarious when Tormund was talking about Jon being a “madman… or a king” for riding a dragon) but still hasn’t fully accepted her, which Varys takes note of. As is always the case in scenes with so many key characters, it was likely tough to shoot and act, as things in the background and things that are being said without actually being said are as important as the dialogue.

-It looked like Arya—the big hero after killing the Night King yet practicing her marksmanship instead of celebrating with the others—would say yes to a now-legitimized Gendry’s marriage proposal, but that’s just not who Arya is, especially with more work to do with Cersei still alive.

-That was high-class drama in the scene between Jon and Daenerys after the feast, with Dany begging (which is very uncommon for her) Jon to keep his true parentage a secret. While he’s actually Aegon Targaryen, Jon was raised a northerner by Ned Stark, so he simply doesn’t think it’s right to be with Daenerys (his aunt), and he also doesn’t think the truth is something he should keep from his family; meanwhile, Daenerys would be fine with the both of them just forgetting that they are related (though she did seem to wish that they weren’t related for more than just birthright, as she’d probably prefer to fall in love with someone other than her nephew despite her family history). It’s tragic for Daenerys because she’s finally found an equal to her, but now she’s being turned down because an underlying truth came to light.

-The relationship between Brienne and Jaime is also heartbreaking, as they both appeared to be happy together in Winterfell. But Jaime, who appeared done with Cersei after she refused to help in the Great War, has an addiction to Cersei and can’t stay away from her. And while Jaime has certainly had his share of redemption and heroic moments, he’s a true Lannister that’s put his family above all else and has done some terrible things because of it—he’s accepted that.

-I thought Bronn might’ve just killed Tyrion and Jaime right then and there at Winterfell, which would’ve been a terrible way for the Lannister brothers to go out. That long-standing offer from Tyrion of doubling whatever someone else was paying him came back up, as Daenerys’ Hand was forced to offer High Garden to Bronn. The selfish sellsword might come into play during the Last War by joining whatever side looks like it’s going to win, though it looks like Jaime might be off Cersei’s hit list as he returns to the capital.

-The plan, which was blown up by Euron’s attack by Dragonstone, was for Daenerys and Tyrion to ride to White Harbor and then sail for Dragonstone, while Jon and Davos march the army down the Kingsroad. By surrounding King’s Landing and using the dragons to destroy any ships that try to bring supplies, they would keep resources from entering the city, which would eventually turn the people against Cersei, causing minimal bloodshed. After the deaths of Rhaegal and Missandei, that won’t happen now.

-Jon sided with Dany against Sansa during the planning of the Last War, and the remaining Starks—Jon, Sansa, Arya, and Bran—all met in the Godswood, where Arya said she respects Jon’s loyalty to Daenerys but still doesn’t trust her. Because of Jon’s love for Sansa and Arya, it was unlikely he would be able to keep his true parentage a secret despite Daenerys pleading with him to do so. Arya can probably be sworn to secrecy, but it was going to be difficult for Sansa—who wants to do what she believes is best for her family and the North—to keep the information to herself after learning all about “the game” from Littlefinger and Cersei; she knew what would happen after she told Tyrion.

-The Hound had a couple of good moments with the Stark sisters, and though extremely rough around the edges, he’s set up as a good guy entering the war against Cersei (and his brother the Mountain). It was interesting that Arya told the Hound that she won’t be returning to Winterfell, as it’s unclear where she might rather go assuming she survives this upcoming battle.

-Jon’s farewells with Tormund and Sam (and Gilly, who is pregnant with Sam’s baby) were tough, as they’d been two of his closest friends for years. The former Lord Commander wishes he could go north of the Wall with Tormund, but he’s asked his wildling ally to bring Ghost with him—this is a call back to the first episode of the series, when Ned said direwolves don’t belong south of the Wall. Also, Sam and Gilly revealed that they’re going to name their child after Jon if it’s a boy. These goodbyes could be the last time we see Jon together with Tormund and Sam, but (skip the rest of this paragraph if you don’t want speculation on Jon’s potential end) perhaps Jon will decide he wants to live north of the Wall if he’s able to survive his trip south. His goodbye to Ghost was just a nod, though maybe he would’ve gotten too emotional if he went over to embrace his longtime companion.

-Rhaegal’s death was awful, as he took three bolts while Daenerys helplessly watched a child die out of nowhere for the second time. Dany’s anger got the better of her for a moment, as she nearly got herself killed attempting to immediately redeem Rhaegal before narrowly escaping bolts intended for Drogon. Clearly, Dany is as motivated as possible as she attempts to defeat Cersei’s army and finally take the Iron Throne.

-It’s possible Jon would be a better ruler, but Daenerys was loved by the people in Essos (as she said to Jon when talking about not getting that in Westeros) and would probably be loved by the people of King’s Landing, too. Varys (and Tyrion to a lesser extent) plotting behind their queen’s back is setting up a potential tragedy, with the Spider hinting that killing the Dragon Queen might be the best course of action for the realm.