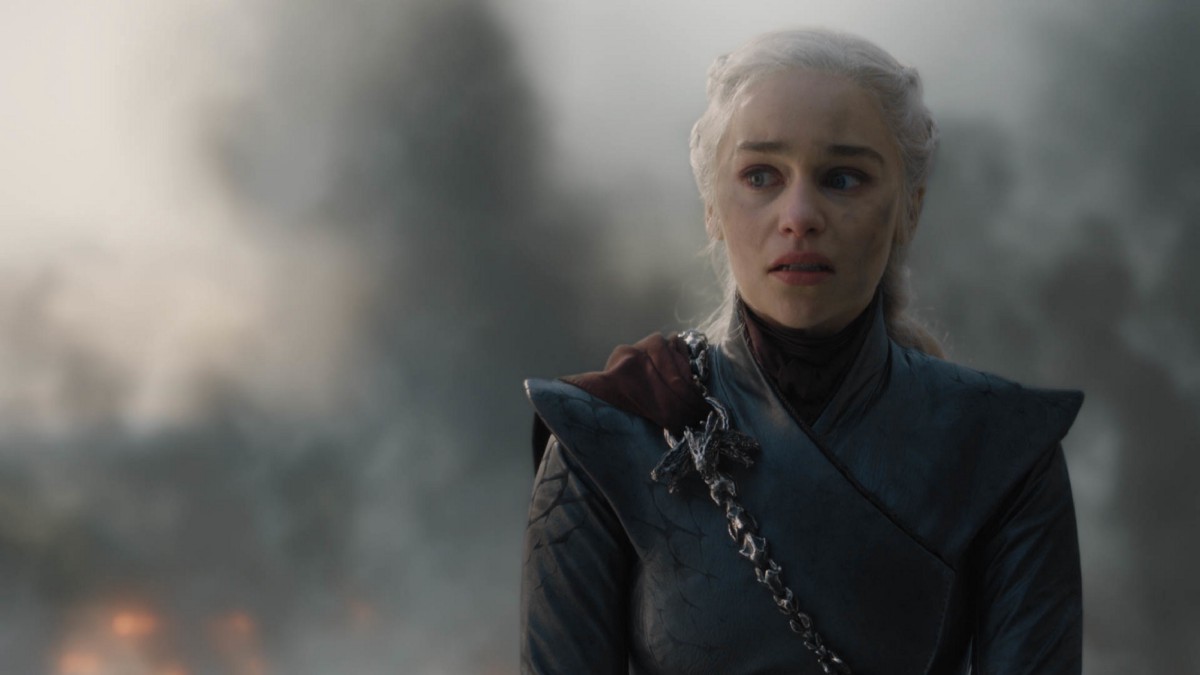 
Wow. The penultimate episode of Game of Thrones was one of the most shocking and distressing episodes of the series, as Daenerys Targaryen finally made her attack on King’s Landing. I have not checked Twitter or other parts of the internet for months because of all the negativity, and I am not looking at IMDb after the recent crazy-low user ratings Season 8 episodes are getting, but I suspect people did not like “The Bells” because of the Daenerys twist. Many people cheered for Dany to eventually take the Iron Throne before this, so her actions are disappointing; but the realistic anything-can-happen scenarios are part of what make Game of Thrones great. Remember, this is a show that killed off Robb, Catelyn, and Talisa Stark at a wedding in middle of the series—not everything you want to happen is going to happen. And in some ways, Daenerys going mad is almost as bad as the Red Wedding because, while she always had this in her, the old her was basically killed out of nowhere after so many triumphant moments throughout the years.

Previous Episode: “The Last of the Starks”

Varys betrays his queen, and Daenerys brings her forces to King’s Landing.

To open the episode, Daenerys was basically broken, and she later told Jon she would use fear in place of love (which she was not getting in Westeros like she did in Essos) to take the Iron Throne; but her actions were still shocking. First, the Targaryen Queen had what might be the last awe-inspiring moment on Drogon, as she channeled all her anger to lay waste to the Iron Fleet and then destroyed every Scorpion weapon and the soldiers manning them before striking a major first blow to the Golden Company on the battlefield. All the talk about dragons being unstoppable came true, and the Last War was basically a slaughter, as Cersei’s forces were no match for the combined Stark-Targaryen forces with a dragon in the sky. On-the-ground Lannister soldiers between Daenerys’ army and the Red Keep threw down their weapons, and there was no way Cersei would keep the Throne.

While Tyrion didn’t want his queen to attack King’s Landing and risk thousands of innocent lives at all, he was at least able to get Daenerys to agree to spare the city if the bells ring, which would mean surrender. During the battle, it was a tense few moments, but the bells did finally ring—but this victory just wasn’t enough for Daenerys, providing a stunning twist. All her Targaryen anger came to the forefront as she burnt the city and the people she meant to rule, causing mass destruction. However, it was not just all Targaryen rage, as this was a spur-of-the-moment decision that probably would not have happened if things leading up to the moment went differently.

Two of Dany’s closest friends and advisors (Jorah and Missandei) recently died—perhaps Jorah would still be alive if Cersei helped in the Great War, and Cersei chose to have Missandei executed. She lost two of her children: Viserion beyond the Wall when they were trying to get a wight to prove to Cersei the Army of the Dead was real, and Rhaegal at the hands of Scorpion weapons in the previous episode. And Jon not only continues to turn her down romantically, but Daenerys also feels the former King in the North betrayed her by telling Sansa and Arya the truth about himself, of which word then got to Tyrion and Varys. This was all part of pushing Daenerys to take extreme action with dragon fire.

Similar to the final shot of “The Last of the Starks”, you could see how incensed Dany was when she looked at the Red Keep and contemplated how she wanted to proceed. Emilia Clarke seems like one of the nicest people alive in real life, so she really does an amazing job portraying that anger on screen. Daenerys had always said she would take what is hers with fire and blood, and she did.

“You were the only one who didn’t treat me like a monster.” – Tyrion Lannister to Jaime Lannister

The MVP of “The Bells” could have been Daenerys for finally accomplishing what she’s wanted for years by taking the Iron Throne; but it cost so many lives that Jaime can get the nod for MVP. With the help of Tyrion in an emotional farewell moment between the two Lannister brothers, Jaime was able to escape imprisonment, allowing him to get free, find a way throughout the chaos in King’s Landing, kill Euron, and make it all the way to the Map Room to find Cersei alone and scared. And in their final moment, Jaime was somewhat able to comfort Cersei despite the walls literally collapsing around them.

-The “Previously on Game of Thrones” before the episode had the quote from Cersei about the gods flipping a coin whenever a Targaryen is born (about whether they are mad or not) among other past quotes and remarks concerning Daenerys, and it appears Jon and Dany have landed on opposite sides of that coin heading into the final episode. Jon was truly as loyal as possible to his queen even if he felt he would be a better ruler himself, but you could see how appalled he was at everything that was going on after the Lannisters gave up. Seeing all that destruction might make Jon regret not taking some of the warning signs about Daenerys. Also, the seeds of Dany being capable of this were planted throughout the series, including back in Season 1 when she coldly watched her brother Viserys die with zero emotion.

-Varys jumped from different rulers whenever he felt it was best, so his loyalty wasn’t with any king or queen—he truly wanted to do what he felt was best for the realm. The fact that he stuck his neck out for Jon despite that meaning his own chances of survival not being great shows that Varys really acted for what he believed was the greater good of the people. Maybe things would have gone differently if he wasn’t attempting to have Daenerys overthrown behind her back, but it appears he was right about her. And Melisandre was right about Varys needing to die in Westeros like she did after the Battle of Winterfell.

-Tyrion and Jaime have had a few heartfelt moments throughout the series, but their final embrace was probably the best of them all. Jaime might have been a hateful person like he said in “The Last of the Starks”, but the fact that he was basically the only person to treat Tyrion right while they were growing up shows that he was probably a good person all the way underneath his exterior.

-The sight of Drogon’s shadow flying over King’s Landing might have been familiar, as it seems to be what Bran saw in an earlier vision. Also in that vision, we saw snow falling on the Iron Throne (Daenerys also saw snow on the Iron Throne in her vision in the House of the Undying), which appears to be what we’ll see with snow in King’s Landing judging from the preview for the final episode.

-Tyrion was broken when he first met Daenerys, and the Mother of Dragons made him believe there was something worth living for. The Hand of the Queen is probably broken again after Daenerys made herself look no better than the rest of the previous rulers of Westeros, which makes Dany’s turn—after many positive moments for her throughout the series—all the more heartbreaking.

-Similarly, Daenerys’ Unsullied and Dothraki soldiers were also given meaning in life because of her—particularly Grey Worm. So they won’t see what their queen is doing as being “bad,” as she’s almost like a god-like figure to them.

-Euron was a psychopath, and he probably challenged Jaime because he thought it would be fun to kill a legendary figure—and if not, he’d find out what death is like. The King of the Iron Islands died with a crazy smile on his face, believing that he’d struck fatal blow to the Kingslayer, but we’ll never know if Jaime would’ve succumbed to his wounds if he hadn’t died underground the collapsing Red Keep.

-After Rhaegal was killed, Cersei had good reason to be confident entering the Last War, but she kept hope alive for too long when she probably should’ve listened to Qyburn about the battle being lost. Daenerys destroying the city in front of Cersei’s eyes—meaning it was the end for her—almost made you feel bad for the Lannister queen, despite all the terrible things she’s done throughout the series.

-It was cool seeing Arya and the Hound return to King’s Landing and walk through the city to the Red Keep like a couple of bosses, and their last moment together was another case of Game of Thrones delivering people and relationships that are true to life. Some fans might have wanted Arya to finally kill Cersei, but this was like a real event that just didn’t work out that way. The relationship between the Hound and Arya built throughout their time together made it possible for Sandor to convince the Stark girl that she really doesn’t want to live her life looking for vengeance: “You want to be like me?” At that moment, it got through to Arya, and you could see in her face that she almost looked more like little girl we saw at the beginning of the series before all the horrible things happened to her family and she became an assassin with a hit list.

-One thing that fans have been clamoring for that was able to happen naturally was the Clegane Bowl. After the Mountain crossed paths with the Hound with the sky falling around them, he cared not for protecting Cersei anymore, simply throwing Qyburn aside, killing the person that brought him back to life; and it was kind of funny that Cersei was completely terrified as she scurried past out of the way. The fight between the two monstrous brothers had an apocalyptic backdrop, making it more epic, but the Mountain was unstoppable—and it took a tackle off the castle and into the flames for the Hound to destroy his brother using the weapon that initially and maliciously scarred him for life when they were children.

-Tracking Arya on the ground throughout the melting of the capital gave the viewer a character they really cared about attempting to survive the atrocious scene, and it also gave the perspective of the “good guys” that are left. While many of the Stark-Targaryen forces went into a free-for-all and did whatever they wanted after following Daenerys’ lead, people like Jon and Arya give a moral-compass perspective to the situation. In the aftermath of Daenerys taking the Iron Throne with fire and blood, whatever happens in the series finale might be insane.

-Jaime told Bronn earlier in the series that he hoped to go out in the arms of the woman he loved, and that’s what he did by making it back to Cersei. It wasn’t easy to get back, but Jaime more than made up for leaving Cersei last season, ensuring she wouldn’t die alone—it cost Jaime his life, but he went out the way he wanted to. The acting from everyone that died in “The Bells” was spectacular throughout the series, including Conleth Hill and Rory McCann, both of whom were in Game of Thrones from the start. But Nikolaj Coster-Waldau (Jaime) and Lena Headey (Cersei)—playing two of the five principle characters (Daenerys, Jon, Tyrion being the other three)—in particular were remarkable, and it’ll be weird without them in the series finale.