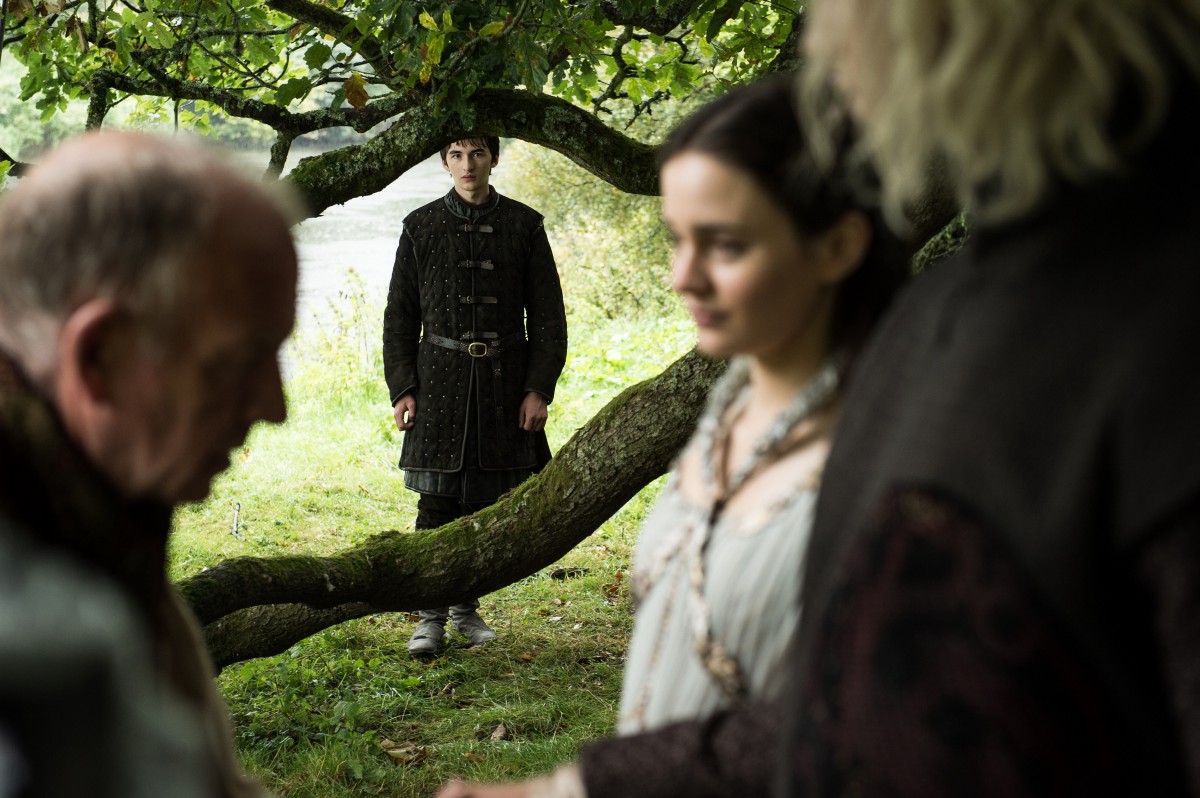 #WinterIsHere Countdown: “The Dragon and the Wolf” (S7E7)


Previous Episode: “Beyond the Wall”

Season finale. Tyrion tries to save Westeros from itself. Sansa questions loyalties.

“The Dragon and the Wolf” is filled with several great moments, including seeing many of the important characters left finally meet in King’s Landing (the first time there for both Jon Snow and Daenerys Targaryen) in what was an extremely dynamic scene, but the top moment has to be toward the end of the episode when Bran Stark puts it together realizes who Jon really is in one of the best moments of the entire series. Normally, Game of Thrones doesn’t cut between scenes with a voice overlay, but Bran talking it through while three different events were shown (Jon with Daenerys, Rhaegar Targaryen marrying Lyanna Stark, and Lyanna Stark telling Ned Stark her child’s name is Aegon Targaryen) is extremely powerful and works very well considering Jon being a Targaryen and potential rightful heir is something we already knew. When Bran says, “he’s never been a bastard…he’s the heir to the Iron Throne”, it just hits you. Jon Snow, who has accomplished so much despite being known as a bastard, actually being a Stark-Targaryen that is heir to the Iron Throne sets up an interesting dynamic between he and Daenerys heading into Game of Thrones’ final season.

“The lone wolf dies, but the pack survives.” – Sansa Stark

The dragonpit meeting is the first time the five principal characters of Game of Thrones (Jon Snow, Daenerys Targaryen, Tyrion Lannister, Jaime Lannister, and Cersei Lannister) have appeared in a scene together.

For the final episode of the #WinterIsHere Countdown, we have a tie for the MVP. There were simply too many things that happened in “The Dragon and the Wolf”, and they were all worthy of both best moment and MVP.

First, Jaime Lannister continued what is perhaps the best character arc of any television character in history. At this point, he’s realized his sister, who he loves, is not the greatest person in the world, but he has always remained by her side. Faced with the prospects of fighting an existential threat in the Army of the Dead, Jaime could not stay with Cersei any longer after she revealed she was going to cross Daenerys Targaryen. After Cersei indirectly used The Mountain to threaten Jaime’s life, he called her bluff: “I don’t believe you.” While the former Lord Commander of the Kingsguard is not close to the legendary knight he was when he had two hands, he should be a big asset in the fight against the dead. Then, when Jaime began to ride north, snow began to fall in an awe-inspiring sight: for the first time in Game of Thrones, it snowed in the capital, as winter officially hit King’s Landing.

Throughout Season 7, Sansa Stark and Arya Stark were not getting along, and it set up tension that appeared to be coming to a head in the season finale. The writing and acting did a great job of making it appear like one of them might actually die, and it looked like Arya might be tragically sentenced to death from her sister—until, the Lady of Winterfell came with the ultimate twist, asking Lord Baelish how he answered to the chargers of murder and treason. The look on Littlefinger’s face said it all, and it was probably satisfying for most viewers to see him beg for his life. Littlefinger might have set in motion the events in Game of Thrones more than anyone, so him finally meeting justice after his actions caused a chain of events that led to the deaths of Ned Stark, Catelyn Stark, Robb Stark, and others was a win for the good guys.

And finally, the Wall has stood for 8,000 years, but after the events in “Beyond the Wall”, the Night King now had the only weapon capable of taking down the legendary structure: a dragon. Riding on an ice dragon Viserion, the Night King had Daenerys’ former dragon shoot out blue fire to take down the wall near Eastwatch, where Tormund Giantsbane and Beric Dondarrion were stationed. The Army of the Dead has a clear path into the realms of men, which sets up a gloomy outlook for our heroes in Westeros.