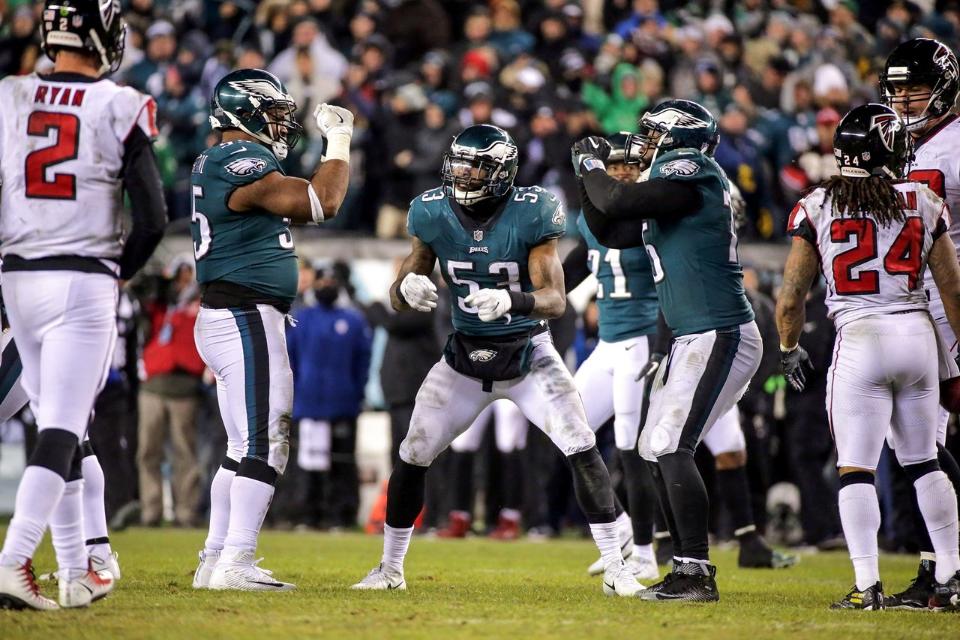 
The NFL playoff field is officially cut in half, and it will be cut in half again after this weekend, when two teams will be left standing with the opportunity to play in Super Bowl LII. Anything can happen at this point, but this is where I see teams standing entering the Conference Championship Games. For thoughts on teams that were eliminated from the playoffs before last weekend, check the Divisional Round power rankings.

The first game after what I believe is a fabricated ESPN story about a rift between Tom Brady, Bill Belichick, and Robert Kraft went about how you would expect for the Patriots. Brady looked like his usual postseason self, playing with extreme calmness and confidence while throwing pinpoint passes all over the field. He’ll have to face two of the top five or six defenses in the NFL—and potentially the top two if he faces Minnesota—if New England gets to the Super Bowl, but New England is still the favorite. On defense, they sacked Marcus Mariota eight times and appear to be heating up; and remember, they were already playing very good defense after the slow start to open the year (they were fifth in points allowed).

After a third quarter interception thrown by Case Keenum, the momentum appeared to really shift in favor of the Saints in the Divisional Round. However, Keenum, didn’t get nervous—even with Sam Bradford ready to step in—and instead threw dimes to his receivers including on the 61-yard game-winner to Stefon Diggs with no time remaining. Endings don’t get much crazier than that, and the Vikings need to ride the momentum to Philadelphia without having an emotional letdown after the extreme high of victory. Jacksonville gets a lot of the publicity, but I believe Minnesota clearly has the league’s best defense; and they have a great chance to become the first team to play a Super Bowl in their home stadium if they avoid mistakes this Sunday.

Atlanta was probably the best matchup Philadelphia could have gotten in the Divisional Round, and the game played out as expected: a low-scoring affair that came down to the end. The NFC Championship Game against the Vikings should be another low-scoring contest, which could bode well for the home team. The Eagles don’t have Carson Wentz, but they are still a really good squad that has a quarterback (Nick Foles) that’s getting the job done, and they are the perfect team to play the underdog card. Now Sylvester Stallone just needs to show up and pump up the crowd at Lincoln Financial Field before the game.

It did not go quite the same way as the five-interception performance back in Week 5, but the Jaguars still bullied the Steelers to start Sunday’s Divisional Round win, and the offense made plays in the fourth quarter to hold on and win. Ben Roethlisberger did throw for 469 yards and five touchdowns, though, and it would not be surprising to see Tom Brady and the Patriots light up the Jags. New England is likely to have a great defensive gameplan against Blake Bortles and Jacksonville, and this will clearly be the biggest test of the season for the AFC’s breakout team that’s just a game away from the Super Bowl.

The Falcons were my selection to get to the NFC Championship, but at Philadelphia was obviously going to be a difficult matchup for them. They came up just short with a prime opportunity to get the ball in the end zone, which must have been demoralizing for the team. However, all things considered, the Falcons defied most expectations this season. Many thought the Falcons were a fluke as NFC champions for some odd reason, but they made it back to the postseason, avoiding a Super Bowl hangover; and it was the first year with new offensive coordinator Steve Sarkisian. There’s reason to be very optimistic about Atlanta for next season and beyond.

I was never high on the Steelers coming into the season because I never thought they would get by New England in the AFC. Well now they won’t even have the opportunity to get a crack at the Patriots, as they were seemingly so worried about knocking off the defending champs that they fell behind 21-0 to the Jaguars and could never come back from the deficit. The good news is Ben Roethlisberger appears poised to return to the team next season, so Pittsburgh should be among the AFC’s elite again. However, there could be changes in the offense at offensive coordinator if Todd Haley doesn’t get a new contract.

While he had a chance to make the play and perhaps help New Orleans hold on against Minnesota, rookie safety Marcus Williams handled the situation with a lot of class. He certainly gained a fan in me, and it’s good to see people—including Saints fans and non-Saints fans—out there giving support. Everyone makes mistakes, and it’s good to see Williams respond with dignity. Many always want to be negative because it makes them feel better about themselves or whatever, but no one wants to talk about Williams making the key interception that got New Orleans back in the game in the first place. I have a feeling we’ll see a lot of big plays throughout the career of the athletic safety.

Former Titans head coach Mike Mularkey had quite the couple of weeks, as the was apparently on and off the hot seat before eventually getting let go yesterday morning. While I was not a fan of the offense, I don’t like how the situation worked out with the team announcing just last week that Mularkey would be back in 2018. Nevertheless, GM Jon Robinson will now have an opportunity to select a head coach for the first time, and this job should be sought-after considering they have a young franchise quarterback. Personally, I would love to see Chip Kelly reunite with Marcus Mariota, and if I was the Titans I would do all I can to see if I could get him away from UCLA; but they ultimately might have to go in a different direction.