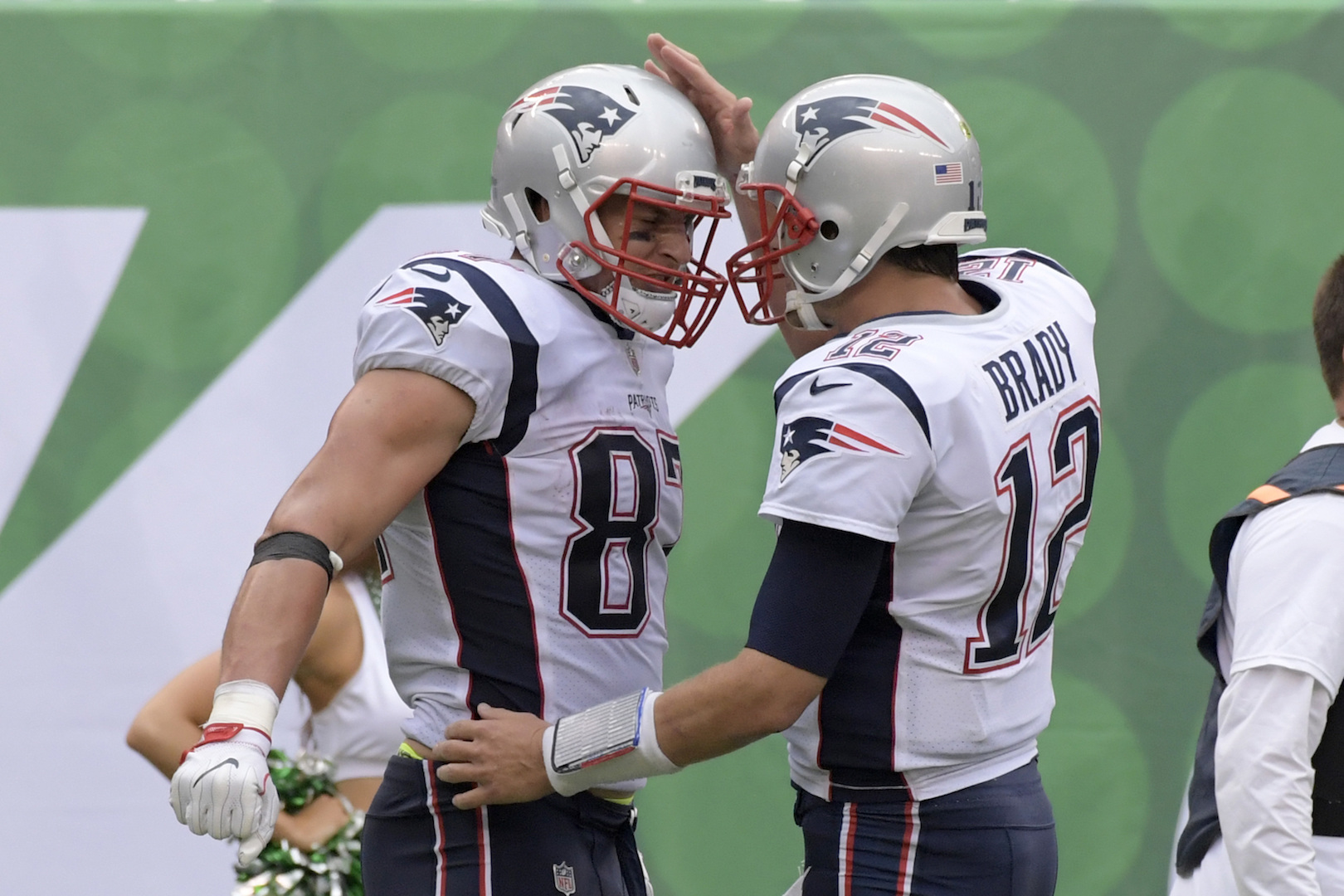 
NFL football is back. After seven months without an NFL game that counts in the record book, the season is finally here. The NFL is an awesome league because every single week matters and almost anything can happen—just look at what Nick Foles and the Eagles did en route to their first Super Bowl victory last season.

I believe the quarterback position (the most important position in sports) and the league in general are as deep as ever, and almost nothing that happens would surprise me this year. The NFC is obviously stacked, and the AFC is a lot stronger than people give it credit for. That said, these are my playoff and award predictions for the 2018 NFL season.

All four teams should have a legitimate shot to win the NFC East. Every year is different, so I typically don’t care for these types of anecdotes, but it might be worth noting that no team has repeated as NFC East champion since the Eagles’ run of four straight division titles from 2001-2004. There are concerns with how Philadelphia will do in their transition from underdogs to top dogs, and Michael Bennett’s presence could be disruptive; but the team culture that’s been established should help the Eagles repeat as division champs. I think the NFC East might come down to the Week 17 matchup between Philadelphia and Washington, though.

The Vikings and Packers have alternated NFC North titles the last four seasons, but the Lions and Bears appear to be on the rise. However, I think it’ll be between Minnesota and Green Bay in the end, with the Packers again becoming the kings in the north. I love the Vikings defense, but the offensive line is a major concern, and I’m very intrigued to see whether Kirk Cousins is actually a quarterback upgrade over the situation they had the last couple of seasons.

This is the toughest division in football, and it was the only division in the NFL with three playoff teams from a season ago. Atlanta, New Orleans, and Carolina are all potential double-digit-win teams again in 2018, but I’m going with the Falcons to win the division. With Steve Sarkisian entering his second season as the team’s offensive coordinator, the Falcons should be closer to their 2016 form offensively; and there’s talent all over the field on both sides of the ball. I expect the Saints and Panthers to be very competitive and in the mix all season, but the Bucs are one of the two NFL teams that would surprise me if they make the postseason this season.

The Rams are going all-in for a Super Bowl, and they have the talent and coaching to be a dominant team in 2018. There is some concern with so many personalities quickly meshing together, so the upside also comes with considerable downside if the team doesn’t come together. The Seahawks should not be counted out with Rusell Wilson at quarterback, and Niners superstar Jimmy Garoppolo hasn’t lost a game as a starter. But the team to keep an eye on is the Cardinals. Arizona’s new head coach Steve Wilks could help the defense get to the top of the league, and the offense is in good hands with offensive coordinator and former head coach Mike McCoy. The offensive line must protect him, but watch out for Sam Bradford if he can stay healthy. I think the Rams will win the division, though.

I like what the Bills, Dolphins, and Jets are doing. The Bills have a really good defense and a promising young rookie quarterback in Josh Allen, but the offensive line probably isn’t where it needs to be, so I like the decision to play Nathan Peterman. The Dolphins are undergoing a culture change and should be able to compete each week. And the Jets have a bright future with Sam Darnold leading the way. But New England runs the AFC East, and they should get a first-round bye if not homefield advantage throughout the postseason.

One of this year’s trendy big-jump picks is the Browns, but—despite all their talent—I just don’t see it happening after watching HBO’s Hard Knocks. The Bengals are a team I think will be in the playoff conversation led by a new Bill Lazor offense that had the full offseason to get installed and a potent front-four on defense. Baltimore is a team I have right on the border of the postseason, but John Harbaugh is known to be on the hot-seat if the team misses out again. I never seem to be high on the Steelers—probably because I never like their chances of getting past the Patriots—but I think they should win the division again—with or without Le’Veon Bell, as John Conner should be able to carry the load if necessary.

There might not be a team that’s flying more under-the-radar entering this season than the Titans, who are extremely talented at nearly every position on both sides of the ball. Marcus Mariota should benefit from a change in offense, and he showed last season that he makes plays when his team is counting on him. With a lot of man coverage expected, the Titans have the corners—Malcolm Butler, Adoree’ Jackson, and Logan Ryan—to shut down opposing wide receivers; and the front seven should be one of the league’s best. The Texans have tremendous upside with Deshaun Watson, J.J. Watt, and Whitney Mercilus all returning from injury. The Colts might have the biggest difference-maker returning from injury in Andrew Luck, who might be able to carry a young roster to contention. I think the Jaguars will certainly be in the playoff hunt, but they might take a step back after their breakout 2017.

The most intriguing division in the NFL entering 2018 might be the AFC West. The Chargers probably have as many star players on both offense and defense as any team in the league, and they have a future Hall of Fame quarterback leading them in Phillip Rivers—but will the seemingly-always unlucky franchise be able to capitalize on the talent with a division title? Kansas City’s offense is going to be a blast to watch with Patrick Mahomes, Kareem Hunt, Travis Kelce, Sammy Watkins, Tyreek Hill, and Chris Conley, among others, and the defense might be better than expected if Eric Berry is healthy. Overall, I am not high on Denver, but I do like offensive coordinator Bill Musgrave, and the team has a couple of bookend rushers (Von Miller and rookie Bradley Chubb) that can wreck games. And I previously went in to why so many “experts” are wrong about Jon Gruden. Eventually Gruden’s Raiders will be a big-time threat in the AFC, and I believe they will make the postseason in his first year back on the sidelines.

Again, there are so many great teams in the NFL, so there isn’t much that would be surprising. The toughest teams to leave out of my playoff predictions (I know there are a lot), in order, are: Vikings, Texans, Redskins, Panthers, Chiefs, 49ers, Bears, Bengals. I love defense, so it was especially tough to leave Minnesota out of the playoffs—but it’s possible they suffer a hangover from the NFC Championship Game last season (and it would’ve been five of the six NFC playoff teams from last season, which is unlikely to happen).

Tom Brady somehow only has three NFL MVP awards (2007, 2010, 2017), but he remains atop the game as the league’s best player at 41-years-old. If he’s healthy for the entire season, there’s little question Brady will be among the top candidates for MVP, as he’s shown no signs of slowing down. Brady should be near the top of the league in passing yards, passing touchdowns, and completion percentage—with only a few interceptions—on a team that might be the best in the NFL.

Here are my other top candidates for MVP for the 2018 season:

The Cardinals are going to give David Johnson a heavy workload as they look to get back to the postseason under a new coaching staff. Johnson’s goal of 1,500 rushing yards and 1,000 receiving yards is certainly a possibility, and it’d make him a near-lock for Offensive Player of the Year—if not league MVP.

Joey Bosa already has 23.0 sacks through two NFL seasons, but that’s probably his floor, and there’s probably room for him to grow into a 20-sack player. If the Chargers are one of the NFL’s top teams this season, Bosa is likely to be a big part of it. [UPDATE: With Joey Bosa now out for Week 1 and potentially longer, I am changing my pick to J.J. Watt.]

There are so many great running backs in the NFL, but Saquon Barkley has a chance to immediately step into the league as the premier player at the position. The Giants are going to give him the ball a ton after drafting him second overall, and he’s the heavy favorite for Offensive Rookie of the Year.

The long summer holdout as the rookie contract was being worked out is not ideal, but Roquan Smith should be ready to go when Chicago’s season opens on Sunday night versus Green Bay. Smith was arguably up there with Saquon Barkley as the best overall player in the draft, and the Bears should have one of the best defenses in the NFL in 2018.

NFL fans should hope Andrew Luck is back to his usual self and can take the field for a full 16 games this season. If he does, it’s almost a lock that he’ll win Comeback Player of the Year, given his position and the fact that he hadn’t been on the field since 2016.

If the Raiders and Cardinals both make the postseason like I am predicting, Coach of the Year might be a two-horse race between Jon Gruden and Steve Wilks. Despite the media’s apparent disdain for Gruden, he has the advantage of being a bigger name that’s calling plays on offense—which people get more excited about. I am anxious to see what the Raiders look like, particularly on offense, this season.