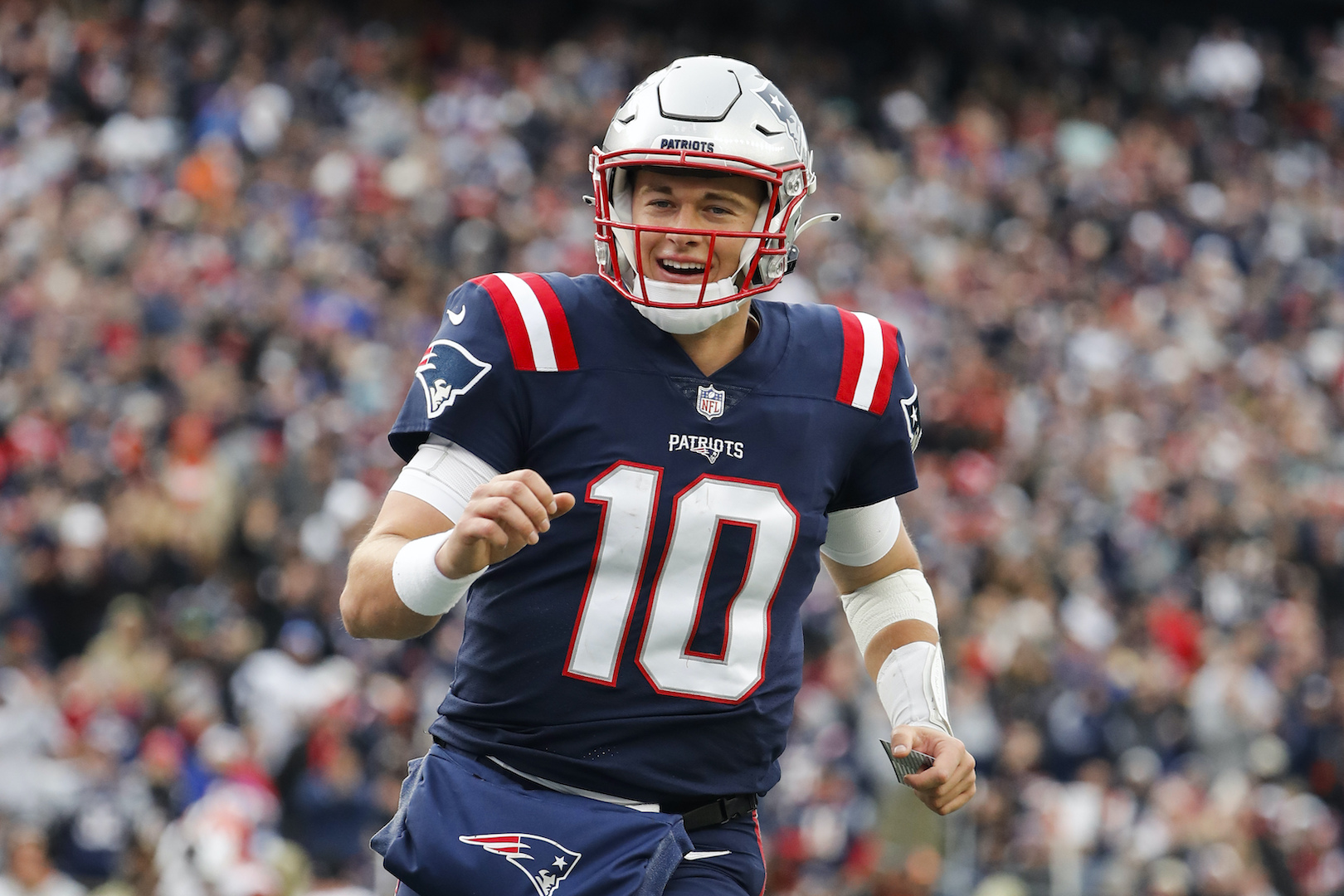 Tom Brady has already gotten revenge for Deflategate a couple of times since it happened, but I’m sure he’ll still have extra motivation to take on the Colts this week, and the offense performed much better on Monday night despite stalling some in the red zone. Indianapolis has a ton of confidence coming off a dominant win over Buffalo, though, and we might not be able to say the Bucs have returned to form on defense based on a strong showing versus the struggling Giants—the Colts have a lot of weapons for Carson Wentz to hit, and the offensive line will open holes for superstar runner Jonathan Taylor. Plus, the latest episode of Hard Knocks has me actually believing in Indy as a contender in the wide-open AFC, and all three phases have been excellent during the current stretch of five wins in six weeks. However, TB12 having Rob Gronkowski elevates the entire offense, and I think we can see a close-to-flawless outing on the road with Tampa Bay turning it on for the final several weeks.

Jets-Texans isn’t a game people outside of New York or Houston will be tuning into for a stacked early slate this weekend, but it should actually be an entertaining matchup with Zach Wilson returning to the lineup against a team that’s gone 2-2 with Tyrod Taylor under center. Unfortunately, Wilson won’t have Michael Carter (ankle) and Corey Davis (groin) isn’t going to be 100%, but second-round pick Elijah Moore is turning into a star, and perhaps Denzel Mims will be able to take advantage of another expanded opportunity after struggling some back in Week 9—in my opinion, it’s silly to bench a talented player for making a couple of mistakes instead of allowing him to redeem himself (Mims hasn’t played a snap since). In the backfield, not having Carter will push Tevin Coleman back into the starting role, and his burst is something that New York should get a boost from to create chunk plays that complement the passing game. After a few weeks seeing the field from another perspective, I like Wilson to show why the Jets made him the No. 2 overall pick in the 2021 NFL Draft.

The Giants likely circled this game on the schedule when it was released earlier this year, but while I believe it was disgraceful how the Eagles handled the 2020 season finale, New York hasn’t really shown they will have the ability to get revenge based on a) how they’ve played, and b) how Philadelphia has played. Perhaps the firing of Jason Garrett as offensive coordinator—who was extremely classy following the decision—will lead to the Giants being more creative by playing through Kadarius Toney, but last week’s game plan included the rookie wideout uncorking a deep ball and had a trick-play touchdown for left tackle Andrew Thomas; maybe as Jimmy Johnson pointed out yesterday when criticizing the scapegoating of Garrett, there are bigger issues at play in New York. One of those issues is a lack of a consistent pass rush, and Jalen Hurts has proven he can beat opponents with his arm when given a clean pocket during Philly’s shift in offensive philosophy. The more confident team should be able to get to 6-6 and make things very interesting in the NFC East.

Defense was surprisingly the problem for Carolina in last week’s loss to Washington, but the game would have likely turned out differently if they recovered more than one of their three forced fumbles, and facing a sub-par offensive line for Miami can allow Haason Reddick (10.5 sacks) and Brian Burns (7.0 sacks) to takeover. That combined with Cam Newton’s efficient play as both as a passer and runner is reason to believe the Panthers can get back to .500 ahead of a Week 13 bye, and the offense playing through Christian McCaffrey will allow them to avoid challenging Xavien Howard or Byron Jones on the outside. For the Dolphins, chipping away with a balanced offense helped them go eight-for-14 on third down last week, but they need to make sure to keep Mike Gesicki involved the entire game after he had just one target in the second half after seven in the first half alone (if you include a couple of pass penalties that negated the play). Overall, the matchup appears to favor Carolina on both sides of the ball.

First place in the conference is on the line for Titans-Patriots, and the teams are trending in opposite directions with Tennessee having injuries catch up to them and New England getting the entire team to gel during a five-game winning streak. The status of A.J. Brown (chest) is huge, as it’s difficult to see Ryan Tannehill being able to move the ball if he’s out, especially because the Titans haven’t been great on the offensive line since losing Derrick Henry (foot). The best chance for the Titans—currently 6.5-point underdogs—to pull off the upset is by having Jeffery Simmons and the defensive front get to Mac Jones, but the NFL Offensive Rookie of the Year favorite has displayed masterful pocket movement and accuracy as the triggerman of a balanced attack. Something tells me we will get a January rematch when Tennessee is at full strength, but right now, it’s tough to go against New England.

Although it wasn’t easy sledding on the ground last week versus Las Vegas, the Bengals wisely stuck to Joe Mixon and the running game coming off the bye—feeding him a season-high 30 carries for 123 yards and two touchdowns. Joe Burrow has one of the best receiving trios in football, but Cincinnati is at their best when playing through Mixon, who is running on a seven-game touchdown streak dating back to the final week of September (with ten scores over that span). On the Pittsburgh offense, Najee Harris was peppered by Ben Roethlisberger in the first matchup between these AFC North foes (14 receptions on 19 targets), but the hope is Diontae Johnson being on the field for the rematch will lead to a much better showing for them, and Big Ben notably hasn’t thrown an interception since Week 4 and looks better and better by the week. Defensive reinforcements for the Steelers might be enough to get them back on track after their four-game losing streak was snapped last Sunday night, and I have more faith in Mike Tomlin/Roethlisberger than I do Zac Taylor/Burrow.

"There's something wrong with you if you don't like mac and cheese." 😂 pic.twitter.com/IAM8EoSSri

The Chargers are one of the NFL’s toughest offenses to defend when Justin Herbert is on point, and Sunday night’s shootout victory saw all three of their featured weapons—Austin Ekeler, Mike Williams, and Keenan Allen—go off against a depleted Pittsburgh defense. Denver having an extra week to prepare for Los Angeles might not be enough to slow the group down, but getting Bradley Chubb (ankle) back would certainly improve their chances; if not, the Chargers should dial up more deep shots to Williams to build on last week’s game-winning, 53-yard score. On defense, I’ve been very surprised that LA has underperformed at the level they have considering their impact talents at basically every position group, and the unit needs to flip a switch at some point if they want to not only earn a playoff spot, but also make a deep run. Even though Teddy Bridgewater also a bunch of firepower at his disposal, the Chargers get the edge on the road with the advantage under center.

A rematch from last postseason, Rams-Packers is a key NFC clash in terms of playoff positioning, and with fans back in stadiums, homefield advantage will mean a lot more than it did last year. Of course, the advantage will also be there this week with Lambeau Field rocking to make things difficult on Matthew Stafford, and Los Angeles frankly won’t have a shot to beat Aaron Rodgers if their quarterback plays like he has in the first two games of November (both losses with two interceptions and 16 or fewer points scored). Rather than trying to get Odell Beckham Jr. the ball or dropping back 40+ times, it might be a good idea for Sean McVay to play through Darrell Henderson and Sony Michel similar to what the Rams did with Cam Akers in 2020, and I’m guessing the Packers—despite struggles versus Minnesota—will play much better on the backend and force Stafford to be more conservative than he’d like to be. On the other side of the ball, Davante Adams has proven he can get the better of Jalen Ramsey, and a fractured toe didn’t stop Rodgers from lighting it up last week. At home, the better team and quarterback should win.

Kirk Cousins has played terrific football this season with 21 passing touchdowns and two interceptions (plus just one lost fumble)—putting the Vikings right into playoff contention following a 1-3 start. In general, the losses for Minnesota have been one-possession defeats to the Bengals, Cardinals, Browns, Cowboys, and Ravens, so beating the Chargers and Packers in back-to-back weeks might be a sign they have found the “killer instinct” that Mike Zimmer wanted them to find. However, the 49ers are also on the rise with back-to-back blowout victories, and Jimmy Garoppolo has played well enough that Kyle Shanahan sounds open to him being their starter in 2022. Elijah Mitchell (finger) is still on the mend, but his absence at least led to Trey Sermon having a solid role for the first time since early October, and the Ohio State product staying involved alongside his rookie teammate and veteran Jeff Wilson can make it a more well-rounded backfield. The running game, Deebo Samuel, George Kittle, and the emergent Brandon Aiyuk can give the Vikings problems; I have San Francisco winning a close one.

A calf injury derailed his season for a bit, but Nick Chubb is arguably having the best year of his career—rushing for 106.4 yards per game and averaging 6.0 yards per carry—and the Browns need to feature him at a higher level to have more consistent success. This week, the Ravens could be without both Calais Campbell (concussion) and Brandon Williams (shoulder) on the defensive line, which would increase the likelihood of Chubb going wild, which he’s done against Baltimore for one of their matchups in each of the past two years; I would just hope the return of Kareem Hunt (calf) doesn’t inexplicably lead to Cleveland’s best player only being given around 15 touches when it should be in the 20-25 range every single week. The Browns will also get Jack Conklin (elbow) back at right tackle, and if Baker Mayfield doesn’t make a costly mistake, I like the offense to move the ball consistently. What will determine the outcome is the effectiveness of Cleveland’s defense stopping Lamar Jackson—and they should be focused to make up for last season when Baltimore put up point totals of 38 and 47 in a season sweep. Still, assuming Chubb is fed, the Browns have a great shot to win.

I’m not ready to count out Seattle with a bunch of very winnable games left on the schedule, but they need to get going immediately by having some primetime magic return on Monday night. Russell Wilson, D.K. Metcalf, and Tyler Lockett are all too talented for the Seahawks to continue struggling, so the matchup versus a Washington defense allowing a league-worst 2.4 passing touchdowns per game can potentially get them to snap out of the struggles. Losing Chris Carson (neck) for the season definitely hurts, but I would like to see the Seahawks give DeeJay Dallas an expanded role due to his versatility and physicality, and Rashaad Penny (hamstring) might not be able to play after getting injured on his first touch last week. For Washington, Taylor Heinicke has beaten two very good defenses—and former NFL MVP quarterbacks—over the past two games, and Panthers cornerback Donte Jackson (a former teammate) had some high praise for him following Week 11’s battle. That said, I’m leaning towards Seattle with perhaps one last shot to save their season.