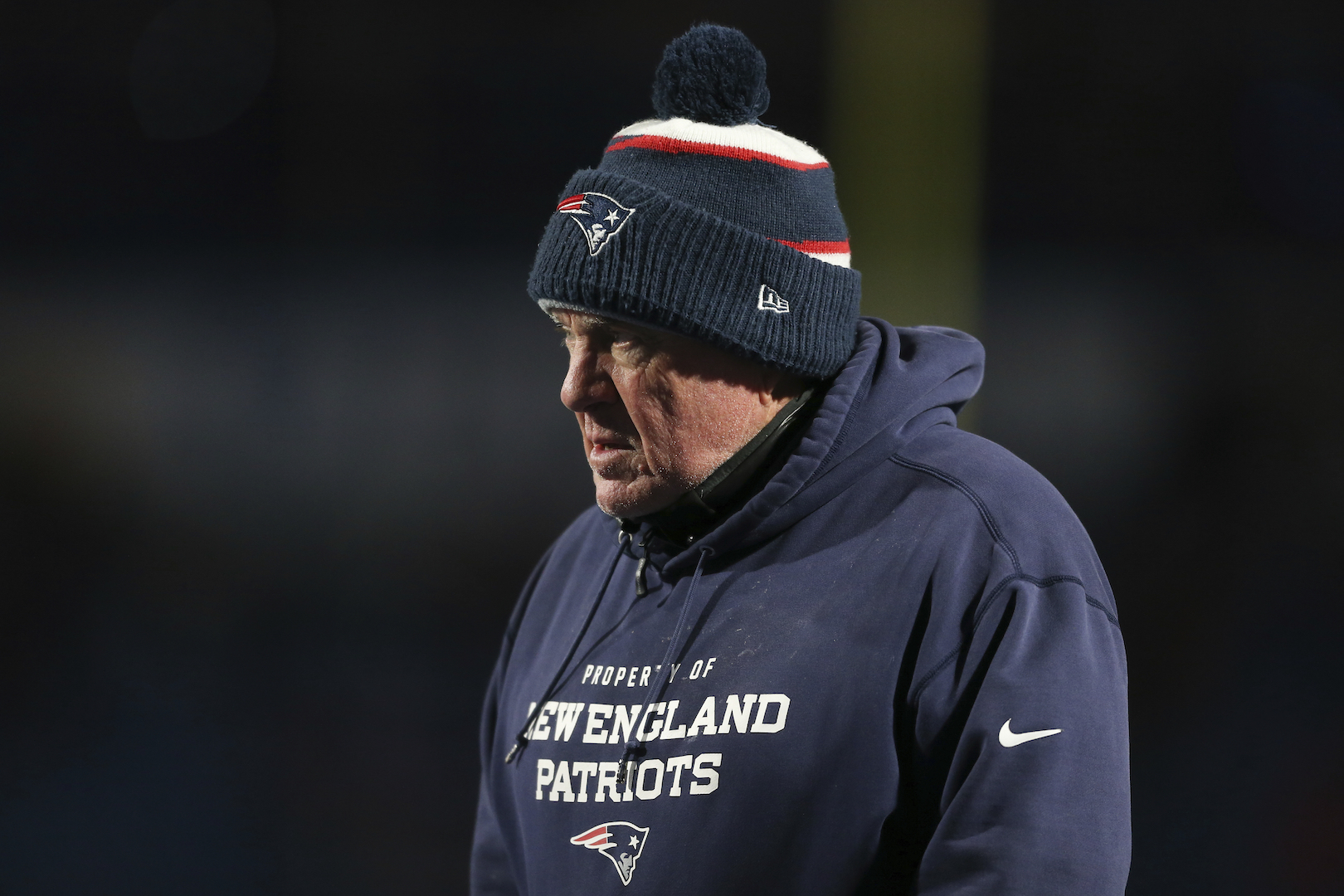 The Cardinals are 7-0 on the road this season and have won each game by double digits. It’s simply an indicator of something I’ve been saying: Arizona is a physical team. The talented defense has been very good in Year 3 under defensive coordinator Vance Joseph.

Aside from the surprising pick-six thrown on a screen pass at the end of the first half, Tom Brady was basically flawless in Tampa Bay’s win over Atlanta. And the Tampa Bay defense continues to find its groove, getting relentless pressure on Matt Ryan last week.

Aaron Rodgers had the bye week to allow his fractured toe to heal up a little more, and Green Bay might get star players David Bakhtiari, Za’Darius Smith, and Jaire Alexander back soon.

In a year that’s been filled with insane parity, I think the top four teams might have separated themselves just a bit after Thanksgiving. The Patriots threw the ball just three times in the weather-impacted Monday night win against the Bills, and arguably the league’s top defense helped allow them to get away with that gameplan. In case you forgot after last season, Bill Belichick is the greatest.

The Titans had the bye week, but Mike Vrabel was active on Twitter during the Sunday night Broncos-Chiefs matchup:

Not that the Travis Kelce play should have been changed, because that was extremely close in my opinion. But it feels like the NFL and its officiating (and its official scoring) have almost been making things up on the fly.

The defense remains the driving force behind the Chiefs’ midseason bounce back, but we’ll see if the offense can again have a huge game when facing the Raiders in Week 14. Patrick Mahomes threw five touchdowns versus Vegas in the first matchup.

The Bills were fortunate to have a ball barely glance off N’Keal Harry’s facemask on a punt return, which led to a short field and their only touchdown on Monday night. The good news after that tough loss to the Pats is that they seem to have a chip on their shoulder heading into the rematch in New England this month.

Ezekiel Elliott still couldn’t get much going last Thursday night, but the Cowboys were facing an elite Saints run defense. Dallas can separate and build a comfortable NFC East lead when they play Washington this Sunday.

The sloppiness the Ravens have played with for much of this season came back to hurt them in the one-point loss to the Steelers—and not being on point probably isn’t going to cut it in the postseason.

The bye week probably came at a good time for the Colts, as Jonathan Taylor had time to rest up for the stretch run during which he should get a massive workload for a team looking to get into the postseason.

You probably shouldn’t buy too much into the Rams being back on track after beating the Jaguars, but it was a great sign that Sean McVay went with heavy usage of Sony Michel (24 carries, 121 yards, one touchdown) to help keep the Rams offense in favorable situations. Michel sets a tone for Los Angeles and churns forward for positive yardage on his carries.

The Chargers forced turnovers and flashed their upside on both sides of the ball in the win against the Bengals in Week 13. Justin Herbert won AFC Offensive Player of the Week after putting up over 300 yards and three touchdowns on a strong Bengals defense.

A slow start and a poor finish made it difficult for Cincinnati to make it a game against LA in the end. Joe Burrow’s pinky injury is something to watch moving forward.

Again, it is not wise to count out a Mike Tomlin coached team. The connection between Ben Roethlisberger and Diontae Johnson was key in the upset win over the Ravens, and the healthier Pittsburgh defense led by T.J. Watt stepped up to make big plays on Lamar Jackson and Baltimore.

It was probably a matter of time before the Seahawks snapped out of their skid, and it didn’t help that Deebo Samuel (groin) was out of the lineup for the Niners on offense. Hopefully Elijah Mitchell (concussion protocol) is cleared for this Sunday versus the Bengals; San Francisco must get the run game going again after they were contained last week.

I don’t like nor do I understand the NFL’s scheduling with the Browns playing the Ravens in two consecutive games (sandwiching their bye week). Kevin Stefanski will probably emphasize more of a run-heavy approach with Nick Chubb this time around.

Washington sadly lost Logan Thomas for the season due to a knee injury suffered on an arguable dirty hit by Raiders defensive end Yannick Ngakoue, but Ron Rivera’s team has dealt with injuries (Chase Young being the standout) and pushed through to get to .500 and squarely in the mix for both the division and a wild-card spot in the NFC. Quarterback Taylor Heinicke has been clutch on third-down situations to keep drives moving for Washington.

Perhaps this is still too low for the Dolphins, who are on a five-game winning streak as they enter the bye week. Tua Tagovailoa still does not get nearly enough credit for the way he’s played (behind a subpar offensive line).

I felt the Vikings were in serious trouble when Patrick Peterson, Anthony Barr, and Eric Kendricks were all out for Week 13 against the Lions, and it was a tough loss to fall to 5-7 while being the first team to lose to the Lions. Minnesota has a quick turnaround when they host Pittsburgh on Thursday night.

Gardner Minshew efficiently ran the offense for the Eagles, but we should slow down just a bit on creating a quarterback controversy—and I like Minshew as a capable starter in the league. Anyone that actually watched the game instead of just looking at the stats or social media hype saw that Minshew had a lot of easy throws against a poor Jets defense. For the Eagles defense, they had a very slow start in the Week 13 victory, but they picked it up later in the game.

As someone that picked up and played Foster Moreau in my fantasy league last week, I know how close the Raiders were to a couple of big plays to him (including a touchdown) that might have changed the outcome of their tight loss to Washington. This week is obviously critical for Vegas as they look to avenge their earlier loss to KC.

Teddy Bridgewater did not play well at all on Sunday night, and I continue to question why on earth Denver-Kansas City was flexed to that slot—I know Patrick Mahomes is a ratings draw, but come on. Anyway, rookie running back Javonte Williams had a superb start for the Broncos, showing in primetime that it takes a lot to bring him down.

It must have felt amazing to end the three-game losing streak while putting up 30 points against the Niners, and Seattle should not be counted out despite how ugly it’s looked at times. Unfortunately, starting safety Jamal Adams, who the Seahawks paid a huge price for both in trade compensation and a contract extension, is done for the year with a torn labrum.

The Panthers were on their bye but delivered a stunner with the firing of offensive coordinator Joe Brady. Matt Rhule has made it clear that he wants to run the ball more, and it’ll be interesting to see how Carolina looks when they return to action versus the Falcons this weekend.

Taysom Hill injured his finger in last Thursday’s loss to Dallas, but he is expected to be good to go moving forward despite almost certainly being at less than 100%. The Saints will get a huge boost if Alvin Kamara (knee) is able to return to the lineup after missing a few games, as expected.

The pass protection was again a noticeable flaw for the Falcons in the loss to the Bucs, and it makes it nearly impossible for Matt Ryan to move the ball when he’s under constant pressure. It’s not a “must-win”, but this Sunday against the Panthers feels like an elimination game of sorts in the NFC.

Daniel Jones is again going to miss this week due to a neck injury, and it sounds like he will be done for the season. And with Mike Glennon in concussion protocol, Jake Fromm might be set to start at quarterback for the Giants despite just joining the team last week. I was extremely high on Fromm coming out of Georgia, and it would be nice to see him get an opportunity, even one that’ll be extremely challenging.

The turnovers made it tough for the Bears to compete against the Cardinals, and the gauntlet will continue this week when Chicago battles a rested Green Bay squad.

I already hit on the Eagles defense struggling early against the Jets, and it was pretty disgusting to watch the defensive play on both sides early in that Week 13 matchup. There are pieces up front for the Jets, and hopefully they can build something over the final five games.

Both James Robinson and Carlos Hyde fumbled against the Rams last week, and Robinson was not happy with getting benched for the turnover. We’ll see how Urban Meyer and company respond after that and after getting blown out by Los Angeles.

It was cool to see the Lions finally get on the board with a win this season to avoid another 0-16 (and one), and the massive celebration on the game-winning touchdown pass from Jared Goff to Amon-Ra St. Brown was completely understandable. Detroit is now looking to build on this, and I’d like to see them avoid a letdown after the high of victory.

The Texans cut linebacker Zach Cunningham as they continue to build the foundation for the team moving forward. Houston has a lot of work to do.