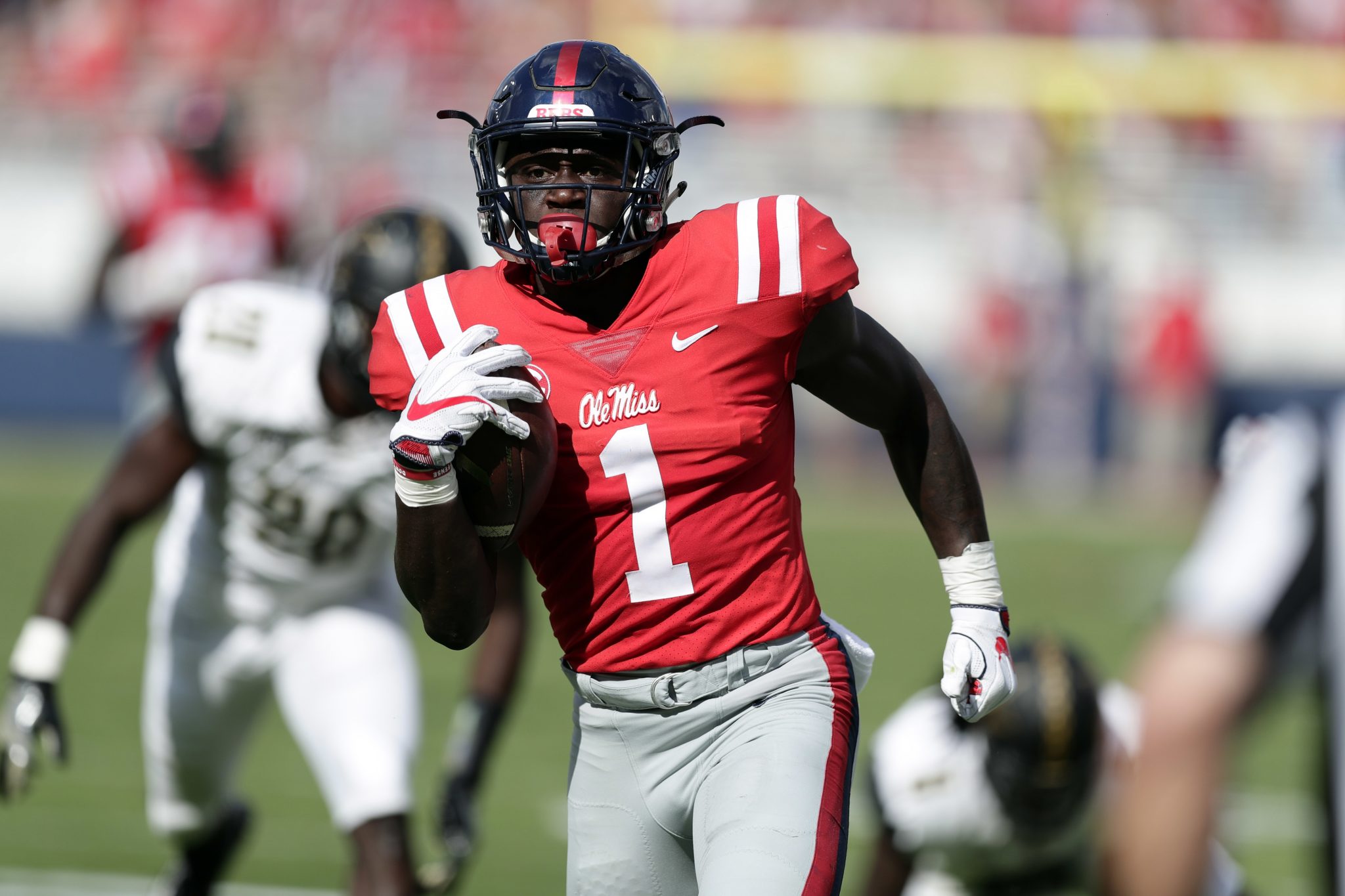 
Last fall, I did a preliminary ranking of the top prospects for the 2018 NFL Draft, which you can read here. Of course, things change a bunch throughout the course of a full college football season and the pre-draft process, but here are my early prospect rankings for the 2019 NFL Draft.

From the moment he stepped on campus, Dexter Lawrence was considered a possible No. 1 pick, and he has lived up to expectations with excellent play in the middle of Clemson’s elite defensive front. Listed at six-foot-four, 340 pounds, Lawrence has unbelievable feet for his size, and he can control blockers, track down running backs, and get after the passer. I think the Browns might have taken him in the top-five last week if he were in the draft.

Like Lawrence, Nick Bosa is another prospect that appears to be a lock for the top five in the 2019 NFL Draft. The younger brother of former No. 3 pick Joey Bosa has a similar all-around, havoc-wrecking game, and some people even believe he’s even better than the 2016 NFL Defensive Rookie of the Year.

This draft class looks to be loaded on the defensive side of the ball, particularly in the trenches, and Dexter Lawrence v. Ed Oliver should be a very interesting debate for the next year. The Houston product is more of an upfield player, though, so NFL teams will likely go with whatever player fits their scheme better at the top of the draft if they are viewed as equal talents.

If anyone got tired of my support of Josh Allen leading up to the 2018 NFL Draft, you are about to hear a whole lot more about him for the next year, too. Except it’s the superstar linebacker from Kentucky instead of the gunslinger out of Wyoming. The 2019 version was right behind Roquan Smith for me when I thought he might have been coming out, but staying in school could solidify the explosive tackler as a top-five pick.

Jim Harbaugh’s best recruit since becoming head coach of the Wolverines, Rashan Gary was the top-ranked high school player in the nation a couple years ago, and he has been as advertised for Michigan. The versatile defensive tackle has the athleticism to make plays on the edge, but I think he’s best attacking on the interior.

I’m not going to nail down a pro comparison this early, but Noah Fant looks like a slimmer version of Rob Gronkowski that isn’t quite the unstoppable cyborg that Gronk is. Fant only caught 28 passes last season, but he averaged 17.4 yards per reception, including ten scores, and while he isn’t getting much attention right now, I’d be shocked if he didn’t turn into a consensus first-round prospect and potential top-15 pick next year.

We had a few prolific college football wideouts take their talents to the next level, but A.J. Brown still has two more seasons of eligibility coming off an impressive 75/1,252/11 line for the Rebels. I doubt he lasts longer than 2018 with Ole Miss, though, as Brown has all the tools to be the first receiver off the board in 2019 with the ideal combination of size, speed, and ball skills.

It would have been awesome to see what Shea Patterson and A.J. Brown could have done together in the SEC this fall, but the dual-threat quarterback has been granted immediate transfer to Michigan—which is a tremendous get for the Big Ten. Patterson looks like a mix of Johnny Manziel and Patrick Mahomes II to me, and I think people will quickly get out of the groupthink and put him at or towards the top of the class when college football returns.

This is exactly where Wilkins was in my top-25 rankings last August, and he could have easily left school and been a first-round pick, but the fact that he returned to chase another championship with a loaded front says a lot about his character. Wilkins should be a force at the next level.

I don’t see Shane Beuchele being talked about when it comes to the 2019 NFL Draft, but he flashed a ton of upside as a true freshman for the Longhorns. He’s not even locked-in as the starter for a team that switched quarterbacks throughout the 2017 season and could do it again in 2018, but Beuchele is very accurate and showed up in big games.

Andraez Williams nickname is “Greedy”, which is obviously a great moniker for a cornerback that doesn’t want any receiver to catch the ball when he’s nearby, and he has the game to back up the name. Williams is long at six-foot-two, but he has the feet to mirror whoever he’s defending on the perimeter.

Deandre Baker doesn’t have the size that Greedy Williams does, but as we’ve seen in just the past two years alone—with Tre’Davious White, Adoree’ Jackson, Jaire Alexander, Denzel Ward, and Mike Hughes—you don’t need to be six-feet tall to be a first-round pick. Baker needs to do a better job locating the ball downfield, but he stays right on the hip of the receiver.

He could add a little more mass to his frame, but Jonah Williams looks like a prototypical left tackle for the next level. The best sign for Williams’ NFL outlook is his play against the loaded Clemson defensive line in each of the past two years. And playing in the SEC is quite the challenge, too.

There will be players who emerge during the 2018 season, but I think Bryce Love made the right choice in returning to Stanford, as the running back class next spring doesn’t look as stacked as it did this year or the year before. We all know what Love—a probable Heisman finalist—can do with the ball in his hands.

Raekwon Davis simply looks like he was created in a laboratory, and the fact that he returned from a gunshot wound to the leg less than a week before last year’s season opener and recorded a sack might lend credence to that possibility. Davis could push for double-digit sacks in 2018.

Unfortunately, Trey Adams suffered a torn ACL last season that led to his return to Washington, but a healthy campaign should put him squarely in the first-round conversation next year. Adams is a great athlete in a six-foot-seven frame, which will undoubtedly excite NFL teams.

It’s been said that this quarterback class is much weaker than the 2018 class, and I agreed with that heading into these rankings, but I’m not sure that’s true. Jarrett Stidham needs to show improvement in his second year with Auburn, but I think he will, and the arm talent is definitely there.

Clelin Ferrell was considered by many to be a Day 1 prospect if he would have declared following his redshirt sophomore year, but I think he made the correct choice in returning to school to try to get a little quicker and gain more experience. He will be one of the many stars on what could literally be an all-time great defensive line this season.

Justin Herbert has shown promise in each of the past two seasons with a combined 32:7 touchdown-interception ratio, and he showed his value in 2017 when Oregon dropped four-of-five games in his absence (with a -96-point differential) due to a broken collarbone. I would like to see Herbert work through progressions against tough competition over the course of an entire season.

Anthony Johnson started his college career at junior college, but he burst onto the scene with Buffalo last season, totaling 76 receptions for 1,356 yards and 14 touchdowns. The six-foot-two target has a game similar to Michael Thomas with strong hands and the ability to make plays at all levels of the field.

Right now, people are excited about Drew Lock’s big arm and bigger production (43 touchdown passes in 2017), and that alone has been enough to vault him into the first-round. However, I think he will need to use touch more consistently to put him atop the class, as right now, it’s basically all fastballs coming from Lock.

Damien Harris is a well-rounded, physical runner that should be a consistent option once again for Alabama in 2018, and he will likely provide more of the same in a couple years at the next level. He is very similar to former Heisman winner Mark Ingram, and that’s not just because he also plays for the Crimson Tide.

A six-foot-four target that knows how to play on the ground, N’Keal Harry is a crafty player with excellent ball skills. We will see how Herm Edwards features him in his first year back on the sidelines, but Harry could be a first-round pick with another strong season.

A lot of people are probably not convinced Trace McSorley can be a top prospect at his size, but the same things were being said about Baker Mayfield last season when many were calling him a Day 3 player at this time of year, and I thought he was a first-round prospect—and actually ranked him where I have McSorley. The Penn State product is accurate, mobile, and a winner.

The high-powered Oklahoma State offense lost their all-time great quarterback and wide receiver to the Steelers in the 2018 NFL Draft, but Justice Hill remains in Stillwater. The explosive back ended last season with ten scores in six games, and the offense should be centered around him this fall.