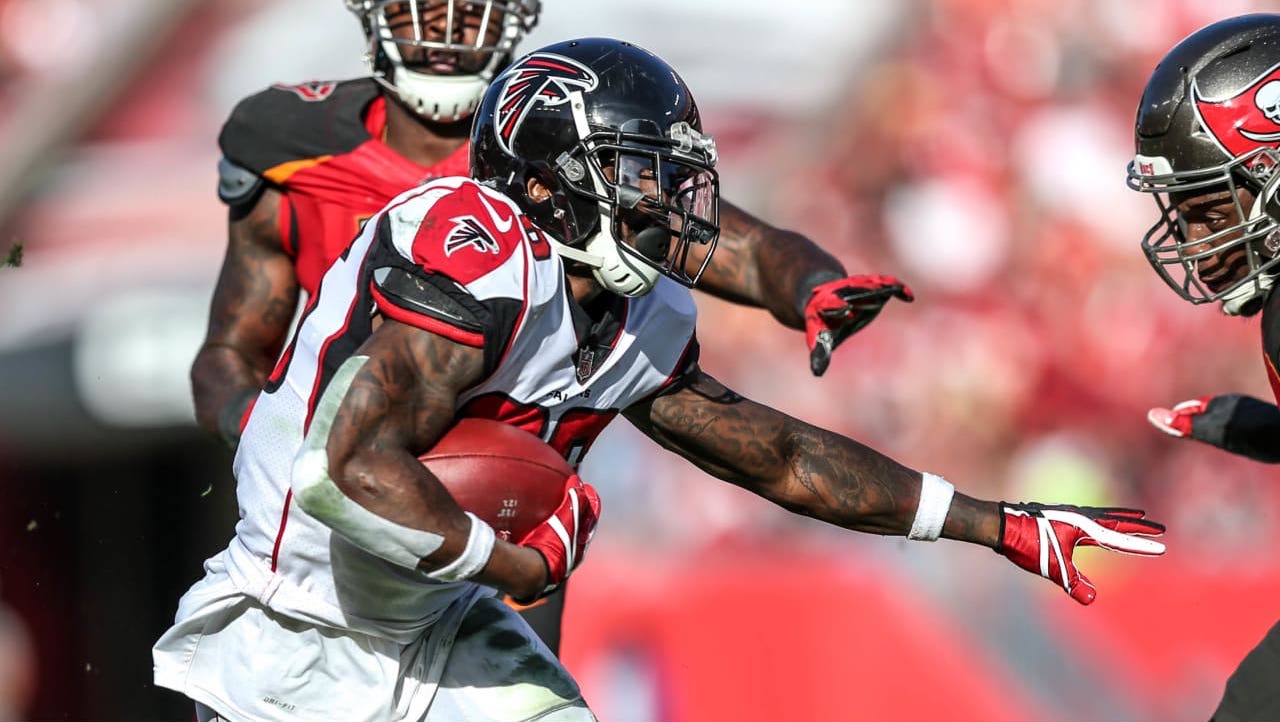 
While the AAF is giving people their football fix for the next two-plus months, the NFL is obviously still king, and the new league year is just over a month away. There will be predictions for where the top free agents will land closer to March 13, but all this week, I will choose the best fits for some notable players set to hit the open market, starting with quarterbacks and running backs.

Last week, the Buccaneers might have been a surprise atop my list of the best landing spots for Nick Foles, but it’s all about the personnel in what should be a high-powered offense. The franchise can’t waste a season of 66-year-old Bruce Arians’ return to the sidelines by trying to prove themselves right about Jameis Winston, and Foles would instantly boost a promising core of Mike Evans (26), Chris Godwin (23), O.J. Howard (24), and Cameron Brate (28)—all of whom can play “above the rim” to fit perfectly with the former Super Bowl MVP’s style. If defensive coordinator Todd Bowles takes care of the defense as I expect he will, it wouldn’t be crazy to call the Bucs a legitimate Super Bowl contender by signing Foles.

No one really knows what the future holds for Sam Bradford, but if he wants to continue playing, I think quarterback-needy teams should give him a call. Bradford has familiarity with Giants head coach Pat Shumur after the two were together in St. Louis (2010), Philadelphia (2015), and Minneosta (2016-2017), and I would argue that he gives New York the best chance to win in 2019 before potentially moving up for a signal-caller in what looks like a top-heavy 2020 class. When healthy, Bradford has elite accuracy, intelligence, timing, and arm strength.

Washington doesn’t have much at receiver for whoever potentially replaces Alex Smith (leg) in 2019, but we saw Teddy Bridgewater thrive in a low-volume, game-manager role during his time with the Vikings to start his career, and I think he’s simply a winner—similar to Smith—that plays better than the numbers suggest. Behind one of the league’s best offensive lines, Teddy would be able to pick his spots in a run-heavy offense that relies on play-action passes, giving the Reskins a very capable stopgap and allowing himself to rebuild value before hitting free agency again in 2020.

When you consider the draft and other potential trade options like Joe Flacco and Ryan Tannehill, multiple quarterbacks will likely struggle to find an opportunity where they can compete for the starting job this summer. For Robert Griffin III, the best situation might be returning to Baltimore and mentoring Lamar Jackson, as there is a real chance the backup sees sees meaningful action for a playoff contender based on how much we saw the young starter run in 2018. I think RGIII has the talent to make a Foles-like championship run.

It sounds like Cam Newton’s shoulder injury that required surgery isn’t as serious as initially feared, but until he is fully healed, I think it might be a bit of a tricky situation for Carolina, especially as Ron Rivera enters a potential make-or-break year. Personally, I’m a fan of undrafted quarterback Kyle Allen—who threw for 228 yards, two touchdowns, and zero interceptions in a Week 17 victory—but the franchise might feel Taylor is an upgrade over a guy with just one career start. If so, Tyrod’s conservative style is a good fit for underneath targets Christian McCaffrey, Curtis Samuel, and D.J. Moore, and he can hit on the deep ball when one of the speedsters get behind the defense.

The Ravens have been floated as a possibility for Le’Veon Bell, and he would probably love to face the Steelers twice a year in the AFC North. Plus, as of now, I’d probably say that’s his most likely landing spot. However, the Jets might be a better destination because they have a bigger need at the position and would probably take advantage of his superstar skillset in a more versatile role than Baltimore has planned. Overall, I think Bell in the Ravens’ system is a bit of a waste for both sides, but Adam Gase would center everything around the three-time All-Pro.

This is a dream combination in my opinion, as Tevin Coleman is basically the prototypical Raider (at least as Al Davis would have seen it) thanks to game-breaking speed and shot-out-of-the-cannon acceleration, but he is more than just a sprinter at running back. As we’ve seen over the past four years with the Falcons, Coleman can shed arm tackles, and Jon Gruden would surely love the toughness of a back that rushed for 2,000 yards on a broken foot in college. It’s also worth noting that new general manager Mike Mayock was high on Coleman coming out of Indiana.

Tampa Bay isn’t going to sit around and hope Bruce Arians develops a bunch of young players to compete in the future, so look for them to possibly poach a running back from inside the division. Mark Ingram will turn 30 at the end of the year, but he doesn’t have a ton of tread on the tires, and 18-20 weekly touches as the clear starter in a talented offense should be alluring in free agency. Plus, the Bucs can hopefully get more out of 2018 second-round pick Ronald Jones II as a change-of-pace slasher that brings some speed off the bench.

A reunion with the Raiders could be in the cards for Latavius Murray based on the relationships he built with some of his former teammates (including Derek Carr), but I doubt they would sign two starting-caliber runners in free agency. Instead, Murray could stay north and join the Bills, giving Sean McDermott’s squad arguably the best short-yardage back in the league to pair with Josh Allen and his unmatched mobility/power at quarterback. Latavius can also catch passes out of the backfield and stone blitzing defenders.

Health permitting, Derrius Guice is expected to lead the Redskins backfield in 2019, but that doesn’t mean they won’t want Adrian Peterson to return. While AD would obviously rather be featured again coming off a 271-touch campaign, I doubt he gets that opportunity considering the upcoming draft class looks to have upwards of 12-15 starting options, including multiple prospects that project to be available on Day 3. Guice-Peterson would easily be the most violent duo in the NFL.

Although he’s the youngest of the top free agent backs, Jay Ajayi could have a cold market in March because he’s coming off a torn ACL and has general concerns about longevity (which caused him to fall to the fifth round of the 2015 NFL Draft). Getting healthy and returning as the leader of Philadelphia’s backfield committee is probably best for Ajayi, who has rushed for 5.1 yards per carry over the past two seasons with the Eagles.