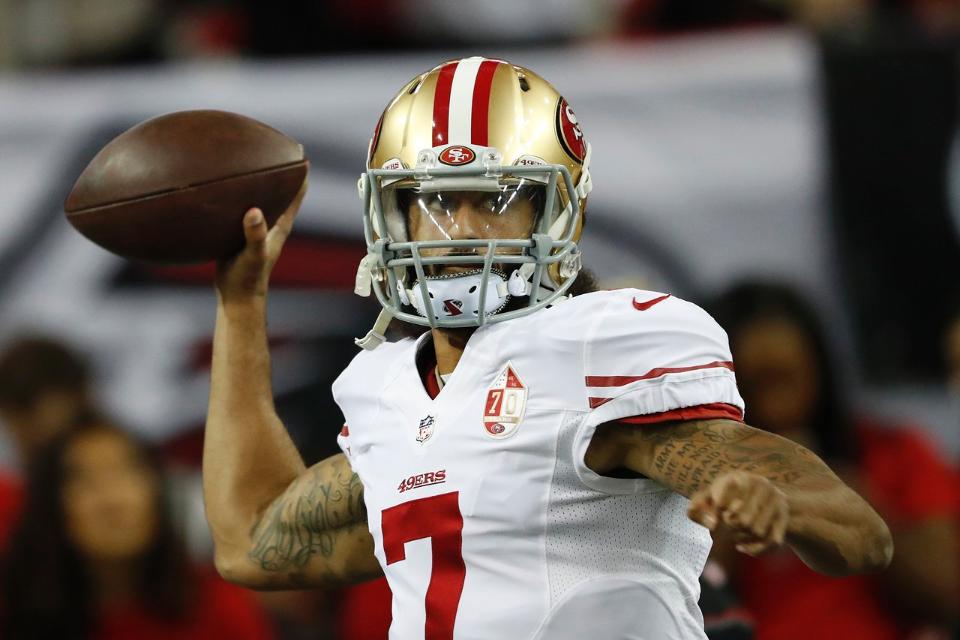 Breaking Down the Colin Kaepernick Situation


There has been a lot of talk in recent days about former 49ers quarterback Colin Kaepernick not being signed. Josh McCown, Nick Foles, and Mark Sanchez are among some of the quarterbacks that have gotten jobs (in McCown’s case, possibly as a starting quarterback for the Jets).

Everyone knows the story by now. Kaepernick decided to kneel for the national anthem all last season because he believed the United States “oppresses black people and people of color.” His stance drew the ire of many people for multiple reasons—one of the main reasons being the method of his protest.

Some people don’t like that Kaepernick disrespected this great country by kneeling during its’ anthem. During the season, he drew almost universal criticism for wearing a Field Castro shirt and praising the Cuban dictator.

Kaepernick did—and continues to do—some good, like donating $400,000 through his foundation (he pledged $1 million of his salary at the start of last season and is donating $100,000 per month for ten months) to “fight oppression of all kinds globally, through education and social activism.”

The argument that Kaepernick is not getting a job solely because of his protest is silly. Might it be a component of it? It probably is. But if Kaepernick was playing at the same level he was a few years ago, he likely would have a job already. The thing is, he did not play that well last season.

Despite his numbers (16 touchdowns compared to just four interceptions), Kaepernick was incompetent at times. Chip Kelly’s offense inflated his numbers drastically, and while he did play well at certain points in the season, overall, he played below average. A previous article written about Kelly gives just two of a few examples of Kaepernick’s inaccuracy (he had a below-60% completion percentage).

If a quarterback misses the type of throws Kaepernick missed last season, it kills the offense. It’s lazy to just look at the numbers and say Kaepernick played even close to a high level in 2016.

Is Kaepernick better than McCown, Foles, and Sanchez? It’s debatable. But none of those guys, or the other quarterbacks that have signed with teams, bring the type of distraction that Kaepernick would bring. The National Football League is about winning games. Bringing in Kaepernick—and all the media distraction that comes with him—is not going to help you win football games.

Signing Kaepernick may also hurt part of the business side of football—ticket sales. While Kaepernick certainly has some supporters, there are people that would refuse to watch their favorite team if they signed Kaepernick. San Francisco is one of the most progressive places in the country, and people still booed Kaepernick for kneeling for the anthem there. Another place, like Philadelphia or Chicago, would not be as welcoming.

Teams do not have to sign players just because the public wants them to. Jay Cutler is arguably a better and more accomplished quarterback than Colin Kaepernick. He’s also without a job, but there is no discussion of why Jay Cutler isn’t drawing interest from teams.

Robert Griffin III was one of the best quarterback prospects in the last ten years. There hasn’t been any known interest in him either. Where is the discussion of RGIII being out of a job?

Again, the national anthem protest is not the only thing that goes into Colin Kaepernick seemingly unable to get another chance in the NFL. But it’s part of it.

The bottom line: NFL owners have the right to do whatever they want with their teams. They can choose to sign or not sign whoever they want. It’s their team.

Colin Kaepernick was free to make his own decision to kneel for the national anthem.

NFL owners are now free to make theirs.