Home / frontnfl / One Year Ago: Revisiting the Chip Kelly Firing 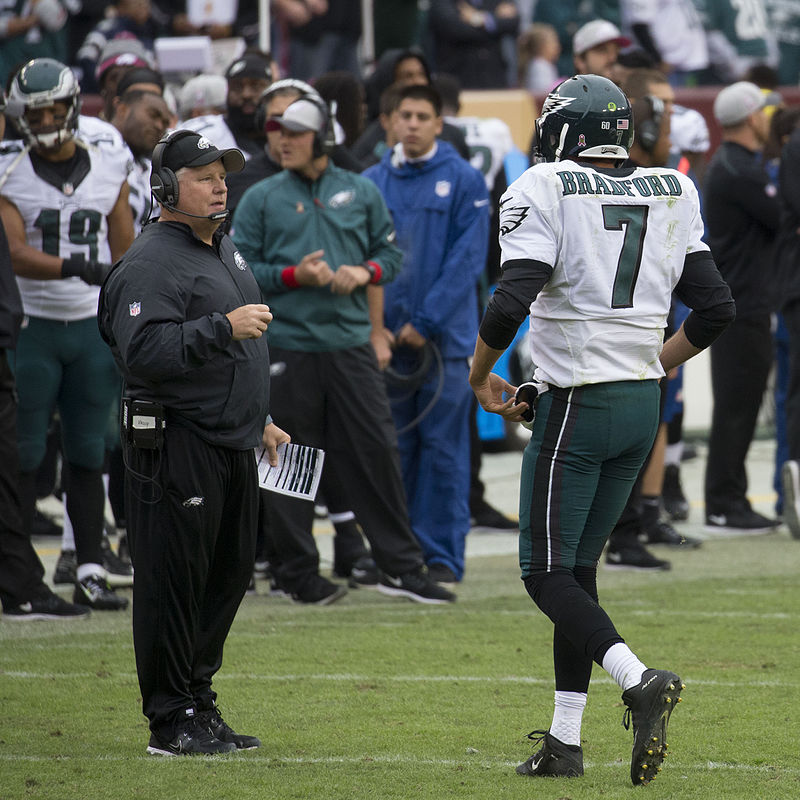 One Year Ago: Revisiting the Chip Kelly Firing

One year ago today, former Eagles head coach Chip Kelly was fired by team owner Jeffrey Lurie before the team’s final game of the season against the Giants. The move was met with rejoice almost universally from Eagles fans. Most people in and around Philadelphia hated Chip Kelly, and they could not have been happier for him to go. According to the majority, Kelly ran a “college offense” that doesn’t work in the NFL, can’t relate to his players, and ruined the Eagles.

As I’ve written before, I believe they are 100% mistaken.

People argue that Kelly’s current team, the San Francisco 49ers, sitting at 2-13 means that they are right about him—he is a terrible coach that belongs in college. These people look at the record and nothing else.

Winning is obviously very important. If you are a football coach that is not winning, you are not going to have a job for very long. But look at this 49ers roster. The 49ers depth chart from two years ago is not even comparable to this year. Even last season’s 49ers team was much more talented than this one.

Take Week 16, for example. None of the 49ers’ starting receivers versus the Rams were even with the team in offseason OTAs. That is obviously less than ideal.

None of those players are on the team anymore.

The 2016 49ers are 2-13 because they are young, not experienced, and—to be frank—not very good. Bill Belichick himself might have trouble winning games with this team.

Quarterback Colin Kaepernick has 15 touchdowns and four interceptions in his 11 games this season—his best year since 2013, but it would be much better if Kaepernick could throw accurately. Kaepernick has a 57.9% completion percentage, and it is because he has very poor accuracy and ball placement on his throws.

For example, from Week 15 against the Falcons, Kaepernick kills a drive by throwing a terrible pass on third down to an open receiver:

Things like that cannot happen if an offense—and team—wants to be successful. Instead of a drive continuing, the defense is put on the field to face an elite Atlanta Falcons offense.

Burbridge would have had a huge gain if Kaepernick could have simply hit him in stride.

There are many examples of Kaepernick being extremely inaccurate, hurting the 49ers offense. Unfortunately, Kaepernick seems to be the 49ers best option at the moment. That will change in 2017. With a new quarterback, the Niners will be much better off.

Chip Kelly and former Eagles (and current 49ers) front office member, Tom Gamble—who was kicked out by Howie Roseman before Roseman was then kicked out of power—were together at yesterday's Foster Farms Bowl, scouting players on Utah and Indiana. This could have been a great combination in Philadelphia, and with current 49ers GM Trent Baalke likely on his way out the door, it may now happen in San Francisco.

Kelly’s offense is not the problem. He doesn’t “belong in college,” and many coaches that have been in the NFL for years agree.

Since then, Pete Carroll, Wade Phillips, and others have said they are fans of Kelly. Before their preseason game, Broncos defensive coordinator Wade Phillips tweeted this:

Chip Kelly does an amazing job with his offense. Without game planning and even with planning his offense can present a lot of problems

Phillips presided over one of the best defenses in NFL history last season—think we can take his word for it.

Just the other day on a conference call with San Francisco reporters, Pete Carroll voiced strong support of Kelly when he was asked if he thinks Kelly can be or is a good coach in this league:

"What are you doing? Why would you ask me that? Of course I think that. (baffled sound) I don’t even know why you’d ask that. He is an extremely successful coach. He knows exactly what he’s doing. He’s been at the top of the game when he’s had his opportunities and he’s shown it in the NFL, in college, and all of that. And uh, I don’t know him very well but I’ve really admired the work that he’s done, and the innovations that he’s brought to the game, and the impact he’s had on it."

So, we’ve got it out of the way that successful people in the NFL all think Chip Kelly belongs in the NFL, so why is the perception so different from the reality?

People thought Chip Kelly ruined the Eagles, but that is far from the truth. Many complain that Kelly got rid of DeSean Jackson, but he was seamlessly replaced by Jeremy Maclin. Jackson was also immature at the time (he has since matured), as opposed to Maclin who was never an issue off the field.

Three of the Eagles’ biggest additions in the 2015 offseason were Byron Maxwell, Kiko Alonso, and DeMarco Murray. Maxwell has been a top ten—if not top five—corner for the past season-and-a-half. Alonso was not 100% last year off his torn ACL and has gone on to rack up 110 tackles, two interceptions, a forced fumble, and looks like himself again with the Dolphins. DeMarco Murray is third in the NFL with 1,266 rushing yards this season.

The only place Kelly might have messed up is not franchise tagging Jeremy Maclin, but Kelly himself stated that he never did contract negotiations and made it clear he wanted Maclin back. Maclin also made it clear he wanted to be back with the Eagles, but it just did not work out. Kansas City, a team close to home for Maclin, did offer him $11 million per year (more than the Eagles).

LeSean McCoy was traded, but it got the Eagles Alonso, and they replaced McCoy with DeMarco Murray who is obviously also a good running back. The Eagles just couldn’t block inside, making it almost impossible for Murray to have success.

Kelly’s addition at quarterback, Sam Bradford, was clearly worth it. Behind a terrible offensive line in Minnesota, Bradford has a 17:4 touchdown/interception ratio and is on the verge of setting an NFL record for completion percentage (currently Bradford is at 71.3%), all while going through two offensive coordinators, many injuries on the offensive line, and the loss of Adrian Peterson.

The Sam Bradford and Chip Kelly combination for another season with the chance to progress had great potential. They were 7-6 together in games Bradford started and finished in their first season together, with Bradford coming off a torn ACL.

One year later, the Eagles are in the same position: 6-9 with one game to go. Some things have changed:

They have a presumed franchise quarterback, rookie Carson Wentz.

They have the highest time of possession per game in the NFL, after having the lowest per game under Kelly.

Executive VP of Football Operations, Howie Roseman, is running things for the Eagles. He and owner Jeffrey Lurie have taken a more hands-on apporach.

And the Eagles are much worse off than they were at this time last year.