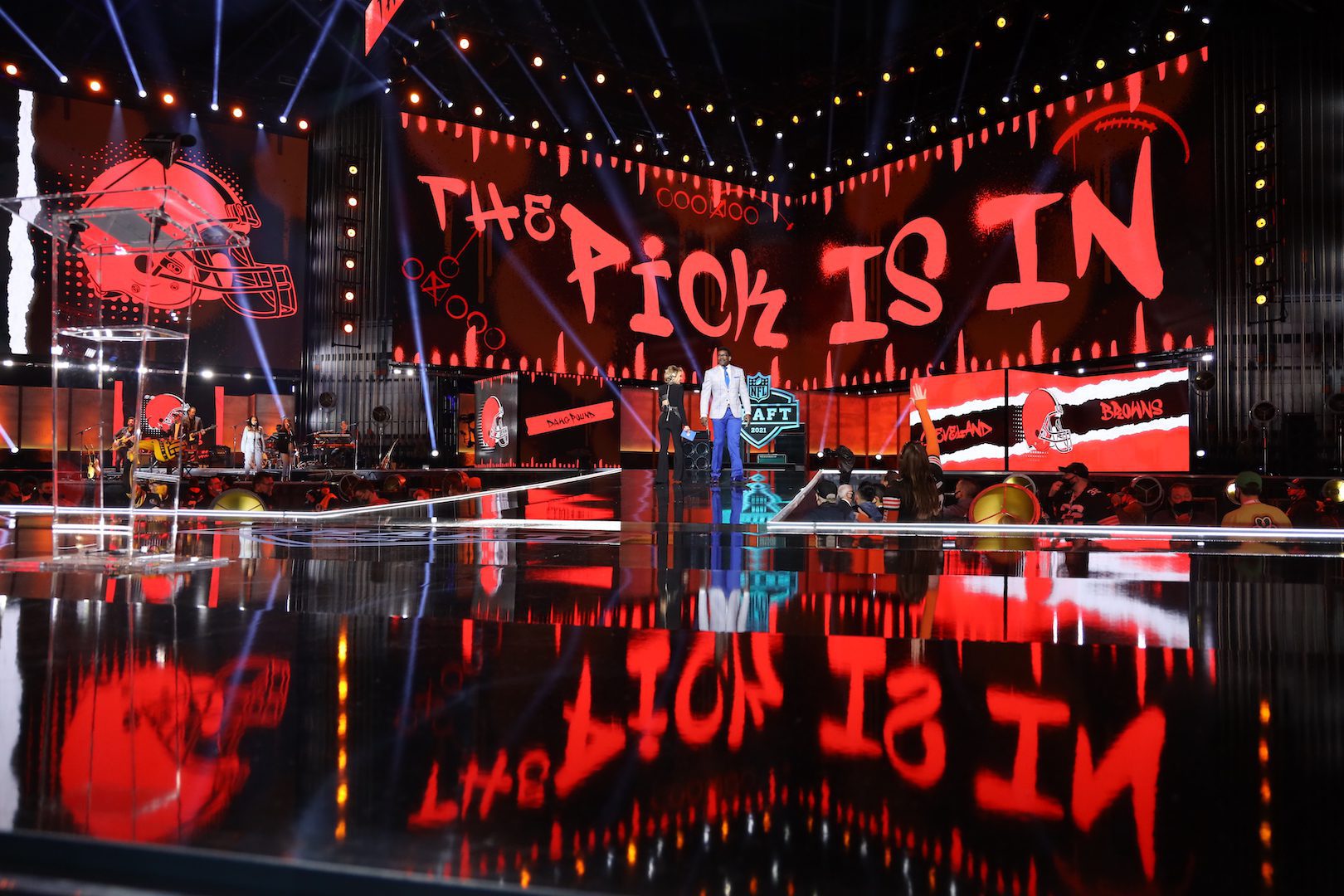 
The 2022 NFL Expansion Series, which shows what an NFL expansion team might look like in 2022, concludes with the NFL Draft! A 33rd NFL expansion franchise would be facing major challenges, but hitting on draft picks can help create a quick contender in a competitive league filled with parity. If you missed the first three parts of the series, you can check them out via the links below:

This is where the Atoms roster stands heading into the 2022 NFL Draft:

The edge rushers are intriguing because they are such an important position and would be a strong fit in DeMeco Ryan’s defense, but this ultimately came down to two of the big guys: Alabama offensive lineman Evan Neal and Georgia defensive lineman Jordan Davis. The Atoms decide on Neal, who should be a cornerstone left tackle that helps make our offensive line one that should be able to bully teams from Year 1 of our existence.

Cornerback is a strength for us entering the draft, but I love the value of Roger McCreary here at the top of Round 2. The Auburn product stayed in the hip pocket of his opponents throughout his college career, and—while I think he certainly has the ability to play on the outside—he might start at nickelback as a rookie. Our cornerback group is now very deep, which is a major positive in today’s wide-open NFL.

Knowing that Nakobe Dean doesn’t go until pick No. 83 in real life (due to medical concerns) I could have maybe grabbed Nebraska center Cam Jurgens here instead while getting Dean with the next pick. But I didn’t want to cheat or push it too much. Dean would have been in strong consideration at pick No. 34 despite the medical, so we’re running up the card here and taking Georgia’s defensive leader from their national title run.

There are concerns about the consistency as a passer, which is why Malik Willis dropped to the third round. But with our quarterback situation still murky long-term, the dual threat out of Liberty is well worth taking a big swing at to begin the third round. Willis has great leadership qualities and can at least give opposing defensive coordinator something to think about as an option off the bench, even if he doesn’t develop into a franchise quarterback.

I was very surprised that Isaiah Spiller dropped outside the top 100 picks in the 2022 NFL Draft. Here, the Atoms stop his fall early and take him at pick No. 83 in the third round. As Texas A&M head coach Jimbo Fisher said about his former running back, he’s an all-around talent that produced all three seasons in college. Spiller can immediately contribute as a receiving option out of the backfield.

Damone Clark dropped in the draft because he’s set to miss most of his rookie season due to a herniated disc in his neck. An expansion team can’t really afford to do anything but go best player available, and you could argue that Dean and Clark each profile as high-upside lottery tickets with the hope of at least one of them hitting as an impact starter at linebacker. Five of our six first selections are out of the SEC.

Dominique Robinson, a former receiver, has the size and tools you’re looking for in an edge rusher—and he could prove to be a steal at this stage in the draft. I think our pass rush rotation has a high ceiling.

Yet another player that dropped because of medical concerns (he actually went undrafted), former Clemson wide receiver Justyn Ross is an extremely talented weapon. We’d have to see how everything checks out, but I’d be pushing to draft him. Clemson head coach Dabo Swinney says that Ross could be the “greatest free agent ever” if he can stay healthy.

Former Clemson and Georgia cornerback Derion Kendrick is highly competitive, and he probably dropped so far just because he didn’t run a good 40 time during the pre-draft process. In the sixth round, I’m thrilled with someone that played well at two big-time schools and was seen as a potential top-100 selection before the pre-draft process.

Brittain Brown was fantastic in a complementary role in the UCLA backfield in 2020 and 2021, and he was coached well by former NFL running back DeShaun Foster in a Chip Kelly offense. His style is a fit with the Atoms.

Safety happens to fit a need as a spot we wanted to add more to, and Smoke Monday could have been selected a few picks ago. At Auburn, Monday helped set a tone defensively, and he’s in a good spot backing up Jaquiski Tartt to start his career.

Following the draft, the Atoms have signed kicker Cody Parkey and punter Dustin Colquitt. To sign our draft class, we signed offensive tackle La’el Collins to a new three-year, $24 million contract with a signing bonus that lowers the 2022 cap hit by $3 million.

Throughout the summer, we’ll probably have to make some trades to create more positional balance and add another interior defensive lineman (perhaps Dee Ford, Clelin Ferrell, or A.J. Bouye could be on the move). But overall, I like how we stand in our first year. The strong offensive line should help us be able to run the ball, and Coach Ryans should get the most out of our defense, with the key being whether the Atoms’ front four can get after opposing quarterbacks.

I think our offensive line, which is extremely deep, should at least be a top-ten unit with a shot at being top five—and the o-line is arguably the most important part of a professional football team aside from the quarterback. The biggest question mark is probably the status of our skill players on offense. I think the running backs can do some damage behind the offensive line, but we’ll need our receivers and tight ends to step up; Julio Jones staying on the field and producing like he’s capable would be a massive boost for our outlook.

Defensively, safety will be a position we’ll need to target long-term—and it could be the weak spot in 2022. I feel good about competition and depth leading to solid play at corner, and the linebacking corps led by Jordan Hicks should make plays. The pass rush should have some sneaky upside, particularly with a deep edge rotation.

If all goes well (the team stays healthy, Baker Mayfield takes care of the ball), the Albuquerque Atoms might have a shot at nine or ten wins in their inaugural season. But, while I don’t like to put limits or ceilings on things, it’s difficult to envision the team being a legitimate Super Bowl contender—it’s more likely that we are in the mix for the top pick in 2023.