Home / frontnfl / Can Brock Osweiler Save The Broncos? 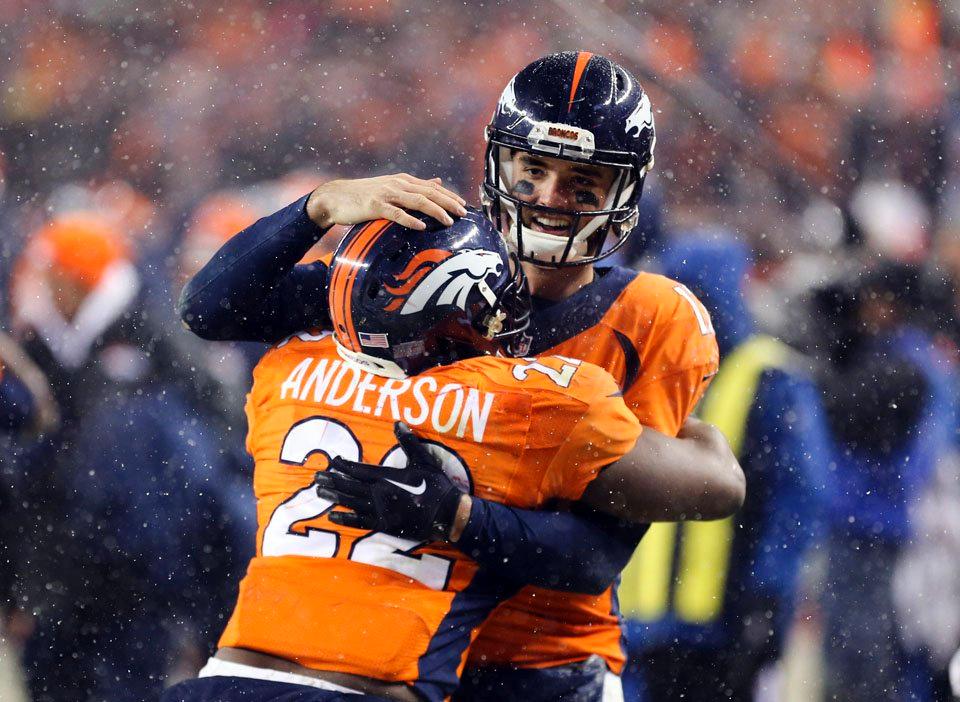 Can Brock Osweiler Save The Broncos?


In November of 2015, the Denver Broncos benched their established starting quarterback and turned to longtime backup Brock Osweiler, hoping to revive a moribund offense that was struggling to put points on the board and turning the ball over at an astounding rate. Osweiler wasn’t spectacular—he threw ten touchdowns against six interceptions—but he was good enough to lead Denver to five wins over their last seven games, including a wild and woolly fourth-quarter comeback against the then-undefeated Patriots. In the postgame glow of that season-defining win against New England, it seemed as though Denver was destined to be Brock’s town; but just four months later, Osweiler spurned both destiny and Denver by signing a four-year, $72 million contract with the Houston Texans, and then rubbed salt in the wound by skipping the Broncos’ Super Bowl ring ceremony. At that time, no one would have anticipated Osweiler ever throwing another pass in blue and orange. But history repeats itself in unexpected ways, and here we are—two years later, the Broncos are once again turning to Osweiler to try to save a season in danger of going off the rails.

There’s no denying how bad Denver’s offense has been since the third week of the season—they have dropped four out of their past five games and failed to put twenty points on the board even once during that stretch. In the three games since their bye week (all losses), they have turned the ball over eleven times and generated just three touchdowns, two of which came in garbage time late in the fourth quarter. It’s not exactly surprising that they would want to make a switch at quarterback, given how inept their current starter, Trevor Siemian, has looked at times. After a promising start to the season, Siemian’s play has declined catastrophically—trying to come back from big deficits behind a bad offensive line, Siemian has developed a bad habit of trying to force low-percentage throws while on the run, which has led to some mind-numbingly ugly turnovers. The Broncos are hoping that Osweiler can inject some measure of stability into an offense that has been careening through games like a capsizing cruise ship—but is there any reason to believe he might offer an improvement over Siemian?

Let’s start with the raw numbers, which don’t paint a particularly rosy picture if you’re a Broncos fan. Although Osweiler entered the league four years before Siemian, he spent most of his career riding the bench behind Peyton Manning, so we have two pretty similar sample sizes to compare—they have both started 21 games, and Osweiler has thrown 819 NFL passes to Siemian’s 733. Here’s how their career lines stack up:

There’s not much of a case there for Osweiler being an upgrade over Siemian—his career numbers are actually slightly worse across the board. He completes fewer passes for fewer yards per attempt and turns the ball over at about the exact same rate. And if you dig past the raw numbers, there are even more reasons to be concerned about Osweiler. Pass pressure has been perhaps the biggest issue for Denver’s offense this season. Siemian has been sacked 25 times through Denver’s first seven games, and committed his most egregious mistakes when he was trying to get away from incoming pass rushers. Only five offensive lines in football have allowed more sacks in 2017 than Denver’s unit, and four of those have played at least one more game than the Broncos due to Denver’s early bye week (one of them, the Jets, has played two more games than Denver). You would assume that part of the reason Denver is making the switch to Osweiler is because they hope that he will do a better job of handling that pass pressure than Siemian has. Um…maybe don’t hold your breath on that.

I don’t yet have access to unpressured/pressured DVOA splits for the current season, but we can look at the splits from 2016, when both Osweiler and Siemian spent the full year starting for their respective franchises (DVOA stats courtesy of Football Outsiders, which as far as I’m concerned is the only reason for the internet to exist). Once again, the stats aren’t kind to Osweiler. Siemian was hardly good under pressure in 2016 (no quarterback is other than Aaron Rodgers, who is an actual superhero), but he ranked a respectable 20th (out of 34 qualifying passers) in DVOA when pressured. Osweiler, on the other hand, ranked all the way down at 31st, with an ugly mark of -100.6%. Only three quarterbacks were worse under pressure than Brock, and two of them—Case Keenum and Jared Goff—were playing behind the pathetic Rams offensive line, whose pass protection strategy in 2016 basically consisted of politely asking pass rushers not to run past them. And Osweiler was playing behind a relatively solid offensive line in Houston—putting him in the pocket behind this Broncos O-line seems a lot like pouring gasoline on a fire.

Since this hasn’t been a very fun article for a Broncos fan to read (or write!), I should point out that there are some reasons to believe that the Broncos offense might get better. Emmanuel Sanders will be back in the lineup this week in Philadelphia after missing the last two and a half games, and his absence has certainly been felt—with Sanders off the field, defenses have been free to concentrate their gameplan on smothering Demaryius Thomas in pass coverage, and the rest of the Broncos’ middling receiving options—Bennie Fowler, A.J. Derby, Jordan Taylor, et al.—have been unable to pick up the slack. Fowler was particularly bad in Kansas City last week, as he had some backbreaking drops, including a would-be touchdown on a drive where the Broncos eventually had to settle for a field goal. On top of that, the Broncos can expect to improve simply by shifting the onus away from the quarterback position. Denver’s offense has been better this season when they focused more on running the football—Siemian threw at least 35 passes in each of Denver’s four losses, and only topped 30 once in their three wins. A steady dose of C.J. Anderson and Jamaal Charles is crucial if the Broncos want to get their season back on track. And somehow, even after dropping four of their last five games, Denver is still right in the thick of the playoff race, with a defense that is more than capable of propelling them to the postseason if the offense can simply avoid shooting themselves in the foot over and over. Despite everything that has gone wrong for the Broncos, they still have enough time and talent to turn their season around. They don’t need Osweiler to carry them—they just need him to stay out of the way as much as possible.

The big question is what Denver will look to do at the quarterback position in the long term. It’s clear at this point that Siemian is not a franchise quarterback, and Osweiler has done little to show that he could be that guy, either. They still have 2015 1st-round pick Paxton Lynch waiting in the wings, but the early returns on him haven’t been promising—he has twice failed to win the starting job away from Siemian despite being given every opportunity to prove himself in training camp and the preseason. Lynch looked uncomfortable dropping back from under center in the preseason and downright terrified whenever pass pressure invaded the pocket. There’s still a chance that he could round into a starting caliber passer, but how long do the Broncos want to keep kicking the can down the road at the game’s most important position? They have already wasted one year of a Super Bowl-caliber defense, and they look to be in danger of wasting another. The clock is ticking on this once-in-a-generation defensive unit–they already had to part ways with T.J. Ward to cut costs, and with extensions looming for talented contributors like Bradley Roby and Shane Ray who are still on their rookie deals, Denver’s cap situation is only going to grow more complicated.

Will John Elway be willing to keep playing the waiting game with Paxton Lynch? Maybe, but it’s not hard to imagine Elway making a big move at quarterback in the coming offseason. That could mean clearing some cap space to make a free agent run at Kirk Cousins, who looks less and less likely to return to Washington with each passing week. It wouldn’t be easy to fit Cousins in Denver’s budget—the Broncos would likely have to cut bait on star cornerback Aqib Talib, whose contract carries no dead money after this season, to make a Cousins deal workable. There’s also a chance that Eli Manning or Philip Rivers (whose situations I wrote about a couple weeks ago) could be available in the coming offseason—maybe Elway could convince Eli to follow his big brother’s footsteps to Denver in pursuit of one more championship. One way or another, it’s hard to imagine Brock Osweiler being more than a temporary Band-Aid on Denver’s long-festering quarterback problem.