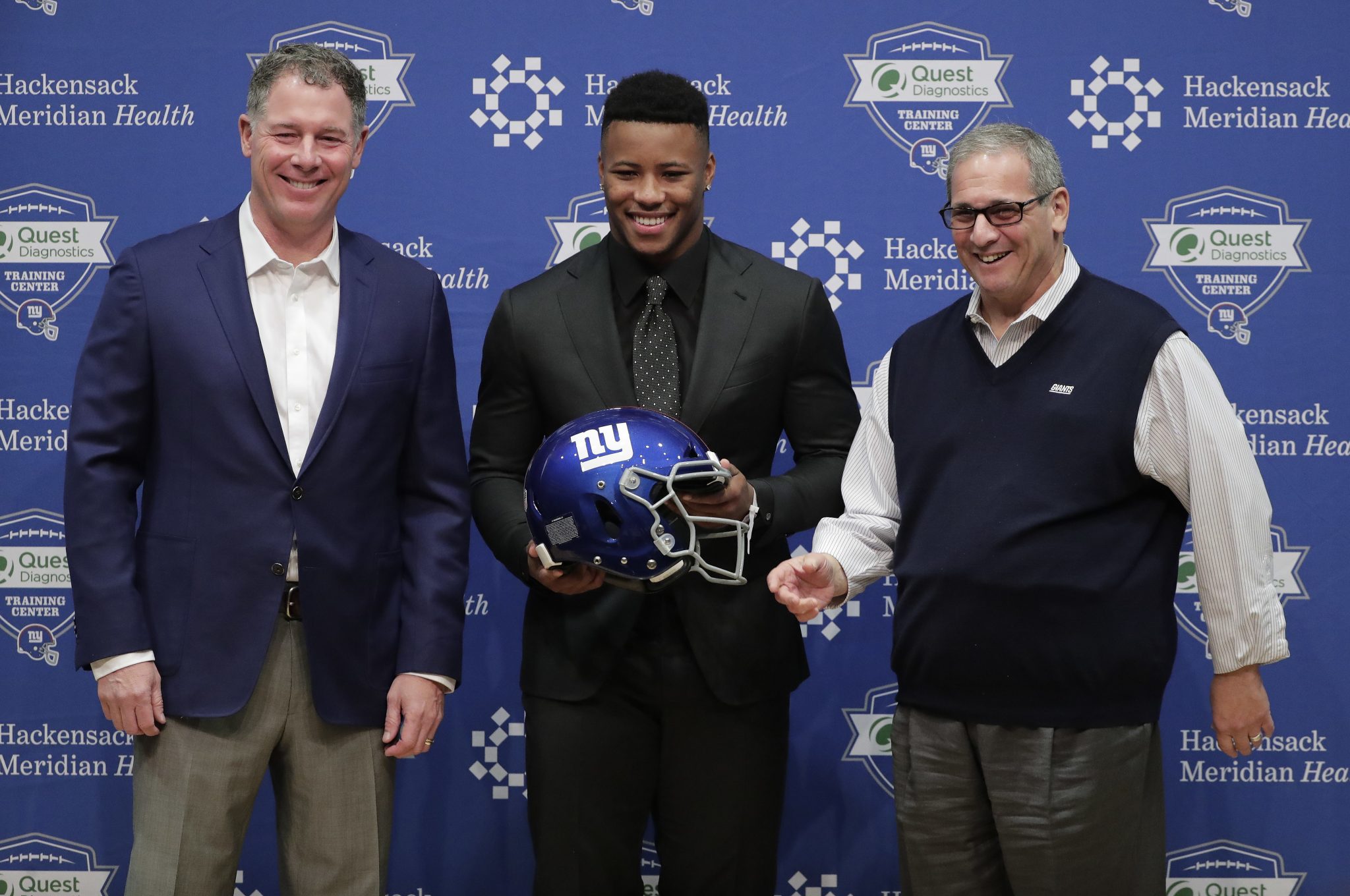 Early 2018 NFL Rookie Of The Year Candidates And Darkhorses


Offensive Rookie of the Year Candidates

It should come as no surprise that the best running back prospect since Adrian Peterson—if not, ever—is at the top of the list, and he is the runaway favorite for Offensive Rookie of the Year in 2018. New York really bolstered their offensive line with free-agent Nate Soldier at left tackle and second-round pick Will Hernandez at left guard, which should give Barkley plenty of room to run. Plus, he’s a mismatch nightmare as a receiver, and head coach Pat Shurmur will know how to get him the ball in a variety of ways. Saquon could quickly become one of the true superstars in the league.

I thought Baker Mayfield was the fourth-best quarterback prospect in the class (behind Josh Allen, Sam Darnold, and Lamar Jackson), but part of that was due to character concerns both on and off the field. Also, the more I watched, the more I believed he needs a really good situation around him similar to Case Keenum last year in Minnesota to be successful. But fortunately, that’s exactly what he has in Cleveland with a loaded receiving core, a three-headed monster at running back, and one of the best offensive lines in the NFL. The talent isn’t limited to one side of the ball, either, and if Mayfield is named the starter, I think the Browns might be able to fight for an 8-8 record if Hue Jackson can stay out of the way. That would put the first-overall pick squarely in the ROTY conversation.

Kerryon Johnson (Lions), Nick Chubb (Browns), and Sony Michel (Patriots) are some other notable running back candidates, but the No. 59 pick will have a much better opportunity for immediate playing time and a huge chip on his shoulder after falling in the draft for “character concerns” that still aren’t exactly clear. Guice will leave the field in favor of Chris Thompson on passing downs, but he should hold off early-down competition from Samaje Perine and Rob Kelley with a strong preseason. A 1,000-yard, 10-touchdown season is definitely reachable.

Offensive Rookie of the Year Darkhorses

I’m not sure being the seventh-overall pick can qualify as a “darkhorse,” but the overwhelmingly-negative public perception of Josh Allen is not really based in reality, so it’s probably a fair classification. People believe Allen needs at least a year on the bench to develop, but the same was said of Cam Newton in 2011, and all he did was become the first rookie in NFL history to throw for 4,000 yards on his way to winning Rookie of the Year. Cam also rushed for 706 yards and a whopping 14 touchdowns in that historic season, and while Allen is unlikely to be the threat Newton was in scoring territory, he has the mobility to take over a game by making plays with his legs (both as a runner and a passer). I would say the weapons Buffalo has could be a concern, but it will be a lot better than what Allen had at Wyoming.

Despite three second-round picks in their arsenal, Indianapolis declined to address the running back position on Day 2, and instead used an early Saturday selection on Nyheim Hines. The former NC State track star is only five-foot-eight, but he’s a solid 197 pounds and showed great contact balance in college, where he provided value as a runner, receiver, and returner. And remember, Marlon Mack is the presumed starter, but he was the 143rd pick in the 2017 NFL Draft, so Hines (104th) should have every opportunity to win the lead role in what should be a committee approach under Frank Reich. Even if he sees just 10-12 touches per game, that should be enough to make an impact for a player I compared to Tyreek Hill when he lines up at running back.

A tight end has never won AP Offensive Rookie of the Year, so this is a longshot if there ever was one, but Mike Gesicki has the size and ball skills to be one of the NFL’s premier red-zone threats from the moment he steps on the field. One of the biggest knocks on the Penn State product is his overall effort as a blocker, but I think Gesicki makes up for that with toughness as a receiver, and I’m fairly certain that Adam Gase wouldn’t have targeted him in the second round if he didn’t feel the same way. Even as a rookie, there’s no reason the six-foot-six target can’t be among the league leaders in touchdowns after inferior talent Julius Thomas scored 24 touchdowns in 27 games with Gase in Denver back in 2013-2014.

Defensive Rookie of the Year Candidates

The added emphasis on the passing game in recent years has given the edge to pass rushers and cornerbacks for Defensive Rookie of the Year, but Roquan Smith is a future superstar that should make an early impact in the NFC North. The former Georgia linebacker will make plays all over the field, and Chicago is counting on him to lead an underrated defense that is looking to go from “very good” to “elite.” A couple big plays against the likes of Aaron Rodgers, Kirk Cousins, and Matthew Stafford in the division would go a long way to the Bears being contenders and Smith establishing himself as one of the game’s best at the position.

Cleveland surprised by opting for cornerback Denzel Ward over defensive end Bradley Chubb with the No. 4 pick, and while I really like Ward, it sounds like Cleveland might have gone for the combination of need and talent rather than simply taking the best overall player available in Chubb. Even with Von Miller and Shane Ray already on the roster, though, Denver had no issues drafting the stud edge defender. With defenses forced to pay extra attention to Miller on one side, the rookie could quickly pay dividends, and a double-digit sack total is certainly possible in 2018.

Green Bay had a great draft with cornerbacks Jaire Alexander and Josh Jackson in the first two rounds while acquiring a 2019 first-round pick, and the rookie duo could instantly transform the entire defense. Both guys have the ability to take the football away similar to Buffalo’s 2017 first-round pick Tre’Davious White (who probably would have been Rookie of the Year if he played somewhere other than western New York), but Alexander has a smoother transition to the next level and also adds value in the return game. Plus, he showed up in big games for Louisville (like Jackson did for Iowa), including three forced turnovers against Deshaun Watson in 2016.

Defensive Rookie of the Year Darkhorses

It’s pretty useless to get into “winners” and “losers” before these draft classes even have their jersey numbers—let alone make their NFL debuts or have a chance to develop—but I’m not sure anyone had a better three days than the Giants and general manager Dave Gettleman. Lorenzo Carter was a first-round talent that New York was able to select at the top of the third round, and he will be the team’s most dynamic edge defender with the ability to get after the passer, pursue runners in space, and drop back in coverage. He was built for James Bettcher’s 3-4 scheme.

New England already has Stephon Gilmore, Eric Rowe, and Jason McCourty at cornerback, but they spent a second-round pick on Duke Dawson and likely expect him to contribute right away in the slot. The Florida product will allow Bill Belichick’s defense to mix and match depending on the opponent, because as we saw in Super Bowl LII, no one could defend Nelson Agholor (nine receptions for 84 yards) in the slot, including a couple big third-down conversions that would have changed the game. However, to win Rookie of the Year, Dawson will probably need a few lucky bounces that result in turnovers and a lack of production from some higher draft picks throughout the league.

In all likelihood, a first-round pick will win Defensive Rookie of the Year, as that has been the case for the past 11 years (and the last ROTY to not be a first-round pick was DeMeco Ryans, who was drafted with the first pick of the second round). However, despite being a fifth-round pick, Ogbonnia Okoronwko could have the perfect storm to put up huge numbers and shock the football world. First of all, Wade Phillips is arguably the best defensive coordinator in the league, and he is already excited about his new outside linebacker. Also, the Rams have a very thin depth chart at the position, and perhaps most importantly, they will get plenty of pressure up the middle with Aaron Donald and Ndamukong Suh, so Okoronkwo should get every opportunity to make plays in one-on-one matchups all season.