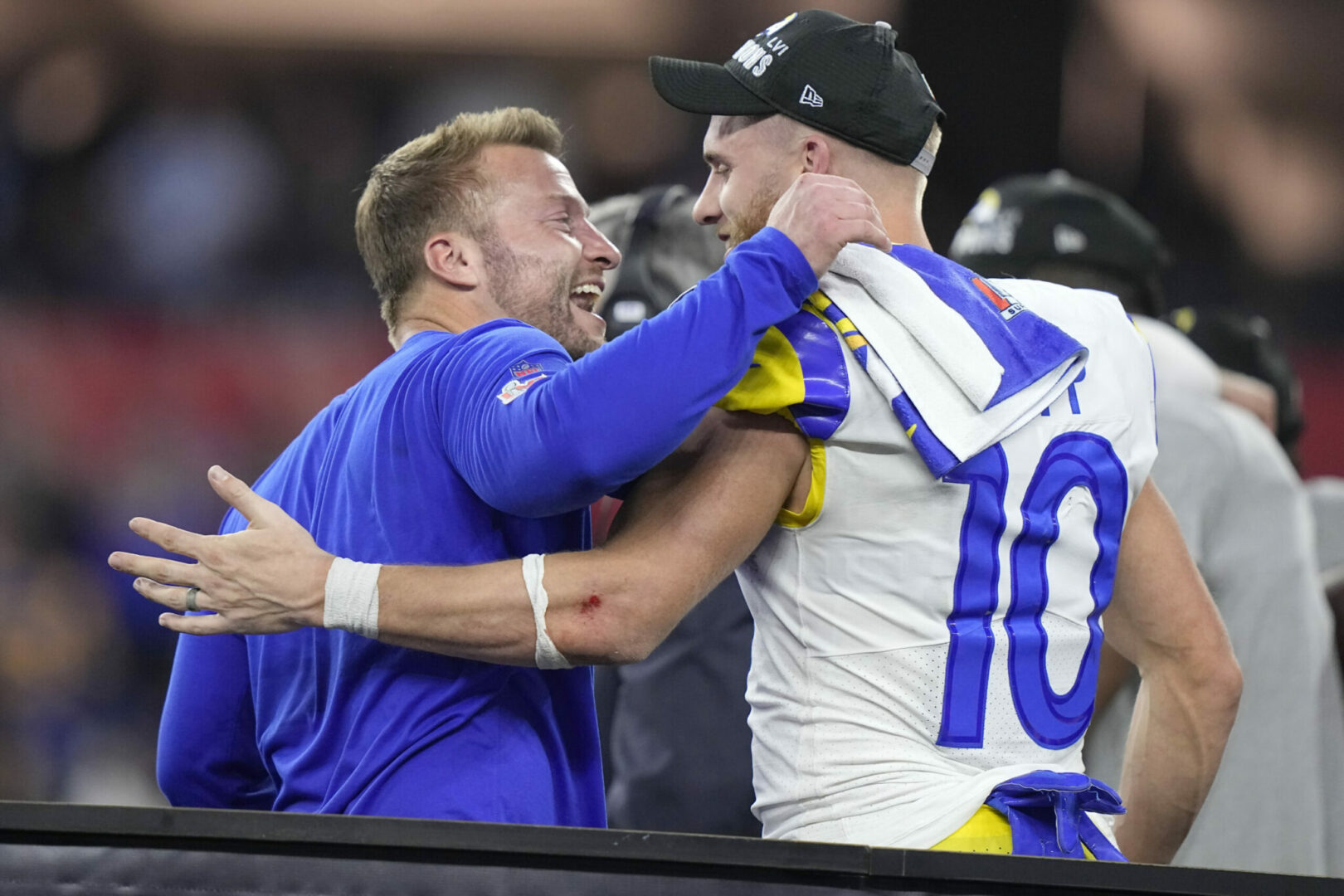 
The Rams are your Super Bowl champions, but where do all 32 teams rank from the 2021 NFL season? While the thoughts for each team will mostly be forward-looking, the rankings are based on the 2021 season alone.

There are plenty of people (just check social media and comment sections) upset with how Super Bowl LVI ended, and you can count me squarely among them. But give the Rams defense credit for steppping up in key moments at the end of the NFC title game and the Super Bowl, helping Los Angeles get another championship.

Joe Burrow, Tee Higgins, Logan Wilson and the Cincinnati squad played their hearts out in Super Bowl LVI, and it’s a shame how it ended for them. The loss might sting more for the Bengals given that you don’t know how many opportunities you’ll get as good as that to win a championship, especially playing in an AFC that looks stacked long-term.

Again, this is based on the 2021 season—not looking ahead to 2022. The Bucs have massive shoes to fill after Tom Brady’s retirement, and the quarterback spot for Tampa Bay is one of the biggest storylines of the offseason. There are still pieces in place for the Bucs to compete for a title.

The second-half collapse against the Bengals will stick with the Chiefs for a while, as this wide-open parity-filled season felt like a strong opportunity to get a second ring for the aging group.

It didn’t show with the record or a deep postseason run, but many people felt the Bills were the best team in the league this season overall. The heartbreaking overtime loss at Arrowhead certainly seemed avoidable, and the path to redemption is finding a way to win it all in the next few years.

The Jimmy Garoppolo criticism was ridiculous, but the 49ers are very excited about what third overall pick Trey Lance can do under center in Kyle Shanahan’s offense. We’ll see what compensation the Niners can get for Jimmy G via a trade.

Perhaps this is low for the top seed in the NFC playoffs, but another early exit for Aaron Rodgers (who won his fourth MVP) and the Pack made it a disappointing year overall in Green Bay. Now the Packers must find a way to keep Rodgers and Davante Adams with the franchise, which I think they’ll do.

The Titans sound committed to Ryan Tannehill as the team’s quarterback in 2022, and I believe them. One of the big keys for Tennessee next season is to keep the star players healthy, after Derrick Henry, A.J. Brown, and Julio Jones all dealt with things throughout 2021.

Despite rumblings and rumors, the Cowboys are running it back with Mike McCarthy as the head coach and Dan Quinn as the defensive coordinator. It’s the smart move after a 12-win season. Dallas should try to make sure they get CeeDee Lamb more involved on offense next year.

Josh McDaniels finally took a second head coaching job lands in a good spot with the Raiders, but he’ll need to gain the respect of the locker room after the players wanted Rich Bisaccia to remain the full-time head coach. The AFC West is an incredibly tough division, but Vegas could take a leap forward in 2022. Remember, this team came incredibly close to knocking off the Bengals in the Wild Card Round.

After getting back on track with rookie Mac Jones at quarterback, the Patriots are a team that can vault back into championship contention next season. The defense could easily be the best in the league under Bill Belichick in 2022, and New England will look to put together a second consecutive excellent offseason.

The odd vibe between the @AZCardinals and Kyler Murray is indeed alarming:
Murray is described as self-centered, immature and finger pointer, per sources.
Murray is frustrated with franchise and was embarrassed by playoff loss to Rams and thinks he’s been framed as the scapegoat

The media can perhaps blow things out of proportion at times, but I think this is a definite problem—because it’s been obvious how poor the body language for Kyler Murray has been when things haven’t gone well through his first two seasons. Hopefully it’s something Murray grows out of.

The Steelers have already been connected to just about every quarterback that might be available this offseason, including two of the top quarterbacks in this year’s draft class (Kenny Pickett and Malik Willis). The high-end talent is there for Pittsburgh, now they need to add more strength and depth throughout the roster.

Jalen Hurts underwent ankle surgery after the season, so we didn’t realize how much he was playing through down the stretch. The Eagles must add more playmakers around DeVonta Smith and Dallas Goedert to help get the most out of Hurts.

ESPN’s Chris Mortensen says the Colts are likely to trade or release Carson Wentz this offseason, which isn’t a surprise given the costly mistakes he made in 2021—but this might have been a move directed by team owner Jim Irsay. So, Indy is another team to watch in the quarterback market.

The Chargers are obviously not in the quarterback market, with superstar Justin Herbert leading the offense. The expectations will be massive for Herbert and LA in 2022.

A weakness for the Dolphins for many years has been the run game (they haven’t had a 1,000-yard rusher since Jay Ajayi in 2016), and I think new head coach Mike McDaniel will help in that department, which should help take pressure off Tua Tagovailoa and the defense. Team owner Stephen Ross is in a difficult spot after allegedly offering fired coach Brian Flores $100,000 per loss when he allegedly wanted a higher draft position.

Sean Payton’s retirement was a bit of a shocker, and he arguably leaves the franchise in not a great spot moving forward. That said, the veteran group will be looking to compete under Dennis Allen, and it helps that the NFC South looks relatively weak following Tom Brady’s retirement.

Health will be huge for the Ravens in 2022 after Lamar Jackson and a bunch of other key players missed much of last season. If I were a Ravens fan, I would be excited about the team bringing in Mike Macdonald as the new defensive coordinator to replace Wink Martindale.

Rams offensive coordinator Kevin O’Connell is officially being hired by the Vikings this week, and he should be a strong fit with Kirk Cousins. If all goes well, Minnesota has the pieces to vault back into contention.

Another potential quarterback question mark entering the offseason appears to have been answered, with the Browns committing publicly to former No. 1 pick Baker Mayfield. With the way Odell Beckham Jr. performed for the Rams during the postseason, look for Mayfield, who is undoubtedly hearing the noise, to be motivated.

The Seahawks are also going to be motivated after their first losing season under Russell Wilson, who I still do not think is going anywhere. The defense showed promise after another slow start in 2021, and it’s imperative that they find a way to not start so poorly again this fall.

If Aaron Rodgers does leave Green Bay, Denver is the logical landing spot after the Broncos hired Packers offensive coordinator Nathaniel Hackett as the head coach. An even bigger question than quarterback is the next team owner, with the Broncos now officially for sale.

Again, with the NFC South not looking that strong relatively speaking, the Falcons are a very intriguing team entering this offseason. We’ll see what they do on offense, with Calvin Ridley’s status uncertain and Cordarrelle Patterson set to hit free agency.

I’ll write Washington Football Team one final time, as they were not yet the Commanders during the 2021 season. I would have found a way to make Washington Wolves work, but I don’t think Commanders was a bad choice. Anyway, expect Washington to be extremely aggressive in the quarterback market.

Matt Eberflus is probably a good fit in Chicago given his defensive background, but the key for the Bears in 2022 and beyond will be the progression of quarterback Justin Fields.

It would not surprise me at all if the Panthers take a massive step forward next season in the third year under Matt Rhule. The defense can be among the NFL’s best, but Carolina is another squad that’s ceiling should come down to the quarterback.

Lovie Smith was a surprise hire, and while I do not think David Culley should have been fired after one season, I like the move. Smith has an above-.500 record in his career and is 3-3 in the postseason. He should be a good fit as Houston continues to build this thing.

While he’s probably happy for many of his old teammates, it must have been difficult for Jared Goff to see the Rams win it all, as he could easily have been the quarterback leading Sean McVay’s offense. The top priority for the Lions this offseason should be adding weapons on the outside for Goff.

The Jets defense needs to take a major step forward under Robert Saleh in 2022. If that side of the ball can do so, talented quarterback Zach Wilson doing the same could lead to some magic in New York.

I am very optimistic about the Giants’ chances of turning things around under the new regime, and as stated in the open, these rankings are reflective of the 2021 season. Daniel Jones should have a chance to silence his many critics if he can stay healthy in Brian Daboll’s offense.

We’ll see what happens with Trent Baalke (it looks like he’s staying), but I really like the Doug Pederson hire for the Jaguars. Trevor Lawrence should now have great structure in place to progress into an elite quarterback.