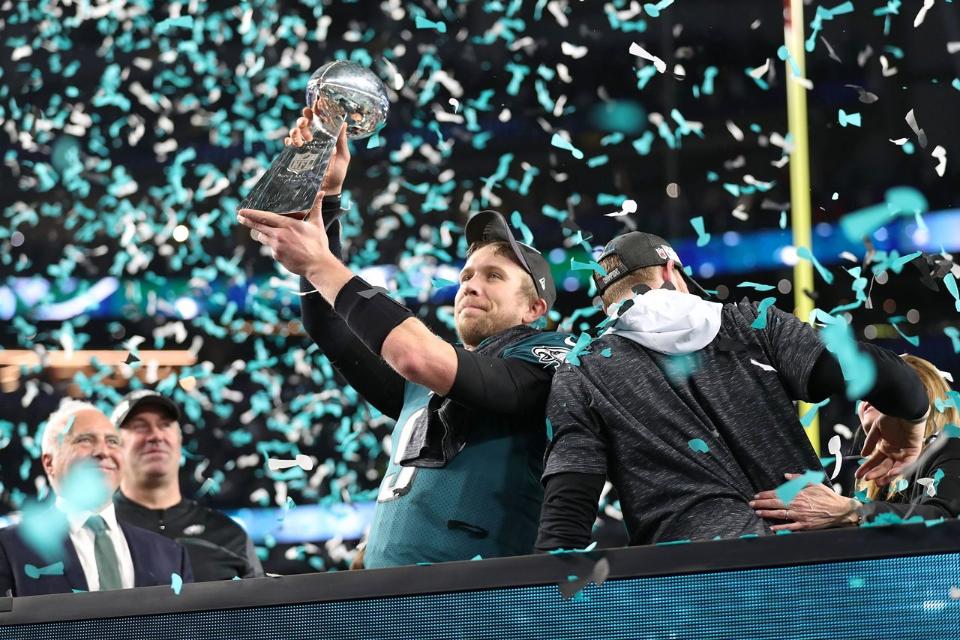 For years, the Eagles have been one of the best franchises—not only in the NFL, but all of sports—yet they didn’t have a Super Bowl to show for it. They have had some outstanding teams with great coaches like Dick Vermeil, Andy Reid, and Chip Kelly, but any talk of the Eagles being among football’s elite, top-tier franchises was always put aside with the argument of no rings.

Despite a couple of NFC championships, the 1960 NFL championship (along with 1948 and 1949) was the main source of pride fans of the team could hang their hat on, as they came up short in the Super Bowl in 1981 against the Raiders and in 2005 against the Patriots.

Philadelphia always had Brian Dawkins, and Donovan McNabb, and Reggie White, and Randall Cunningham, and many other greats. They have had their share of dominance over the division rival Cowboys, Giants, and Redskins over the years—particularly since 2001, when they have nearly as many NFC East titles (eight) as the rest of the division combined (nine). Really, they have been a bit of a “Patriots Lite” version in the NFC, with a ton of success—but it didn’t equate to a parade down Broad Street.

The Phillies’ 2008 championship, won by a beloved group led by Chase Utley, Jimmy Rollins, Ryan Howard, Cole Hamels, Carlos Ruiz, Charlie Manuel, and so many others, was always a major boost and delivered a ton of pride for the city. It was the first title since 1983, and there were times when it looked like it might be the last title in quite a while. Fans were extremely happy with its baseball team for bringing home a title, but Philadelphia and its surrounding diehard sports fans across South Jersey and the world have always had football in their blood more than anything and most craved a Lombardi Trophy more than anything else.

Doug Pederson, Nick Foles, and one of the tightest teams in the NFL finally delivered the elusive Super Bowl crown, and they snatched it from who I believe is the greatest athlete of all-time, as Tom Brady had another masterful performance in which he threw for a Super Bowl and NFL postseason record 505 passing yards, shredding one of the league’s best defenses in a legendary effort.

The Eagles defense basically made one big play the entire game, and they made it count on Brandon Graham’s strip sack that allowed them to take more time off the clock and add another three points to make it an eight-point game with not much time remaining for New England. If Graham doesn’t make that play, I have no doubt Brady would have drove the Patriots down the field for a game-winning touchdown—we’ve seen him calmly do it too many times.

And at the end of the game, with the Patriots pinned down deep, it was almost the exact opposite of Super Bowl XXXIX, when Donovan McNabb and the Philadelphia offense was pinned back with the difficult task of getting a game-tying field goal to send the game in overtime. This situation was very similar, but even more difficult, with the Patriots needing both a touchdown and two-point conversion to send the game to overtime. Brady nearly willed his team into the end zone, as the Hail Mary attempt was very close to converting, and you would expect nothing less from the G.O.A.T.—but this was the Eagles’ year.

I’ve already written about former head coach Chip Kelly’s impact on the franchise, as he put the team in a position to build the roster into one of the tightest in the NFL, and that’s what the Eagles currently are. Doug Pederson wasn’t just handed anything, though, and he had to get the job done; and after there were some obvious concerns last season after it seemed like the head coach was almost coaching at the behest of executive vice president of football operations Howie Roseman, Pederson really came into his own in his second year as the head man for the franchise.

The trick play at the end of the first half of the thrilling Super Bowl LII victory, which resulted in Nick Foles catching a touchdown from tight end Trey Burton, encapsulates Pederson as a coach. Despite what some might say, Pederson wasn’t playing with “house money” because Carson Wentz was out of the lineup and getting lucky with his aggressiveness—he’s been aggressive with his foot on the pedal all season, and I don’t think there was a better offensive play-caller in the NFL in 2017. As much as I like Chip Kelly and believe he was on the path to delivering the franchise a Super Bowl, no one can say things haven’t worked out with Pederson, who is probably the main reason owner Jeffrey Lurie was able to hoist the Lombardi Trophy for the first time.

And as for Nick Foles, not enough good things can be said about him. He’s simply a very good quarterback that knows how to play the position and gives his guys a chance to make plays—like Alshon Jeffery, Nelson Agholor, Corey Clement, and Zach Ertz did last night. To think Foles very nearly retired after his stint with the Rams and went on to win Super Bowl MVP because he kept at it is one of the best sports stories you’ll hear. The moment was never too big for him despite going up against Tom Brady and Bill Belichick, and I don’t think anyone would be opposed to a statue being built for him somewhere in Philadelphia.

While there are certainly a fair share of bandwagon fans that don’t watch every second of every game like many of us diehards do, this Super Bowl championship is great for all the people that have waited so long for it. I’m only 23, and the wait wasn’t too bad at all now that a championship has finally happened. I’m especially happy for those that had to wait two, three, and four times as long as I did.

From start to finish, the Eagles were up there with the Patriots as the clear best team in the NFL all season, but they still embraced an underdog role much like that of their beloved fictional boxer Rocky Balboa, who always had the championship spirit inside of him just waiting to be unleashed. Like Balboa, who toppled the great Apollo Creed in his second go-around and went on to defeat the likes of Clubber Lang and Ivan Drago, there could be a lot more greatness yet to come for the Eagles.

This Eagles team has dynastic qualities simply because they are such a close-knit group. They should remain championship contenders for many more years, just as they have for the better part of the last two decades. But even if this is the only Super Bowl title in the lifetime of Eagles fans, we’ll take it.

Because we know it certainly can’t be taken away.