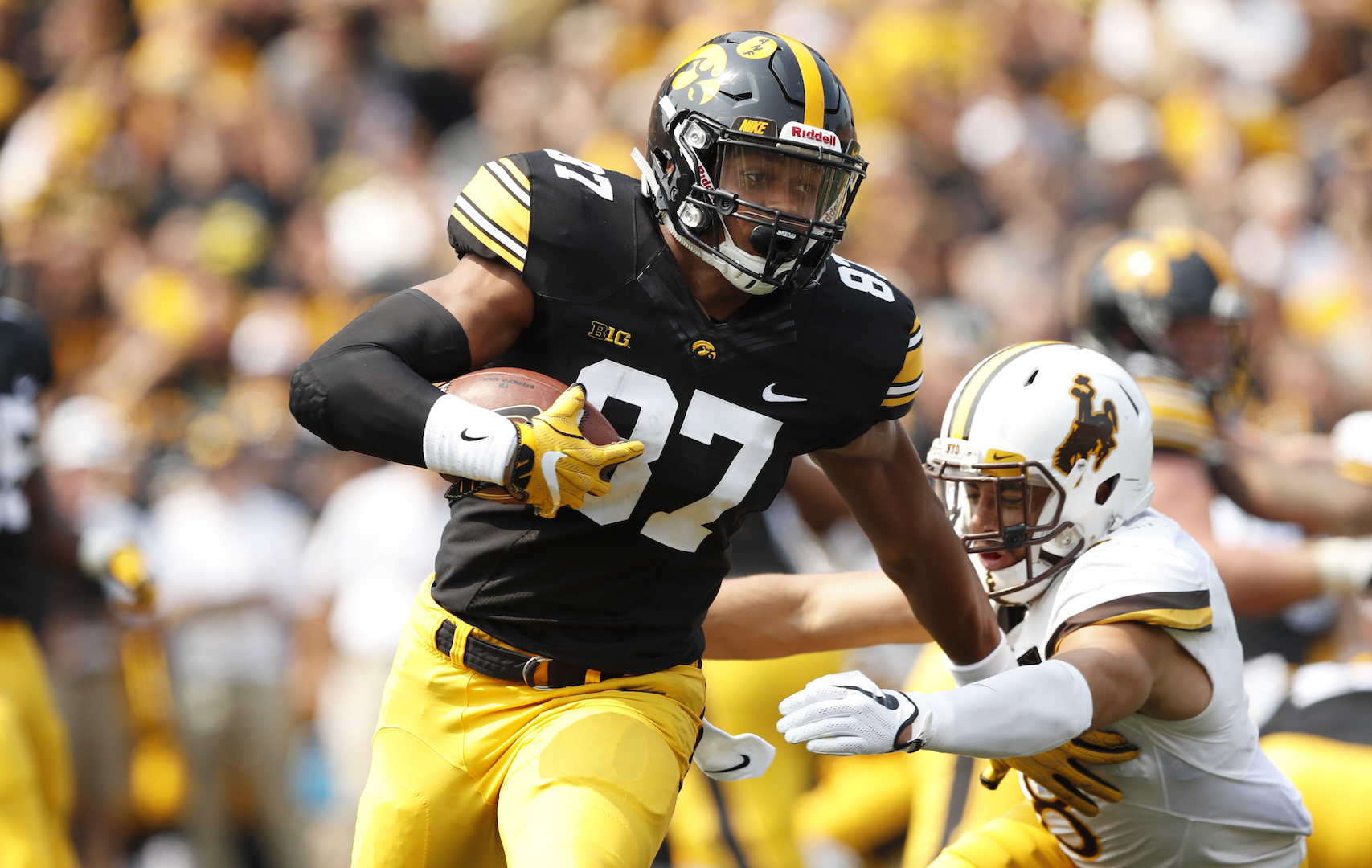 
Last week, I named 16 prospects projected to enter the 2019 NFL Draft that could potentially provide a huge boost to each AFC team this season, and now, I will do the same for the NFC. Again, this is based on 2018 impact, and there’s only one prospect per team with no repeats.

I had A.J. Brown as a perfect fit for the Bills last week, but in the NFC, he would give Dak Prescott a true No. 1 receiver that has an on-the-ground game to compliment the skillset of Dallas’ franchise quarterback. Brown could wind up as a top-five pick in 2019 if he builds on his 75/1,252/11 line from last fall.

The Giants had a tremendous draft earlier this year, including on the defensive side of the ball with outside linebacker Lorenzo Carter and defensive linemen B.J. Hill and R.J. McIntosh. However, they could still use an inside linebacker to pair with Alec Ogletree on the inside, and Josh Allen looks like an elite player at the position. I think he would dominate in James Bettcher’s 3-4 scheme.

There simply aren’t many holes on Philly’s roster heading into 2018, and since this is based on one season, it’s not worth giving them a future starter at safety or defensive end. Instead, Dexter Lawrence—my current No. 1 overall prospect—could slide right in next to Fletcher Cox on the interior to create arguably the best d-line in NFL history. The rich get richer.

Washington could surprise people this year with strong trenches on both sides of the ball, but how long will they wait for Josh Doctson to become a consistent option in the passing game? Anthony Johnson could give Alex Smith the big, possession receiver he needs alongside slot Jamison Crowder and deep threat Paul Richardson.

The Bears actually don’t have a glaring weakness with an emerging defense and a retooled offense, so Ed Oliver would be a luxury pick joining Akiem Hicks, Eddie Goldman, and Jonathan Bullard on the defensive line. Even without the dominant Oliver, Chicago could have one of the league’s best units in 2018.

Nick Bosa to the Lions is probably the best fit in this entire article, as he and Ezekiel Ansah would be an absolute terror together on the edge for Matt Patricia’s defense. Of course, like his older brother Joey Bosa, Nick will do a lot more than get to the passer at the next level.

The Packers also need an edge rusher, and Clelin Ferrell looks like the clear No. 2 in the class behind the Ohio State star. Ferrell had 9.5 sacks and 18.0 tackles for loss last year on Clemson’s stacked defensive line, and he has the length at six-foot-five to make an impact as a change-of-pace to Clay Matthews and Nick Perry.

I think the strength of the NFC is on full display compared to last week with the AFC, as there are several prospects going to teams as overkill more than filling a need. That includes Rashan Gary, who could line up all along Minnesota’s elite front to create mismatches with Everson Griffen, Danielle Hunter, Linval Joseph, and Sheldon Richardson.

Again, do the Falcons need a top-flight option at tight end? No, but adding Noah Fant to an offense that already includes two dynamic running backs and an excellent trio of wideouts headlined by Julio Jones would be unfair for opposing defensive coordinators. Fant would give Matt Ryan a target in the red zone that he hasn’t had since Tony Gonzalez, and people would certainly pay for doubling Julio.

Matt Kalil is coming off a sub-par season at left tackle, and getting a stud on the blindside would do wonders for a team that already has a really good right tackle in place with Daryl Williams. Jonah Willaims (no relation) could be a top-15 pick next year if he continues to play well in the SEC.

Another Alabama star, Anfernee Jennings would provide an immediate boost to the weakness of New Orleans’ defense in 2018, allowing Dennis Allen’s unit to get even better than it was in last year’s breakthrough season. Jennings, free-agent signing Demario Davis, and 2017 third-round pick Alex Anzalone would be a solid trio if they all stayed healthy.

On and off the field, I am not sold on Jameis Winston, so this fictional exercise could benefit the Buccaneers more than anyone by giving them a new franchise quarterback. Shea Patterson is a dual-threat that would only run when he needs to with Mike Evans, Chris Godwin, DeSean Jackson, O.J. Howard, Cameron, Brate, and Ronald Jones at his disposal.

I think 2016 third-round pick Brandon Williams might reach his potential under a new coaching staff, but the Cardinals still don’t have a conclusive answer across from Patrick Peterson at cornerback. I think Deandre Baker could be the guy as someone in the mold of Tre’Davious White and Denzel Ward as an “undersized” corner that can mirror receivers in man or zone coverage.

Outside pass rusher is really the only thing the Rams are missing, so Chase Winovich would give them a potential difference-maker by taking advantage of the interior push from Aaron Donald and company. Plus, the Michigan product would be a good compliment to rookie Ogbonnia Okoronkwo.

I don’t think San Francisco needs a running back after signing Jerick McKinnon, but this is just too good a fit not to consider. Bryce Love and McKinnon would be an excellent one-two punch, and we know Kyle Shanahan has no problem implementing a combo backfield after working wonders with Devonta Freeman and Tevin Coleman in Atlanta.

Jaquon Johnson is one of a few guys that didn’t appear in the AFC version of this article, but he could step right in to replace Kam Chancellor and/or Earl Thomas on the back end of Seattle’s defense after a standout season for the Hurricanes. Johnson is only five-foot-ten, but he led Miami in tackles last season and should be a first-round pick next year.