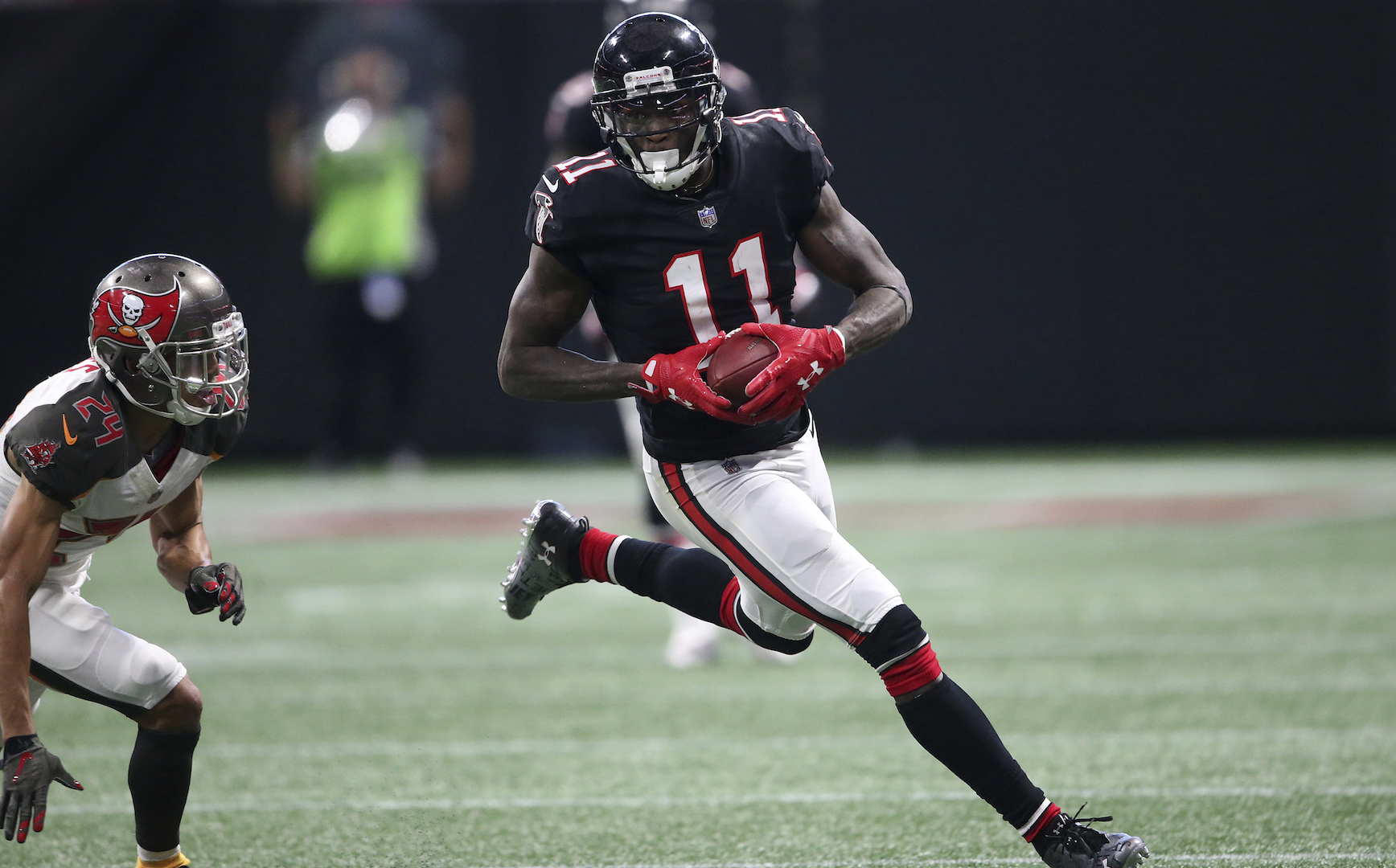 
Our countdown of the top-ten players at each position for the 2018 NFL seasons continues with wide receivers. In case you missed it:

There are over a dozen wide receiver that could have easily been in this final spot in the top ten, but the veteran Jordy Nelson is our selection. People might think that Nelson is past his prime at 33 years old, but all the talk from the people that would know indicates otherwise. Aaron Rodgers said he knows Nelson has a lot left in the tank, while Raiders head coach Jon Gruden and Raiders quarterback Derek Carr have been heaping praise on the long-time number one target for Green Bay. Nelson was leading the league in touchdowns before Rodgers’ collarbone injury last season, and he had yardage totals of 1,263, 1,314, 1,519, and 1,257 in his previous four fully-healthy seasons.

A second consecutive veteran All-Pro makes the list, as Larry Fitzgerald still gets it done at a high level despite turning 35 before the start of the season. Nelson and Fitz might not threaten the top of the yardage leaderboard in 2018, but they’ll both do everything that’s asked of them—from making the tough catch over the middle to making key blocks in the run game. It doesn’t happen often, but it’s an absolute shock when Fitzgerald drops a pass, which indicates how amazing his hands are. Fitz is going for his fourth straight season with over 100 receptions.

One of the NFL’s premier deep threats and Andrew Luck’s top target in Indianapolis, T.Y. Hilton strikes fear in opposing defenses as someone that can take the top off the defense to either get open for a long touchdown or act as a decoy to open things up for everyone else on offense. But Hilton is not just a one-trick pony, as he can run every route in the book and has a great feel for getting open again both man and zone coverages. Additionally, Hilton comes up with big plays in the tight moments late in games when his team most needs it.

Obviously, Josh Gordon, who is away from the Browns apparently to get his mind right, must return to the field if he’s going to be a top receiver in 2018; but he has truly elite talent that helped him earn First Team All-Pro honors in 2013. From a pure talent perspective, Gordon is in the discussion with anyone in the NFL. He’s basically built like an alien at six-foot-three with exceptional speed and long arms to pluck balls out of the air.

There are a lot of great receivers in the league and someone might break their way in, but the top six receivers heading into 2018 are relatively solid. After a down year in 2016, DeAndre Hopkins bounced back with 96 receptions for 1,378 yards and a league-leading 13 receiving touchdowns on his way to a First Team All-Pro selection last season. Hopkins isn’t a top-tier height-weight-speed athlete, but he can get open at every level of the field, and he has top-notch ball skills and hand-eye coordination.

A.J. Green stepped into the league as a 1,000-yard receiver after being selected with the fourth overall pick in 2011, and he’s been consistently among the league’s best every year of his career. Like Hopkins, Green has uncommon hand-eye coordination and ball skills, and his ability on the sideline is second-to-none. At six-foot-four—the tallest of any receiver in the top ten—Green still has very good quickness and can smoothly run any route.

Odell Beckhkam Jr. is a world-class talent that probably could’ve played a few different professional sports, but he opted for football and is one of the league’s best at his position. Beckham has remarkable game-breaking ability to take a quick slant and score in an instant, while also possessing the capability to run every single route at a high level, including some of the best double-moves you will ever see. Now healthy and in a new offense led by Pat Shurmur, OBJ should remain a 1,300-yard, ten-touchdown guy.

Health has unfortunately been the issue for Keenan Allen, but a fully healthy 2017 led to a huge 102-catch, 1,393-yard, six touchdown campaign for Philip Rivers’ top target. Allen doesn’t “wow” you with traditional explosive athleticism like 4.3 speed or a 40-inch vertical jump, but he has impressive craftiness and simply knows how to get open all over the field. And just because he might not test well athletically doesn’t mean he won’t make explosive plays—which he can do, especially with awesome double-moves to get open short, intermediate, and deep, along with a nasty juke move. Simply put, Allen knows how to play receiver.

The top two is razor-close and can go either way. On a weekly and yearly basis, no one puts up the statistical production of Antonio Brown, who averages an absurd 116.4 receptions, 1,569.6 yards, and 10.4 touchdowns over the last five seasons. AB has been named an All-Pro in each of those five seasons, including First Team All-Pro in each of the last four years. Brown plays much bigger than his five-foot-ten stature, making contested catches over cornerbacks without much trouble—and he very rarely drops passes. In the biggest moments, Brown shows up; and he’ll show up in 2018 as an elite player for the sixth straight season.

The ultimate team player as a wide receiver, Julio Jones does everything you want from a football player. He doesn’t complain about not getting the ball, and he impacts the game in a big way even when the ball isn’t coming his way in certain weeks. If Julio isn’t doubled, he can take over a game like no other in what’ll be a long day for your defense. Aside from his blue-chip ability as a pass-catcher and potency as a running-back like force with the ball in his hands, Jones is arguably the top run-blocking receiver in the NFL. Jones has shown he can play his best when his team needs it—including in the tough Super Bowl loss a couple of seasons ago.