Home / frontnfl / Saquon Barkley Is A Franchise-Changing NFL Prospect And Deserving Of The No. 1 Pick 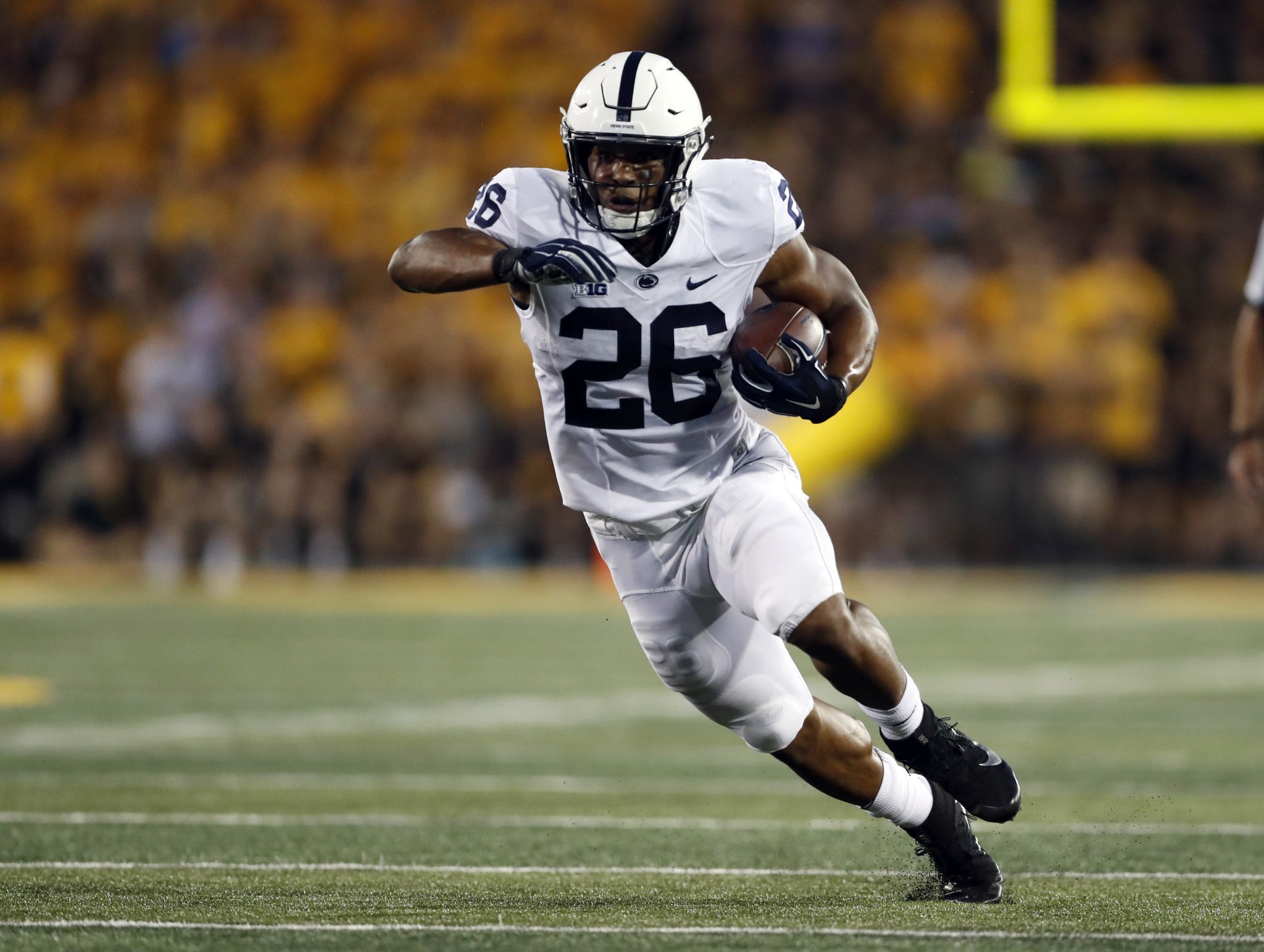 Saquon Barkley Is A Franchise-Changing NFL Prospect And Deserving Of The No. 1 Pick


It might have taken people some time to catch up and feel the same way, but most now agree that former Penn State star Saquon Barkley is the best player in the 2018 NFL Draft. All the big boards and the scouting report on Barkley we previously published explain how Barkley is basically a “perfect prospect.” Now we are going to use examples from Barkley’s time in college to show exactly why he is a perfect prospect and how his skills translate to the next level.

The electric running back on the field is almost like Bo Jackson in Tecmo Bowl—he’s just better than everyone else. As you know if you’ve watched Barkley play, or as you’ll see while reading this, Barkley has the ability to take it to the house whenever he touches the ball.

But first, we’ll go over Barkley’s ability to run the ball inside and up the middle (which often happen to turn into huge chunk runs). The one knock I hear people have on Barkley is that he’s not really a workhorse runner. They argue he’s more of an elite satellite-type of back, not someone that can be handed the ball 20-25+ times per game. I believe that is an absolutely foolish opinion on Barkley.

Against then-No. 1 ranked Ohio State in 2015, Barkley carried the ball 26 times for 194 yards. He bounced some runs outside throughout the game, but if his speed and blocking up front allows him to get to the edge, there shouldn’t be any issues with that. And when Barkley did keep his runs inside, he drove forward and picked up positive yardage.

Barkley looked a lot like Ezekiel Elliott, who was on the other side of the field during his final season with the Buckeyes. They can both bounce the run outside with their great speed and acceleration, but they run pound the rock inside to wear down defenses and hit some home runs up the middle. This run late in the game showcases Barkley’s ability as an inside runner.

There was quick feet, vision, and acceleration on the play, and he also showed his power. I’m not sure what else you could ask for from your back. Keep in mind, Barkley was a true freshman at this point.

Another unmerited criticism about Barkley is that he doesn’t do well when guys are in his face at or behind the line of scrimmage. Those that make the argument apparently did not watch him play. Just turn on some games. Throughout Barkley’s career at Penn State, there were numerous occasions of him making defenders miss in the backfield.

Here, he makes future No. 3 overall pick Joey Bosa, who was unblocked on the play, miss before also showing off his vertical with one of his amazing hurdles.

Just because Barkley has silly moves in the open field and runs uncommonly-swift for such a big guy doesn’t mean he can’t run the ball inside and carry the load in the NFL.

As a six-foot, 230-pound-plus pound guy, Barkley is also uncommonly great as a receiver. It was displayed at Penn State, but Barkley can split out wide, play from the slot, run any route from the backfield, and he has a great feel for screen passes.

Unfortunately, colleges don’t give access to All-22 tapes to show some of Barkley’s ability as a route runner from the best camera angle available, but you can get the idea about Barkley’s receiving skills from a few examples.

There are plenty of times when Barkley ran deep routes and got open for scores—whether it was in the slot, from the backfield, on a double move—but we’ll focus on this wheel route against Wisconsin. On this play, Barkley beats future first-round pick T.J. Watt, showing naturally ability to catch deep passes despite being close to the sideline.

This play does give the All-22 look because it was done during the broadcast. Barkley runs an angle route from the backfield and shows strong hands to make the catch before making defenders miss and getting the ball near the goal line. On the next play, Barkley punched it in on an inside run.

And here, Barkley shows he has a good feel for screen passes. Despite not getting great blocking, he gets past about six guys on his way to the end zone.

That play was designed for Barkley to feign a block before making himself available for the screen, but he is also an effective pass blocker when he’s asked to do that.

So we know about Barkley’s ability as an inside runner, a receiver, and a pass-protector. Now we’ll get into his home-run potential. The A+ big-play ability of Barkley has been displayed on a few of these plays, but there are many more examples.

His memorable play in the classic 2017 Rose Bowl against USC is just mind-blowing. It’s hard to think of many running backs that could do this.

That one run basically shows everything you need to know about Barkley’s ultra-elite ability as a football player. Then in last season’s bowl game, the Fiesta Bowl against Washington, Barkley had another long touchdown run.

He simply jets by the defense and glides all the way for a touchdown. If Barkley gets a crease, he’s pretty much gone. There are many more examples of long runs that could be shown, but I want to focus on this one against Iowa because it also shows his outstanding balance.

That isn’t a normal play, especially for someone that big.

Barkley’s acceleration also isn’t normal. He’s clearly very fast, but he also has a gear that only a few players have. There are many examples, but here are a couple of Barkley zooming up the sideline and into the end zone in an instant.

He destroys pursuit angles. When Barkley puts his foot into the ground, there’s a good chance he’s going to get to the pylon and into the end zone for six.

Finally, Barkley can change the game on special teams, as he is a spectacular kick returner that can either set offenses up in great field position or take it to the house. This return touchdown was on the opening kickoff against Ohio State last season in one of the biggest games of the year.

A few of these highlights were from two bowl games and some huge Big Ten games against top-level opponents. Barkley clearly shows up for big games, which is obviously exactly what you want from your best players.

We went over how great Barkley is on the field, but his refreshing attitude, unselfishness, and legendary work ethic are all also big parts of what make him who he is. I like both Josh Allen and Sam Darnold as potential franchise quarterbacks in this year’s draft, but I would have no hesitation in taking a running back as good as Barkley first overall.

Last year, Deshaun Watson was clearly the best player in the draft to me, but teams passed on him and everyone else seemed to have him outside their top-ten overall players. It’s still early in his career, but Watson looks like he’s going to live up to his potential as a franchise-changing player. This year, I feel as strong about Barkley as I did Watson.

He isn’t a quarterback, but it doesn’t matter. Saquon Barkley is one of the greatest NFL prospects of all-time, and he is someone that can you can and should want to build a franchise around.