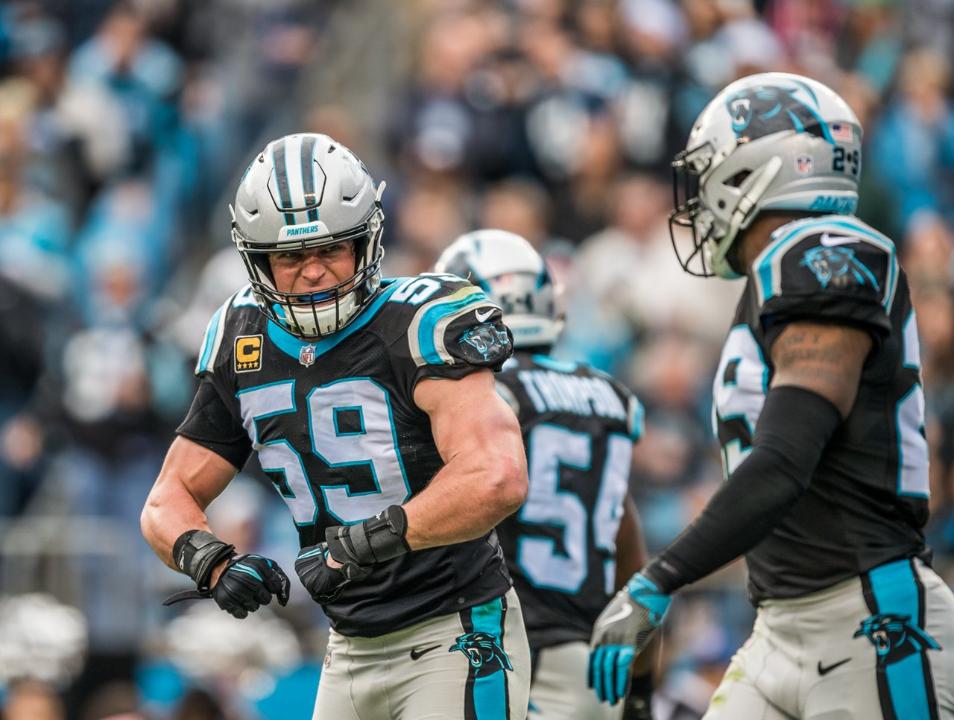 
Yesterday, we ran through the top teams in the AFC and identified the most frightening potential playoff matchup for each squad. Today we’re going to be doing the same thing for the NFC side of the bracket.  Keep in mind that I’m not talking about which team is better overall, necessarily, but simply how they match up as far as specific strengths and weaknesses—for example, I identified the Jaguars as a particularly difficult matchup for New England, but I wouldn’t go so far as to suggest that Jacksonville is a better team than the Patriots. Without further ado…

Team they should fear: LA Rams

Let’s start with the Minnesota Vikings, who look like the team to beat in the NFC now that Carson Wentz is out of the picture. The Vikings have blazed their way to the second seed in the NFC behind breakout seasons from Case Keenum and Adam Thielen, and they now appear to have a real chance of becoming the first team in league history to compete for a Super Bowl championship on their home turf. Minnesota doesn’t appear to have any major obvious flaws in its roster, which makes it hard to pick out a particularly scary matchup for them; but if there’s any team that should keep them up at night, it’s probably the Los Angeles Rams.

That choice might be a surprise to anyone who saw these two squads go head to head back in Week 11, when the Vikings prevailed, 24-7. That was LA’s worst offensive showing of the season, in large part because they couldn’t stay on schedule—they managed just 45 rushing yards, went 3-for-11 on third down conversions, and ended up possessing the ball for just over 22 minutes of game time. That was an anomalous performance by the Rams offense, and I wouldn’t count on them turning in another dud like that considering how good they have been for most of the season.

On the other side of the ball, Los Angeles matches up well against Minnesota’s biggest strength and is well equipped to take advantage of their biggest weakness. The Vikings offense has been surprisingly efficient this year, but that’s mostly a case of a very good passing game propping up a mediocre rushing attack—Minnesota ranks just 18th in the league in rushing DVOA. That pretty well mirrors the Rams, who boast the league’s third best pass defense but slot in 18th against the run (again, I’m going by DVOA here). And while Minnesota’s offensive line took a big step forward this season, they’ve still done a subpar job of protecting Case Keenum—the Vikings allow pressure on 35.9% of their passing plays, the fourth-worst mark in football. That’s bad news against a Rams front seven that features Aaron Donald, Robert Quinn and Connor Barwin.

Team they should fear: Carolina Panthers

After scuffling through one of the worst rookie seasons ever by a quarterback, Jared Goff has enjoyed a stunning turnaround in his second season in the league. Part of that is a natural byproduct of Goff escaping the soul-sucking swamp of mediocrity that is a Jeff Fisher offense (please, NFL teams who will be looking for a new coach this offseason: DO NOT HIRE JEFF FISHER), but much of the credit should also go to LA’s current head coach Sean McVay, who has done a fantastic job in his first season as head coach despite looking like he needs a permission slip from his parents to stay out for primetime games. The new-look offense McVay installed focuses on making things as simple as possible for his quarterback, emphasizing pass plays with easy reads and quick-developing routes, and a huge component in Goff’s success has been frequent use of playfakes. The Rams have used play-action on 28% of their offensive plays this year, the most of any team in football (and a stark contrast from their offensive scheme last year under Fisher, which ranked 26th in the league in play action usage), and they’ve averaged 9.3 yards per play on those play action concepts, second only to Washington. It’s not an exaggeration to say that those play-fakes have been the lifeblood of McVay’s offense.

Enter the Carolina Panthers, who have chewed up play action passes like few other defenses in football. The Panthers allow just 5.5 yards per play against play action, (just one-tenth of a yard behind Washington’s league-leading mark), largely thanks to a savvy, uber-athletic linebacking corps anchored by Luke Kuechly. The Panthers are well equipped to smother the play-fakes that fuel LA’s offense and force the Rams into a more conventional passing approach. And when they do, look out…Carolina’s defense gets pressure on 33.1% of opposing pass plays, the sixth best mark in the league. Put this defense on the field against LA and we might see the 2016 version of Jared Goff make a surprise reappearance.

Team they should fear: Carolina Panthers

If we’re being honest, Philadelphia’s Super Bowl hopes probably evaporated the moment Carson Wentz’s ACL gave out against the Rams in Week 14. The Eagles passer was well on his way to running away with the MVP award (even after missing the last two weeks, he still leads the league in touchdown passes), and the drop off from Wentz to backup Nick Foles so far looks precipitous—the once-unstoppable Eagles offense was held to a paltry 10 points and 216 total yards last week against an Oakland defense that ranks 26th in DVOA.

If a path to a championship still exists for the Eagles, it will revolve around making things as easy for Foles as possible. Foles is one of the worst quarterbacks in the league when he’s under pressure—in 2015, the last year when he got extensive playing time, he ranked 35th out of 37 qualifying passers in DVOA when pressured. Keeping the pocket clean for Foles should be Philadelphia’s top priority on offense…but unfortunately, they haven’t done that very well this season. The Eagles’ offensive line has sorely missed injured left tackle Jason Peters, to the tune of a 35.8% pressure rate on pass plays that stands as the fourth-worst mark in football. Their best bet is to lean heavily on the run game and play action to slow down opposing rushers. And if they end up running into the Panthers…well, good luck with that.

We already talked in depth about the Panthers defense, and most of the points that I made in the Rams section apply here too—Carolina’s defense has posted the best pressure rate and best numbers against play action of any NFC playoff squad, which would be just as worrisome for the Eagles’ offense as for the Rams’, if not more so. On top of that, the Panthers defense currently sits at sixth in DVOA against the run. It’s hard to imagine Philadelphia crafting a gameplan to beat the Panthers that would take the onus off of Foles; it’s even harder to imagine Foles putting the team on his back to conjure up a playoff victory.

As you can probably tell by now, I’m somewhat bullish on the Panthers’ playoff prospects this season. They haven’t been dominant in one particular facet of the game, but they are a well-rounded team who don’t appear to have any major weaknesses. The fact that their defense is so good against play action passes is crucial in an NFC playoff field where the likely top three seeded teams—Philly, LA and Minnesota—all use play-fakes as a staple of their offensive scheme. Their running game has gotten better and better as the season has progressed, and Cam Newton has overcome some early season streakiness to deliver a solid 2017 campaign (albeit still a couple of notches below his MVP performance in 2015). As far as I can tell, there’s only one thing that Carolina has really done badly this season, and that is play the New Orleans Saints.

In their two games against the Saints, Carolina was outscored 65-34 in a pair of defeats; their other two losses (to the Bears and the pre-Wentz-injury Eagles) were by a combined 8 points. There are a variety of reasons for that, but the biggest one is New Orleans’ ground game—Carolina allowed 149 rushing yards in their first meeting and 148 in the rematch. For reference, no other team has gained more than 120 yards on the ground against the Panthers all season. That’s a huge problem for the Panthers, who rely on their generally rock-solid run defense to set up second- and third-and-long situations that open the door for their pass rush. When a team gets it going on the ground against them, as the Saints did in both of their matchups, those situations disappear. On the other side of the ball, the New Orleans defense has posted the league’s fifth best DVOA against shotgun plays—that’s worrisome as well for the Panthers, who have run over 72% of their plays out of the shotgun this season.

On the other hand, Panthers fans can take comfort in the fact that losing to a team twice in the regular season doesn’t always portend doom if the two teams meet again in the playoffs. Since 1990, 16 teams have met a division rival in the playoffs after losing to them twice in the regular season, and five of those teams went on to win the postseason rematch. That’s not a great track record, but it’s at least better than you might expect.

Team they should fear: Minnesota Vikings

For the Saints offense in 2017, the name of the game is balance. After years and years of asking Drew Brees to carry the franchise on his own, New Orleans has finally sought to diversify this season, and the results have been impressive. Led by the two-headed monster of Mark Ingram and rookie sensation Alvin Kamara, the Saints’ long-dormant running game has climbed all the way to second in the NFL in DVOA. And don’t be fooled into thinking the passing game has faltered—while Brees’ raw numbers in 2017 pale in comparison to his peak years as a result of his reduced workload, he has been every bit as effective when he does throw.

The Saints’ offense does everything well, so to beat them you need to have a defense that does everything well. That perfectly describes the Vikings, the only defense in football that ranks in the top five in DVOA against both the run and the pass. They’ve also been the league’s third best defense against tight ends, second best against receiving backs, and ninth best at putting pressure on opposing quarterbacks. Whatever you want to do on offense, Minnesota’s D will have the answer.

And when Minnesota has possession, I’d be worried about how New Orleans matches up against the Viking receivers. The Saints’ pass defense has been much better than expected this season, but they are pretty thin in the secondary beyond Defensive Rookie of the Year candidate Marshon Lattimore, and Lattimore can’t cover Adam Thielen and Stefon Diggs at the same time.