Home / frontnfl / Top Prospects To Watch At The 2019 Senior Bowl 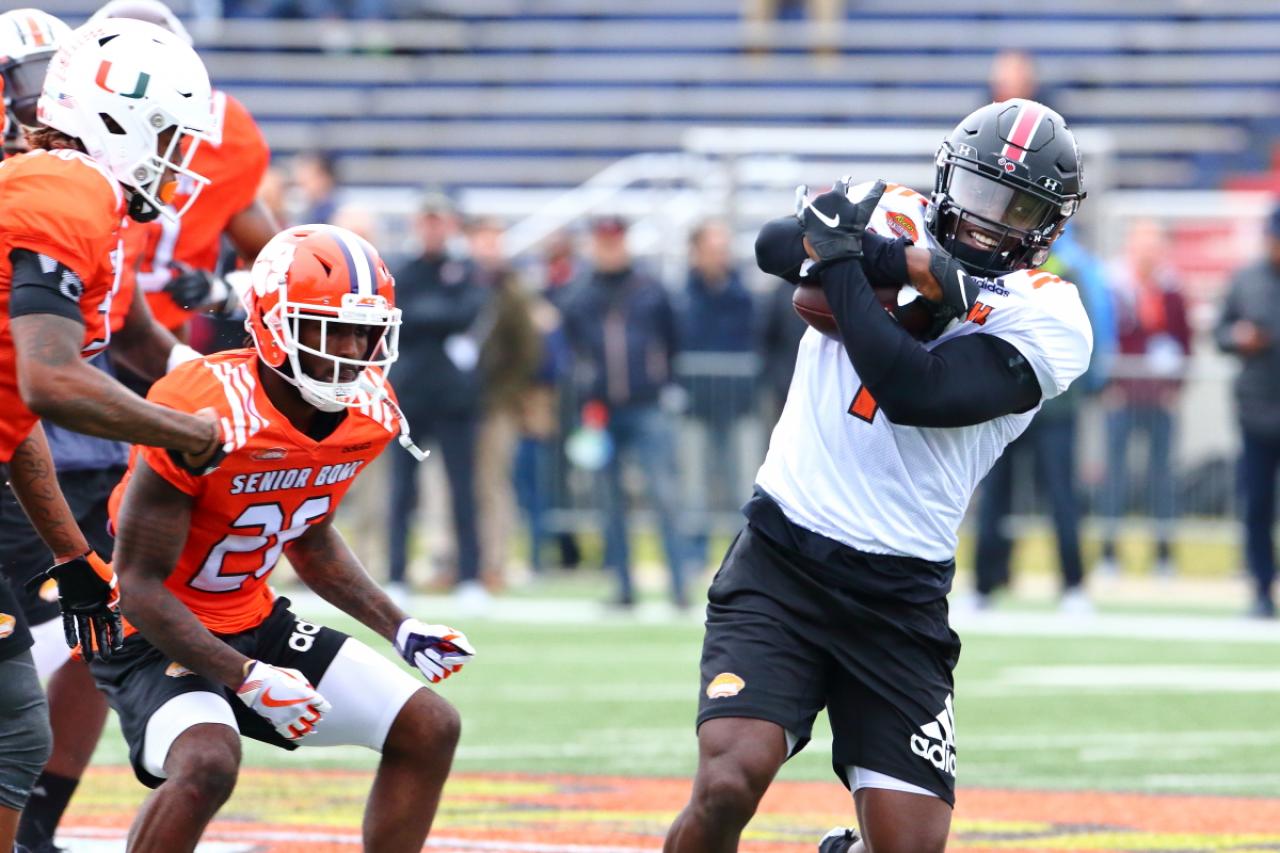 Top Prospects To Watch At The 2019 Senior Bowl


The 2019 Reese’s Senior Bowl kicks off tomorrow at 2:30 PM ET on NFL Network, and it’s worth watching for anyone interested in the NFL Draft, as the top seniors in the nation will suit up for one more game before turning pro. Everyone is worth keeping an eye on, but these are the prospects I’m looking at in particular. [Note: the jersey number for each player is listed in parenthesis]

Based on practice, the most impressive quarterback of the week was probably Drew Lock, but that shouldn’t come as a surprise considering his arm strength stands out in a controlled setting. All the signal-callers will only get about a quarter each for the game, so Lock will look to put on a show and put himself in the Day 1 conversation with Dwayne Haskins and Kyler Murray.

People are fooling themselves if they write off Trace McSorley based on three practices in which he sailed some passes. The all-time winningest quarterback in Penn State history is a straight-up gamer, and I expect him to be at his best with the bullets flying against a tough South Team defense. Don’t be surprised if McSorley follows a similar path to Dak Prescott—a former Senior Bowl MVP—as a Day 3 pick that quickly emerges as a solid NFL starter if the opportunity presents itself.

In terms of creating separation in one-on-one coverage, Andy Isabella struggled a bit in practice this week, but I think he was simply trying to do too much by displaying his fancy footwork instead of being decisive at the top of routes. It doesn’t take long to recognize the talent, though, and Isabella (along with Georgia State’s Penny Hart) have caught the attention of North Team head coach Jon Gruden. Both receivers are dynamic weapons out of the slot.

Gruden is as competitive as anyone, so as an offensive guy, it should be telling that he closed Thursday’s practice by subbing in Chuma Edoga at left tackle to take a one-on-one rep in the rubber match of a competition against the defensive line. Edoga easily kept the pocket clean, and he looks like a natural blindside protector despite playing right tackle for the Trojans.

Besides Montez Sweat on the South Team, the top edge defenders coming into the week (namely Zach Allen, Oshane Ximines, and Jaylon Ferguson) didn’t really do much to distance themselves from the rest of the pack. Fortunately, the game should play to Allen’s strength as a power rusher that wins with effort, so keep an eye on him in the trenches.

Perhaps the single most impressive thing I saw in practice this week was Germaine Pratt sprinting down the sideline to chase a runner and lightly shove him out of bounds before the goal line. The NC State product was basically out of the play, but showed absolute maximum effort to record the fastest speed of Thursday’s practice—which should have caught the attention of coaches and scouts.

Overall, it has been a good week for most of the top cornerbacks at Mobile, and that includes Iman “Biggie” Marshall. The former five-star recruit didn’t reach his full potential at USC, but over the past three days, he stayed right on the hip of receivers in man-to-man coverage. It will be fun to see him compete in live action against an unfamiliar group of wideouts.

I already had Darnell Savage as a top-50 prospect a couple weeks ago, and he’s once again proven that his game matches his name by being named to the all-practice team by Senior Bowl Executive Director Jim Nagy, which is notable because only one defensive back was chosen from a loaded group. Savage brings physicality in the box, but can also defend the slot.

Auburn had a season to forget in 2018, but Jarrett Stidham finished his college career on a high note with 373 yards and five touchdowns against Purdue in the Music City Bowl—and he could have done a lot more damage if the Tigers didn’t lead 56-7 at halftime. Stidham throws as good a ball as any of the senior quarterbacks, and he could make a statement on Saturday.

South Jersey native Ryquell Armstead is a downhill, one-cut back that runs with power in the open field, and he and the other prospects at his position will look to make an impact in the actual game after mostly going through the motions during practice. Armstead is a good enough athlete that Temple had a package for him to spy the quarterback on defense, but he’s undoubtedly a running back that should draw mid-round consideration.

Arguably the best overall player of the week, Deebo Samuel has shown explosiveness and competitiveness in one-on-one drills, doing whatever it takes to make a play. The South Carolina standout should be a stud at the next level if his ability to beat press coverage and track the ball downfield carries over to the game, as he routinely beat the South Team corners in practice.

A lot of the defensive tackles wanted to continually go to the bull rush in practice, but Elgton Jenkins was having none of it on the interior. Jenkins—who also played tackle and guard before kicking to the pivot for 26 games over the past two years for the Bullgods—shouldn’t be overlooked in a strong class.

Jenkins’ teammate at Mississippi State, Montez Sweat has a good chance to be the top player drafted from this year’s Senior Bowl based on what he’s done against other quality draft prospects. At a long six-foot-six, the 22-year-old has simply been a cut above the rest of the edge defenders this week, and it wouldn’t be a surprise to see him rise all the way towards the top ten by the end of the pre-draft process.

I had Daylon Mack on last week’s list of players to watch in the East-West Shrine Game, and he took full advantage of the opportunity, parlaying it into a Senior Bowl appearance. Even against fresher (and better) competition, Mack continues to play relentlessly on the inside—even going without a jersey after it was ripped off yesterday.

The most fun battle of the week was between Deebo Samuel and Rock Ya-Sin, as they basically cancelled each other out in the drills. Ya-Sin has extremely fluid hips that allows him to get away with some unorthodox technique at times, but I don’t think it’s necessarily a negative because of how confident he is in man-to-man coverage.

The South Team defense should be a force with Montez Sweat getting after the quarterback, Rock Ya-Sin taking away one side of the field, and Jaquan Johnson controlling everything at safety. I have the former Miami star as a top-15 prospect, as he can make plays all over the field thanks to his all-around skillset and elite intelligence.