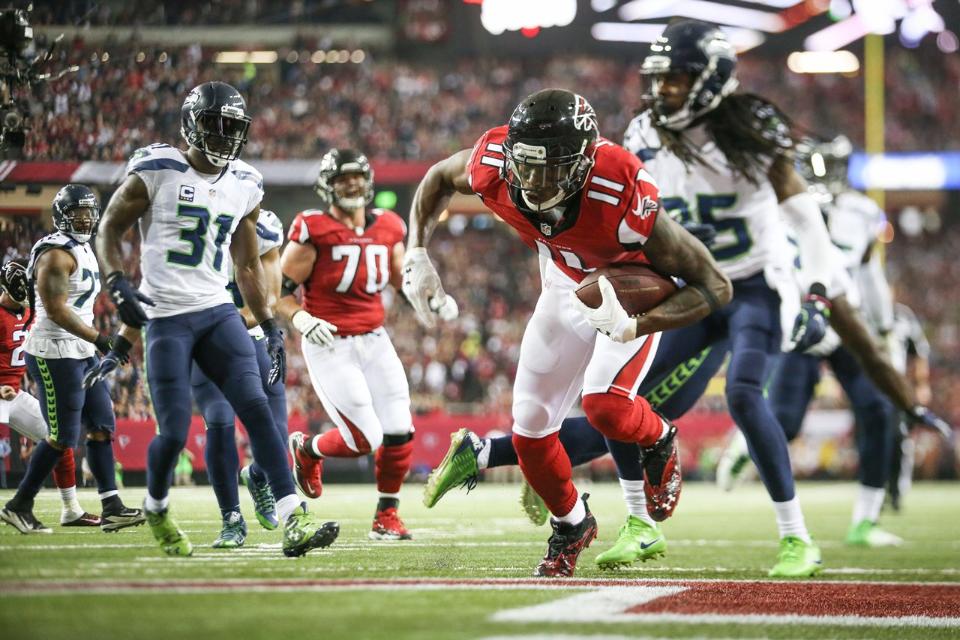 
The top receiver debate is always one of the most intense in sports, and with so many top playmakers in the NFL, it was difficult to even come up with the ten best. Feel free to list your top ten in the comments. If you missed our 2017 Quarterback and Running Back rankings, you can read them, too. [Note: these are NOT fantasy football rankings]

The top spot here is probably the most difficult decision in the history of Top Ten Tuesday, but because we aren’t doing ties, Julio gets the slight advantage. Both players get tons of attention from opposing defenses and still produce with coverage all over them, but Jones gets the nod as #1 because he is a better blocker and a no-maintenance superstar.

That is not to say that Brown is high-maintenance, as he had one Facebook Live incident last season, but the Steelers should have no worries about his character; AB is one of the hardest-working players in the NFL, and it shows on Sundays when he consistently beats the defense. The past four catches/yards/touchdowns lines for Brown (from earliest to most recent) are 110/1,499/8, 129/1,698/13, 136/1,834/10, and 106/1,284/12.

Jordy missed all of the 2015 season with a torn ACL, but he is still among the league-leaders in touchdown catches since 2011. The only wide receiver with more touchdowns than Nelson (57) since then is Dez Bryant (61), who has played nine more games over that span. Jordy just caught 97 passes for 1,257 yards and an NFL-high 14 touchdowns coming off a significant knee injury, and he could be even better if he gets his vertical game all the way back.

Speaking of vertical games, it will be really fun to see what kind of season Brandin Cooks can have with Tom Brady and the Patriots. The last time Brady had a weapon on the outside like Cooks was Randy Moss in 2007, when the two connected for a touchdown 23 times. The newest Patriot can also run underneath and do damage after the catch, so New England’s offensive will be impossible to predict. Defensive coordinators will probably be staying up late every week with Cooks and Rob Gronkowski on the same offense.

This might seem high for a guy that has totaled 153 catches, 2,459 yards, and 17 touchdowns in his three years in the league, but Sammy Watkins is a premier talent when he’s on the field. The Clemson product has battled foot injuries throughout his professional career, but he has the speed, quickness, hands, route-running ability, and size to hopefully prove the Bills didn’t make a mistake trading up for him in 2014.

We said Julio occupies the top spot because he is a no-maintenance superstar, and Odell Beckham Jr. is the complete opposite. For all his talent on the field, OBJ still has a lot of maturing to do, like not showing up his quarterback for a bad throw, not getting into an altercation with a kicking net, not punching a hole into the wall after a loss, and not taking a boat trip down to Miami before a playoff game. We are taking everything into account with these rankings. Beckham can score from anywhere on the field, but his immense talent might be a little overblown based on one catch.

The only guy to be targeted more than Beckham last season was Mike Evans, whom Jameis Winston targeted 175 times for 96 catches, 1,321 yards, and 12 touchdowns. Evans can convert in the red zone and on third down as good as anyone in the league, and he will get some more help with DeSean Jackson, Chris Godwin, and O.J. Howard being added to the offense this offseason.

Andrew Luck’s favorite target led the NFL in receiving last season with 1,448 yards, and was the league’s premier deep threat with 28 catches of 20+ yards. T.Y. is far from a one-trick pony, though, as he led the AFC in first downs. Luck clearly relies on his speedy receiver when it matters the most.

Amari Cooper has been solid in his two seasons in the league, but we are still waiting for a real breakout from him. Derek Carr shifting some of his trust from Michael Crabtree to Cooper would make the former Alabama star a truly elite wideout, which could happen as soon as 2017. Cooper won’t turn 23 until the middle of June.