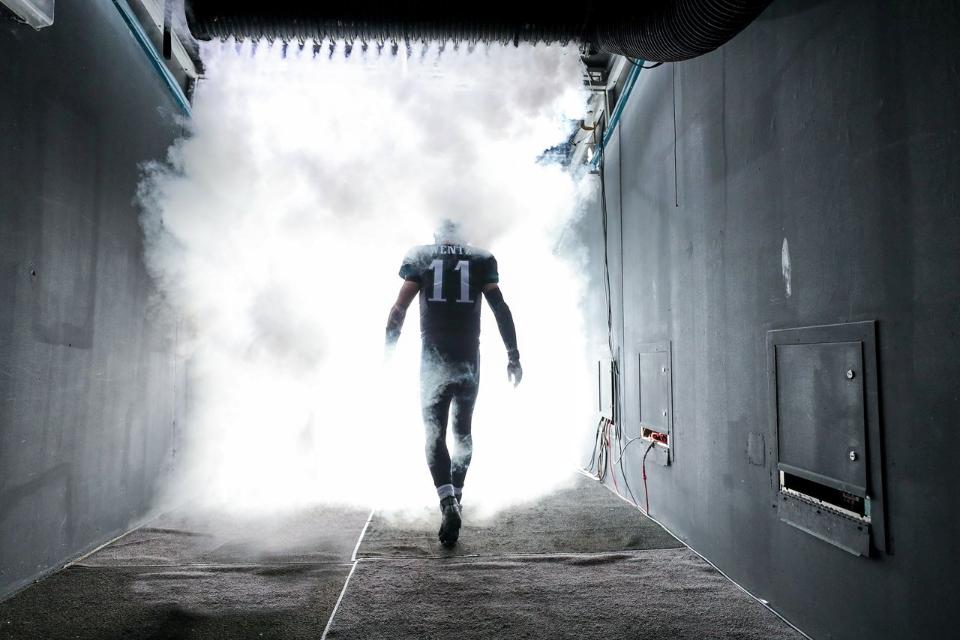 For weeks, this has been a Thursday Night Football game that I’ve been excited about, and it could be a playoff preview between Tennessee and Pittsburgh. The Titans started off 2-3 this season, but they have won four straight and are 6-1 when Marcus Mariota starts and finishes the game. The third-year quarterback hasn’t done much damage with his legs because of injuries, but I think he might be unleashed in a pivotal AFC matchup. Opposing him, Ben Roethlisberger hasn’t been great this season, but he seems to always have a big game in primetime, and the Pittsburgh offense is significantly better at home than on the road. Look for Big Ben to employ a no-huddle attack to put the pressure on Dick LeBeau’s defense.

The Lions should be focused against the division-rival Bears this week, as a win combined with a Minnesota loss would set up a matchup with the Vikings on Thanksgiving for first place in the NFC North. Despite being on the ropes against Cleveland last week, Detroit has beaten teams they should over the past two years for the most part, but Chicago was one to give them trouble in 2016. In their first meeting, the Lions won 17-14, but the Matt Barkley-led Bears came out on top in December with a 20-17 win, which really hampered Jim Caldwell’s squad in the division race. They need to contain Jordan Howard and the running game to avoid the same fate as a year ago.

It hasn’t translated to wins, but if you ask Lions’ All-Pro safety Glover Quin, the Browns probably have more athletes than 25 teams in the league. Quin said after their matchup last week, “They’ve got a lot of first-round picks. They’ve got talent… Don’t sleep on them.” And Jim Caldwell added, “That team has players.” I’m not sure I would say they have top-end talent up-and-down the 53-man roster, but the new regime has definitely done a nice job drafting over the past two years in my opinion (besides their quarterback decisions in the 2017 NFL Draft, but Hue Jackson might have more of a say at that position). If I’m owner Jimmy Haslam, I would go after Chip Kelly and draft Penn State’s Saquon Barkley first overall in 2018. Considering the potential available quarterbacks next offseason (NFL: Alex Smith, Sam Bradford, Teddy Bridgewater; CFB: Lamar Jackson, Sam Darnold, Josh Allen, etc.), the Browns could turn things around, and fast. I hope they can avoid 0-16 this season—and this might be their best chance with the warm-weather Jags coming to town in a possible snow game—but I like Jacksonville.

The Week 11 NFL schedule is top heavy with the three primetime games and Rams-Vikings, but this matchup is one of a few others that features matchups between aspiring playoff teams. The Packers sealed a huge win last week over Chicago with a dime from Brett Hundley, and the 24-year-old quarterback’s confidence should as high as it’s been as a pro with the tough Baltimore defense coming to town. A win on Sunday could see the Packers right in the playoff race and in control of the second wild-card spot, but the same is true for the 4-5 Ravens. Aaron Jones (knee) is already out for Green Bay, and it looks like Ty Montgomery (ribs) is a longshot to play, so a lot will be on Hundley’s shoulders. I like Baltimore off the bye.

There might not be two teams with more impactful injuries this season than the Cardinals and Texans, as Arizona lost offensive centerpiece David Johnson and their signal-caller Carson Palmer, while Houston lost three-time NFL Defensive Player of the Year J.J. Watt, emerging star Deshaun Watson, and a top pass rusher in Whitney Mercilus. I’m not sure Bill O’Brien can coach his way to a playoff run, but Bruce Arians’ club still has a shot if they can win some close games and get Palmer back. This week, I think the Cardinals matchup well with the Texans, as Patrick Peterson should be able to take away DeAndre Hopkins, and Blaine Gabbert probably gives them the edge at quarterback over Tom Savage.

Miami entered a three-game stretch of primetime games at 4-2, but they were outscored 109-48 (20.3 points per game) by the Ravens, Raiders, and Panthers in three-straight losses. The Dolphins are two 17-point comebacks away from being 2-7, but Adam Gase is a good enough coach to make a run like they did in 2016. Facing Ryan Fitzpatrick and a dormant Tampa Bay offense should allow things to get straightened out defensively, and Kenyan Drake has followed his blocks better than Jay Ajayi did, leading to some big plays over the past couple weeks. Look for DeVante Parker to have a monster day in a win.

It’s amazing that 2016 teammates Jared Goff and Case Keenum are facing each other this week as red-hot starters on two top NFC teams, but it goes to show that the supporting cast around a quarterback (including coaching) matters more than any other position in sports. As I’ve said before, media members and fans alike should take everything into account before recklessly labeling someone a “bust.” Jared Goff is leading the NFL’s highest-scoring offense into a difficult road matchup this week, but the Rams are undefeated away from home, including wins over the Jaguars and Cowboys, while Case Keenum has played well enough to keep franchise quarterback Teddy Bridgewater on the sidelines for at least one more week. This is a complete toss up, but I’ll take Keenum against his former team.

It’s difficult to imagine things getting any worse for New York, but it sounds like head coach Ben McAdoo will finish out the rest of the season unless things really go off the rails. With the blatant lack of effort displayed by the Giants—particularly when it comes to tackling—over the past couple weeks, they might not come close to winning again all year, which would make for an interesting choice near the top of the draft next spring in a loaded quarterback class, as Eli Manning turns 37 in January. I don’t think anyone sees them upsetting a rested Andy Reid team on Sunday.

The Saints are the hottest team in the NFL with seven-straight wins (tied with the Eagles), and they have the third-best point differential in the league at +103, which only trails Philadelphia (+104) and the Rams (+134). Drew Brees isn’t even on pace for his usual 4,800+ yards and 32+ touchdowns because the defense has stepped up and the offense is more balanced, as Mark Ingram has proven to be one of the most well-rounded backs around, and Alvin Kamara is an excellent change-of-pace option. If Sean Payton and Brees can get home-field advantage in the NFC, I don’t see how they aren’t the favorites to reach the Super Bowl. First, they need to defend their home turf against the Redskins, but for as good a job as Jay Gruden has done with his injury-plagued squad, Washington just has too many holes on the roster to turn into a contender.

A quarterback change had ignorance at an all-time high yesterday on Twitter, as race-baiters claimed the move had to do with skin color, which is just so absurd that I don’t know why I’m even mentioning it. I like Tyrod Taylor, and think he’s clearly one of the 32 best quarterbacks in the NFL, but he was a holdover from a previous regime; handpicked by new management in April, Nathan Peterman fits the offense better, and Sean McDermott feels he gives them the best chance to earn a postseason berth. The defense needs to be better after getting gashed by New Orleans last week, and I think Los Angeles should feed Melvin Gordon like the Saints did Mark Ingram. Despite the various ways they’ve lost this season, a win for the Chargers would put them right in the wild-card race.

The winner of this game would also be in contention for a playoff spot, but I wouldn’t feel confident about it. Cincinnati is probably the most dysfunctional but semi-successful team this millennium, and the dysfunction has increased as they lose more games. Two weeks ago, A.J. Green was ejected. Last week, Vontaze Burfict was ejected. And yesterday, Marvin Lewis called out first-round pick John Ross for not running a route by saying, “He let his teammates down. He let me down. He let Andy (Dalton) down.” The Broncos should view Sunday’s game as an opportunity to turn things around, and they need to sure up the special teams and not let A.J. Green or Joe Mixon make a big play.

The Raiders will play for the second-straight season in Mexico City, and it was almost exactly one year ago from Sunday that they defeated the Texans 27-20 with a late touchdown pass from Derek Carr to Amari Cooper south of the border. This could by a little bit like a Thursday night or London game in terms of unpredictability, but New England has prepared by staying on the road after their win against the Broncos last week, which they partly did because of the elevation in Mexico City, which is approximately. 7,200 feet above sea level, or about 2,000 feet higher than it was last week in Denver. Even if the game was played at the top of a mountain, I don’t see how Oakland will be able to stop Tom Brady from marching up-and-down the field with Brandin Cooks, Rob Gronkowski, and others at his disposal.

Cowboys left tackle Tyron Smith isn’t going to play on Sunday night, so that just about ends any hopes of a classic game between these NFC East foes. If Dallas is going to upset the 8-1 Eagles, they need to give Chaz Green or Byron Bell plenty of help on the blindside and hope Dak Prescott can pull a rabbit out of his hat offensively; on defense, they need to stop the run (without Sean Lee) on early downs and get pressure with four in predictable passing situations. Unless they give Carson Wentz some really exotic coverages that force him to make two or three mistakes, I don’t see any way for Dallas to avoid 5-5, meaning the division is all but decided before Thanksgiving.

Atlanta and Seattle split two matchups last season, as the Seahawks won in the regular season because of an awful non-call on a jump ball to Julio Jones, but the Falcons were able to top them 36-20 in the postseason on their way to Super Bowl LI. Tevin Coleman, who will get the start at running back with Devonta Freeman (concussion) not expected to play, turned 14 touches into 79 yards and a touchdown in the playoff matchup, and he should provide a home-run threat in the backfield if Steve Sarkisian can call a good game. Atlanta’s offensive coordinator should also take advantage of Julio Jones against the Legion of Boom without Richard Sherman for the first time ever. Russell Wilson has proven to be an elite, championship quarterback, and I think he will embrace the challenge of putting the team on his shoulders down the stretch of the regular season and probably into January, but I like the Falcons for this week.