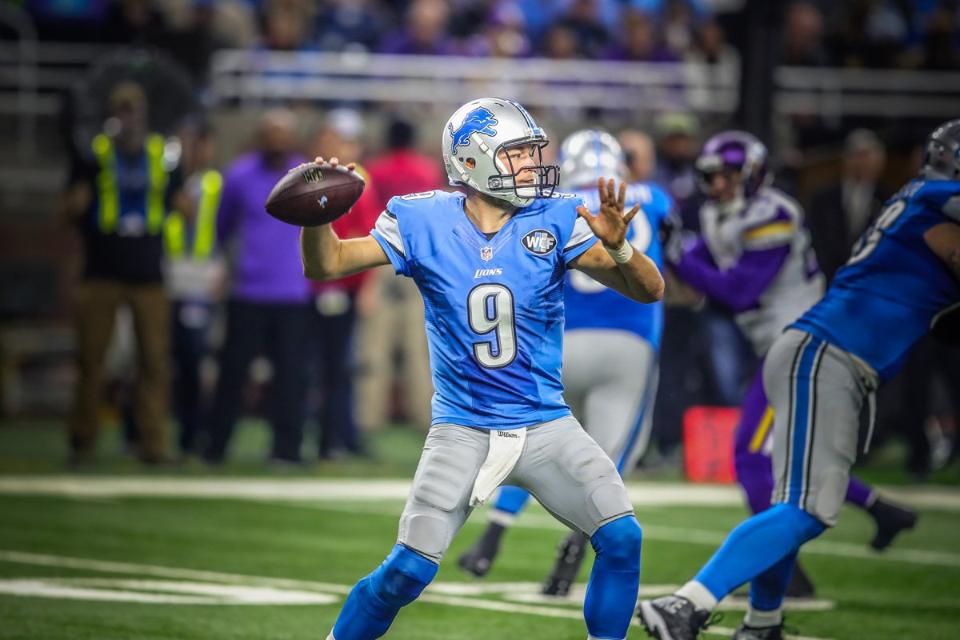 A rematch of last year’s early Thanksgiving game will kick things off again this Thursday, as the Lions host the Vikings in a pivotal NFC North matchup. Minnesota lost last year’s meeting 16-13, but the offensive line has been strides better than the historically-bad unit from a season ago. Also, Latavius Murray is a huge improvement from Matt Asiata as the early-down runner, and Jerick McKinnon is having the best season of his career as a heavily-involved change-of-pace option. Quarterback is the only area where there’s a drop off for the Vikings, but Case Keenum has been sensational in place of the injured Sam Bradford over the past few weeks. Detroit will have their hands full with Adam Thielen, Stefon Diggs, Kyle Rudolph, and the impressive pair of running backs, especially because Mike Zimmer’s defense should make it difficult for Matthew Stafford to have a ton of success through the air on the other side of the ball. They did it last week with a win over the Rams, but I like Minnesota to show a national audience that they’re among the NFL’s elite.

The health of Cowboys left tackle Tyron Smith will play a huge factor for the late afternoon game on Thursday, as Dak Prescott has played the two worst games of his young career since Smith and Ezekiel Elliott have been out of the lineup. While Zeke is an All-Pro running back, I think there’s no doubt Dak’s blindside protector is the bigger loss, especially after Alfred Morris impressed with 91 yards on 17 attempts against the Eagles. That said, even if Smith makes his return, Los Angeles should like their chances in this road matchup. Top corner Casey Hayward should be able to contain Dez Bryant, and the other weapons for the Cowboys haven’t been consistent enough this season to put fear in opposing defenses. If Philip Rivers doesn’t make any big mistakes, the Chargers should be able to move the ball fairly easily with their versatile collection of playmakers, especially since star linebacker Sean Lee is out for Dallas. LA would be legitimate playoff contender in the AFC with a win.

I imagine that the NFL schedule makers pictured this being a game between an 8-2 Giants team and a 6-4 Redskins team or something along those lines, but hopefully football fans and viewers in general will get a good game between two disappointing teams. Washington would have been right in the NFC playoff picture if they didn’t blow a 15-point lead against the Saints in Week 11, but they probably need to win out now to get the six seed. That shouldn’t stop Jay Gruden from doing the best coaching job he can and Kirk Cousins from trying to play as well as he can to try to keep the season alive (and get a nine-figure contract in the offseason), though, and New York surprisingly showed they have some fight left with a win over the Chiefs last week, too. The unpredictability of a Thursday night game isn’t any different because it’s on Thanksgiving, but I like the Redskins at home to conclude the holiday.