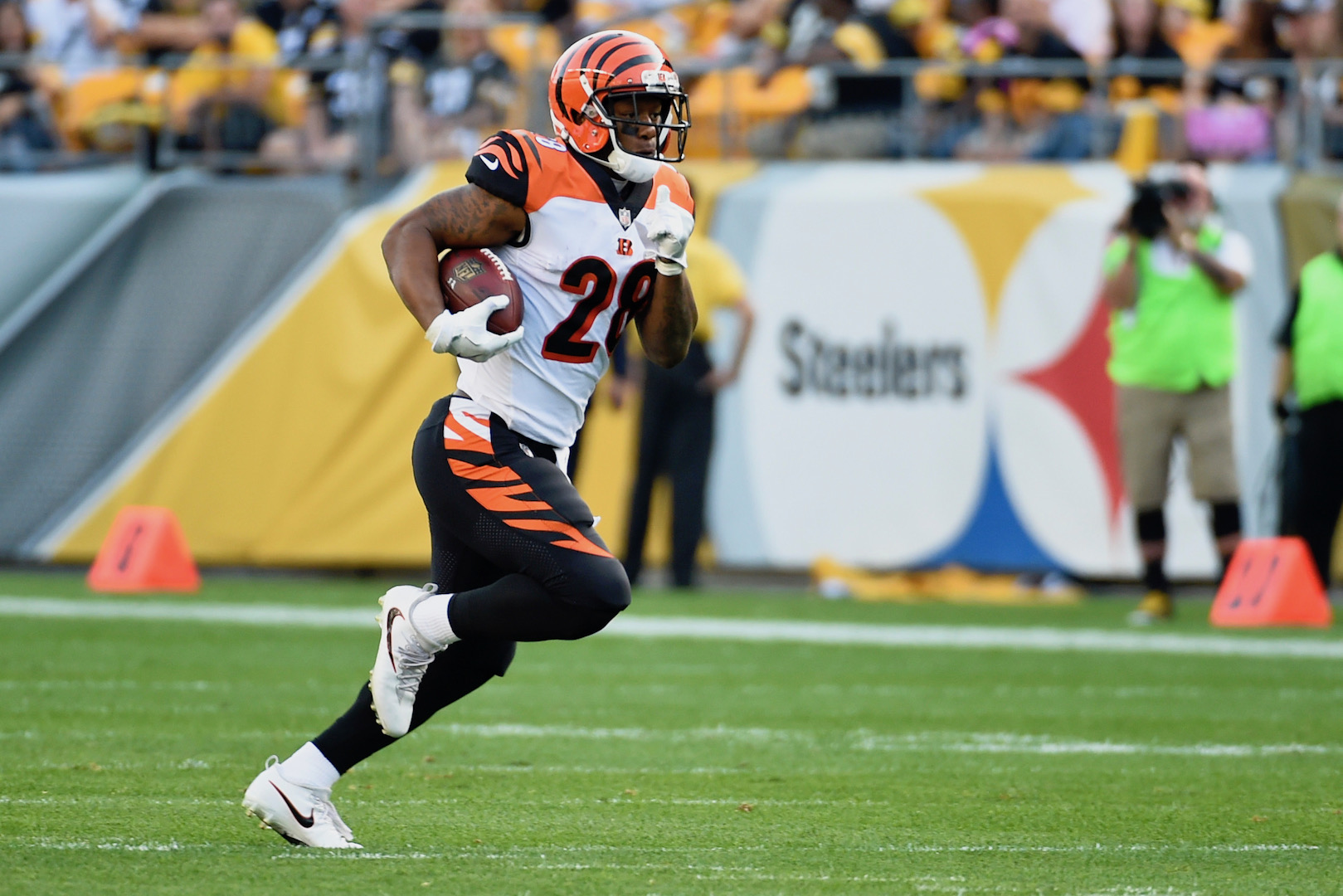 Calling this a Super Bowl LII rematch is something to talk about on Twitter and potentially in the crowd if Philly fans head to Gillette Stadium, but realistically, tonight is going to be a respectful exhibition between two top teams just looking to get some work in. We should see Tom Brady and Nick Foles both on the field, but it will probably just be cameo appearances. I’m mostly interested in the early-game rotation at wide receiver and cornerback for New England, as there are several options vying for a role this fall.

Like the preseason opener, Pittsburgh will be without their superstar trio of Ben Roethlisberger, Le’Veon Bell, and Antonio Brown, but we should get an extended look at Mason Rudolph under center after a solid debut. The third-round pick should have JuJu Smith-Schuster and college teammate James Washington to throw to, and they will be a great challenge for Green Bay’s rookie corners Jaire Alexander and Josh Jackson. Also, Aaron Rodgers is expected to play, so we’ll get at least one drive from the first-team offense for the Packers.

Fans were treated last week when Sam Darnold played for more than a half on national television, and the No. 3 overall pick might have shown enough to get a start tonight in front another primetime audience. Darnold went 13-18 for 96 yards and one touchdown last week, showing excellent poise in the short-passing game. And like last week, no matter what the order of the quarterbacks is, New York will have a notable name taking snaps for 60 minutes. Unfortunately, joint practices between these teams is the only confrontation we will get between Terrelle Pryor and his former team, as the six-foot-four receiver won’t play tonight.

Can the Kansas City offense get rolling after a nondescript preseason opener? We know the Chiefs basically have a track team on the field with Sammy Watkins, Tyreek Hill, and Chris Conley at receiver complimented by Travis Kelce and Kareem Hunt, but considering the team traded away an MVP candidate earlier this year, fans will certainly want Patrick Mahomes to show something before the real games begin next month. We might also see the entire Atlanta offense for a series after Julio Jones and Devonta Freeman sat last week, but I think Andy Reid’s squad is the one that needs to answer questions on both sides of the ball.

While Saquon Barkley probably won’t play this week after tweaking his hamstring in practice, we should get a good look at another extremely promising rookie runner when Kerryon Johnson hits the field and potentially gets more work with the starters. I had the rookie as an early-mid first-round prospect, and he shined last week with seven attempts for 34 yards and four receptions for 33 yards, not to mention a called-back 57-yard run that allowed him to display some moves in the open field. Matt Patricia is making everyone earn their roles (Johnson was covering punts before playing running back), but it will be tough to keep the rookie off the field if he continues to impress.

An explanation isn’t really needed for this game, as Josh Allen and Baker Mayfield will share the field for the first time in their respective careers after a very contentious and polarizing pre-draft process when it came to “expert” evaluations of the two. For one reason or another, social media will probably blow up on Friday night, but there’s no reason to think either guy won’t step up; Allen will want to prove he should have been the No. 1 pick, and Mayfield—who lives with a chip on his shoulder—will look to prove his franchise made the right choice. Of course, an exhibition is very small in the grand scheme of things, so don’t overreact to what happens in this matchup. Corey Coleman’s return to Cleveland is also a big storyline.

I was surprised to see Christian McCaffrey operate as not only the clear lead back, but also the workhorse for Carolina in the preseason opener, especially considering C.J. Anderson played deep into the game. Despite my surprise, I think the Stanford product can handle heavy workloads and turn into an elite player, so it’ll be interesting to see how much run Anderson gets with the ones against Miami. For the Dolphins, I’m still watching rookies Minkah Fitzpatrick and Mike Gesicki, but Kalen Ballage is currently in the concussion protocol.

Arizona’s starting offensive line did a really nice job opening holes for David Johnson in the preseason opener, but we didn’t see them pass protect much, which is the bigger concern if Sam Bradford—who threw just one pass for six yards last week—is going to stay healthy. The offense is probably going to be opened up a bit if Bradford plays more than one drive, so the underrated trio of he, Johnson, and Larry Fitzgerald will look to build some momentum for next week’s dress rehearsal and into the regular season. Also, Josh Rosen is expected to get some work with the starters, and a stronger supporting cast should help him fare better than he did in his debut.

Football fans are fortunate to have a quadruple-header on Saturday, and it kicks off with an afternoon matchup between two Super Bowl hopefuls. The Jaguars will be without Jalen Ramsey and Dante Fowler thanks to team-imposed, one-game suspensions for “violating team rules and conduct unbecoming of a Jaguars football player,” but I think it’s a needed stance for an old-school team that has new-school players—as recently evidenced by Ramsey’s opinionated interview with GQ. It’s a shame that being disrespectful is what’s “cool” nowadays (just look at all the people who support Ramsey on Twitter), but I think Josh Allen, Golden Tate, Eli Manning, and—best of all—Matthew Stafford’s wife Kelly had the finest responses. On the field, look for Kirk Cousins to stay hot and Latavius Murray to continue earning a significant role behind Dalvin Cook in the regular season.

It seems odd that two teams will face off in the preseason and then again in the season opener, but that’s the case with the Raiders and Rams this year. Perhaps the league feels that Sean McVay and his mentor Jon Gruden know each other enough that it isn’t a big deal, but you better believe that neither head coach will tip their hand in an exhibition. Hopefully we get to see Jared Goff and LA’s offensive starters for at least a little bit after they sat in the opener, but at least Gruden’s guys should be out there since everyone, including veteran Jordy Nelson and quarterback Derek Carr, played last week. If there’s a game to miss on Saturday, though, it’s probably this one.

It will come down to Andy Dalton at the quarterback position, but Cincinnati’s offense has a chance to really take off this season if everyone stays healthy with A.J. Green, Joe Mixon, and John Ross all potentially being big-time contributors. We know Green is one of the league’s underrated stars, but Mixon showed what he could do last week with a beautiful touchdown along the sidelines, and Ross is a blazer that has natural receiving skills to bounce back from a lost rookie year. I think the group could provide some excitement in Dallas, so it will be a good test for the Cowboys’ young defensive talent.

Marcus Mariota looked very comfortable in Tennessee’s new-look offense last week, as he completed two-of-three passes for 42 yards and a score in his only drive. But while the No. 2 pick in the 2015 NFL Draft and his team are trending upward in my opinion, former No. 1 pick Jameis Winston and the Bucs are heading in the opposite direction. It’s weird to see Winston playing with the backups, but he can’t blame anyone but himself for the team wanting to get Ryan Fitzpatrick ready for the first three weeks of the regular season while Jameis is suspended. Besides the quarterback position, I want to see Taywan Taylor carry over his breakout camp into game action against a weak Tampa Bay secondary.

If this were the regular season, it would be an awesome week to see quarterback battles, but we are at least getting a little taste for most games. That includes Jimmy Garoppolo and Deshaun Watson, both of whom are looking to take their respective teams from worst to first in 2018. Garoppolo could have a bit more on his shoulders with Jerick McKinnon (knee) possibly out until the regular season, but I think veteran Alfred Morris could climb the depth chart after being signed a couple days ago, which could be a blessing in disguise if he turns into an effective short-yardage compliment in September. Right now, health is the biggest key for the big names on each roster, so we might not see extended action from them until next week.

Last week, I said “Lynch will probably get first crack [at the backup job], but I think Kelly is going to end up the victor by the end of camp.” However, even as someone that was never sold on Paxton Lynch and all in on Chad Kelly, it came earlier than expected. Before they enter the game this weekend, though, Case Keenum and the first-team offense needs to get rolling after an unremarkable start against the Vikings. On the other side of the field, Allen Robinson is set for his preseason debut with the Bears, and I’d love to see him get a chance to make a play on a deep shot. It would also be a bonus to have Roquan Smith hit the field for Chicago.

The night cap gives us 12 hours of football in a row, which is a solid tune-up for Saturdays and Sundays this fall. Watching linebacker Shaquem Griffin fly around the field should be enough to keep those on the east coast awake, and the rookie is hoping to build on his nine-tackle debut to potentially force his way into the starting lineup. Again this is just preseason action, but Griffin continuing to defy the odds to become a star in the NFL would be an all-time sports story, and I wouldn’t bet against him.

They are also calling tonight’s game between the Jets and Redskins, but ESPN’s new Monday Night Football crew (Joe Tessitore, Jason Witten, Booger McFarland, and Lisa Salters) will have the eyes and ears of all football fans in a traditional MNF matchup between the Ravens and Colts to close out Week 2 of the preseason, which is reason enough to tune in. The Ravens could unleash their upgraded offense in a good spot against arguably the worst secondary in the league sans Malik Hooker, but like last week, most people will be watching for Andrew Luck, who probably wants to knock off as much rust as he can before Week 1.