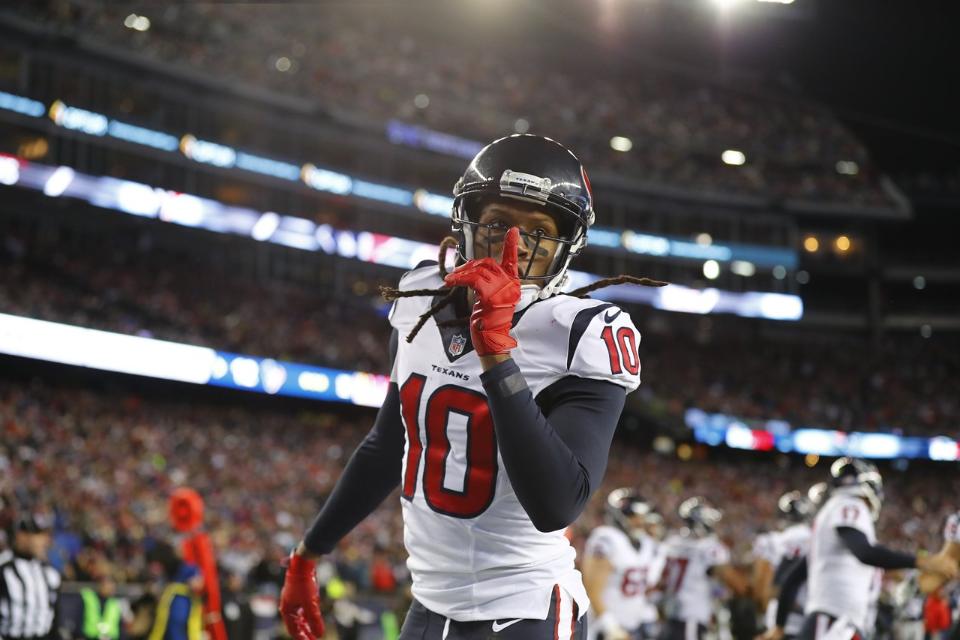 Sean McVay’s offense is working so far, as the Rams have the second most points in the league (66) through two weeks, and they had a chance to tie the game against Washington on Sunday before Jared Goff threw an interception on the final drive. Goff stared down his receiver, but it’s not something he usually does, and I doubt it happens again. He gets a chance quickly forget about it with tonight’s game against San Francisco, but the 49ers have way more talent than they did a season ago. I still like LA’s young offensive core to make a statement in primetime, though. Look for Sammy Watkins to get a couple deep shots after catching seven-of-seven targets in Week 1 and 2.

You’re going to have to wake up early if you want to catch the start of this one, especially on the west coast. If you like defensive football, it will be worth it, as Baltimore might have the NFL’s best defense, and the Jaguars are loaded on that side of the ball, too. While Joe Flacco isn’t 100% by his own accord, the Ravens have a clear edge at the quarterback position. However, protecting him won’t be as easy with top lineman Marshall Yanda on IR, and the Jags can definitely get after the passer, as evidenced by their 10 sacks in Week 1. I expect a competitive game on Sunday morning.

I don’t think many people will be too excited to watch this one, as the Browns still look like the Browns despite some offseason optimism, and the Colts are proving how great Andrew Luck is by falling apart without him. Indy gave the Cardinals a game last week and will be at home in this one, so that’s one edge. Also, I think Jacoby Brissett might actually give them the advantage at quarterback with the way DeShone Kizer has started his NFL career. It’s a toss up, but I like the Colts.

The Eagles have the Giants number in recent years with a 6-2 record over the past eight games, but New York split the series last year with an even point differential (each game was decided by five points). Philadelphia was more dominant when Chip Kelly was head coach, as they went 5-1 in his tenure (including Week 17 of 2016 with his team and coaching staff after he was fired), winning by 17.5 points per game in the games Kelly actually coached. Things aren’t looking great for New York with the paper-thin offensive line protecting a declining Eli Manning, but they might play at their best with their backs against the wall. It’s hard to see them going into Philadelphia and getting a win because of Philly’s feared defensive front, but I think they have a shot.

It would seem there’s a pretty good chance that the NY teams are a combined 0-6 after Sunday, as the Dolphins just got a huge win over the Chargers and will now come back east to face their division rival. With Jay Cutler at quarterback, I think Miami is even better than they were a year ago when they made the playoffs and swept the Jets, whom are pretty clearly even worse than last year. Cutler has a bunch of weapons to throw to and an elite running back behind him to open up the passing game; I don’t see how the Jets will stop them.

The Broncos have been extremely impressive to start 2017, and although we should keep in mind that both games have been at home, Trevor Siemian’s play has been exemplary. The 25-year-old quarterback has complete command of Mike McCoy’s offense and will look to stay hot against Sean McDermott’s inspired Buffalo defense. The Bills’ new head coach has an attacking front and strong secondary with emerging-star cornerback Tre’Davious White making a very early case for Defensive Rookie of the Year. The first-round pick will be tested against Demaryius Thomas and Emmanuel Sanders, and even if he holds them in check, the Bills might not have the offensive firepower to get a win.

With a road game against the Panthers on Sunday, Sean Payton and the Saints are staring their third-straight 0-3 start in the face. The schedule-makers didn’t do them any favors with Minnesota, New England and now Carolina to get things started in 2017, but they have a chance here with Cam Newton struggling with serious inaccuracy issues coming off shoulder surgery. The Panthers have the NFL’s top scoring defense, though, and we know Drew Brees isn’t quite as awesome away from the Superdome. Plus, there’s nothing that will make a guy look healthy—meaning Cam—like facing the Saints defense. I’m taking the home team.

Pittsburgh is in good shape at 2-0 with Le’Veon Bell and Antonio Brown not even finding the end zone yet, but hopefully they are careful not to underestimate the Bears in this road game with the Ravens up next on the schedule. The Steelers only won by three points against the Browns in Week 1, and Chicago has a better defense, underrated offensive line, and a better quarterback than Cleveland, not to mention they gave the defending NFC champions a game in the season opener. Jordan Howard’s health is a concern, but if he’s active and effective, the Bears might keep it close.

The Falcons got a convincing win over the Packers on Sunday Night Football, but I wish we could have seen the two teams get into a full-fledged shootout before injuries hit the Green Bay offense. Atlanta will surely take it, though, and now get another NFC North team in the Lions for another potential shootout. Detroit has looked as good as anyone through two weeks, but with the Cardinals needing overtime to beat the Colts and the Giants eking out just 13 points through two weeks, perhaps it says more about those two possible contenders than anything else. Matthew Stafford and his guys have an opportunity to prove they are legitimate contenders with a win over the Falcons on Sunday, but I’ve got Atlanta in a fun, high-scoring contest.

This one’s all about the health of Sam Bradford, as I had Minnesota beating the Steelers last week until he was ruled out, and the same prediction is true against Tampa Bay. Case Keenum didn’t turn it over in place of Bradford, but he only had 167 yards, and the Bucs are coming off a near-shutout win over the Bears. The Vikings defense should be able to take away Mike Evans with Xavier Rhodes on him, and they have other secondary players to contain DeSean Jackson, Chris Godwin, and the tight-end duo, but Jameis Winston is still someone I trust more than Keenum. We’ll know by Sunday morning if Bradford is playing.

New England is 8-1 all time against the Texans, including a 3-0 record with a 22-point average margin of victory since Bill O’Brien, formerly the Patriots offensive coordinator, took over as head coach. I was as high as anyone on Deshaun Watson’s NFL prospects (except for Dabo Swinney), but a rookie quarterback going into Foxborough usually doesn’t come out with a win. Houston’s defense forced Tom Brady to throw two interceptions in last year’s playoff game, but he’ll be better facing a banged-up secondary this week. Even with extra time to prepare, I doubt the Texans chances.

This should be one of the more competitive games of the week, as the Titans host the offensively-challenged Seahawks. Seattle has the quarterback, running backs, and receiving weapons to complement their defense, but the offensive line rivals the Giants for worst in the league. Tennessee has a solid defense, but they have an average to below-average pass rush, so perhaps Russell Wilson will have some time on Sunday. At home, though, I like Marcus Mariota to make enough plays against Seattle no matter which running back is with him in the backfield.

Really good teams typically bounce back after a big loss (the Patriots last week are the most recent example), and the Packers are a really good team. They should have Jordy Nelson back after he left early in Sunday night’s loss to the Falcons, so Green Bay’s offense should be much better than their current 20 points per game through two weeks. For Cincinnati, they should have a different offensive approach with Bill Lazor taking over as coordinator, and I think it will include more targets for A.J. Green, more snaps for Joe Mixon, and a faster-paced attack. Getting in a shootout with Aaron Rodgers in Green Bay rarely results in a win, but that’s probably what the Bengals will have to do.

There simply isn’t a team with worse luck than the Chargers, and it hasn’t just been a one-year thing. Los Angeles could easily be 2-0 if their kicker didn’t miss two late-game field goals, and I fully expect them to be in Sunday’s game with the Chiefs. Melvin Gordon, Keenan Allen, Hunter Henry, and others give Philip Rivers the most weapons he’s ever had, and LA’s defense should get better as the season progresses. I think the play calling could be better, but catching the Chiefs on the road after two-straight big wins could play to the Chargers’ advantage. We’ll see if they can be the first team to stop Kareem Hunt.

Oakland followed up a big win over the Titans in Week 1 with a blowout over the Jets last Sunday, and they own the NFL’s largest point differential (+35) heading into this week. With the defense playing better than expected and the offense winning in a variety of ways, the Raiders are picking up right where they left off before Derek Carr’s injury last December. The Redskins, despite picking up a win against the Rams, are the opposite, looking completely out of rhythm offensively with their new-look receiving core and allowing some chunk plays on defense. All that said, I think Washington will win at home on Sunday night, as the tall Oakland corners could struggle to cover Jamison Crowder, and it just feels like a strong primetime performance is coming from Kirk Cousins.

Arizona hosts Dallas for their first home game of the season, and they’ll hope to be a lot better than they were over the first two weeks as the lost to the Lions and barely beat the collapsing Colts. The Cardinals have injuries piling up with superstar back David Johnson, deep threat John Brown, and left tackle D.J. Humphries, and while Johnson is obviously out for a bit, it doesn’t look like the other two will be able to go on Monday night, either. Opposing them, the Cowboys are coming off an all-around embarrassing loss to the Broncos, and Ezekiel Elliott is rightfully taking a lot of criticism for his lack of effort in the game. I would expect him to run hard to make up for it, but with Patrick Peterson on Dez Bryant, Arizona can probably stack the box and make his frustrated again. As long as Carson Palmer keeps it together, I like Arizona with all the injuries in the Cowboys secondary.