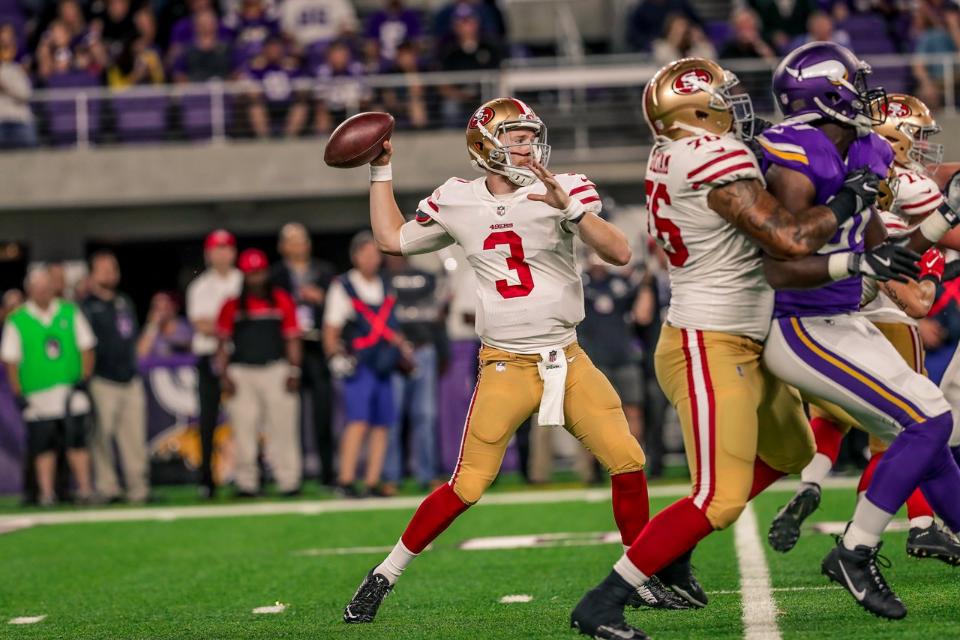 
The 2017 NFL preseason wraps up tonight, and most teams are expected to rest their starters. Still, there are reasons to watch each game to hold fans over until the regular season, which begins in one week with the Patriots and Chiefs.

The Eagles barely played their starters in the third preseason game, so you can be sure they’ll be resting tonight. New York has more intriguing young players to keep an eye on, including Christian Hackenberg, as I think he still has potential to be a good starting quarterback in the NFL.

Jacksonville named Blake Bortles the starter after last week’s game, but quarterback remains the weak spot on a team that has a lot of talent on both sides of the ball. Second-year player Brandon Allen has been impressive this month, and he might end up under center at some point in the regular season if Bortles struggles.

As if Andrew Luck’s slow recovery from shoulder surgery wasn’t enough, news broke a couple days ago that Indianapolis lost Vontae Davis for a few weeks with a significant groin injury. The Colts are now without their best offensive and defensive player, and will rely on first- and second-round rookies Malik Hooker and Quincy Wilson to stabilize the secondary early in the season.

There will be a lot of quarterback watching tonight, and teams looking to the future might be paying close attention to Green Bay’s Brett Hundley. The 24-year-old was one of my top “bargain bin” quarterback targets in an article from a month ago, and he’d be a good target for the Jaguars (if they decide to make a trade) or another team that eventually has an injury at the position.

Hayden was the 12th overall pick by the Oakland Raiders in 2013, but his career in the Bay Area was mostly a disappointment, and now he’s trying to carve out a role with Detroit. He isn’t the only cornerback to struggle recently with Oakland, though, and having just turned 27, Hayden still has time to turn his career around. He’s played well so far this preseason and will try to keep it up against Buffalo.

It’s unclear if the Panthers’ second-round pick will be playing tonight, but Curtis Samuel could make the highlight reel against mostly backups if he gets the ball in his hands. The Ohio State product should have a role early in the regular season, as the team will want to get him touches and let him make plays.

Last season, Tom Brady played an entire half in the Patriots’ fourth preseason game, but that was because he was suspended in the regular season; don’t expect him to play in this one, especially after the injury to Julian Edelman last week. Instead, Jimmy Garoppolo will look to continue to prove his worth behind TB12. For the Giants, Geno Smith is trying to win the backup job behind Eli Manning, and I think he should.

This week’s episode of Hard Knocks featured two rookies (Riley Bullough and Jeremy McNichols) struggling, and they are both trying to crack the roster, so they’ll need good performances in the preseason finale. Next week’s season finale of Hard Knocks will be like nothing ever before because 37 players will be cut to get the roster from 90 to 53.

Head coach Mike Zimmer hasn’t decided if Minnesota will play their starters at all after a poor showing in Sunday night’s preseason game, but there is a decent chance they’re out there. Anytime the starters do play in the fourth preseason game, it becomes a much better game to watch, even if it’s only for a series or two.

The most important part of all of these preseason games are roster battles, but I am looking at the Ravens in particular. It’s not often that a Super Bowl breakout doesn’t play in a regular season game after his big game, but that’s what has happened to former Seattle wideout Chris Matthews, as he caught four passes for 109 yards and one touchdown in Super Bowl XLIX, but hasn’t played in the regular season since. We’ll see if he can crack the Ravens roster.

Cleveland has named rookie DeShone Kizer the starting quarterback, but he went just 6/18 last week in his first start, so even though head coach Hue Jackson isn’t sure if he’ll play, you’d think the team wants to get him as much work as possible before jumping right in and facing the Steelers in Week 1. For Chicago, Mitchell Trubisky will make his first start, and he might win the job outright with another strong performance. The Bears have all the pieces in place to have success with a young quarterback.

Head coach Mike Mularkey said his starters will play in the fourth preseason game, so that gives us a good reason to watch this one tonight. It will probably just be for a series, but Tennessee is looking to get momentum heading into Week 1 after a sub-par offensive performance on Saturday.

The former first-round pick leads the NFL in passing yards with preseason with 496, and he’s looked good in his first year under Bruce Arians. Gabbert will look to keep it going in Denver, which—even in the preseason—is a tough place to play. Notably, Arians thinks Gabbert could be a starting quarterback in the NFL again.

We could get a preview of the top two running backs for Seattle in 2017, as both Thomas Rawls and C.J. Prosise might get some work in after missing time with injuries. Also, Marshawn Lynch faces the Seahawks for the first time as a Raider, but he most likely isn’t going to play tonight.

Wyoming quarterback Josh Allen recently made headlines when he joined Adam Schefter’s podcast and said he’d want to play for the 49ers, and while that’s definitely possible in 2018, this year’s third-round pick C.J. Beathard will have something to say about it. Beathard has played great this preseason, and there is a chance he makes starts this season on a Niners team that isn’t expected to contend.