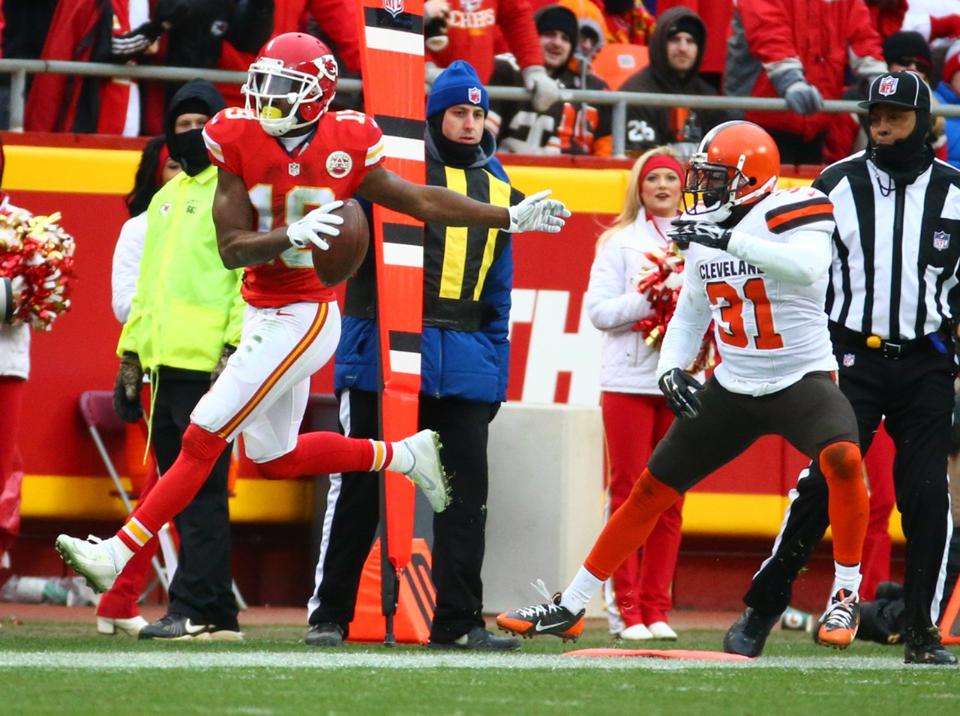 
The Kansas City Chiefs just made a shocking move, releasing Pro Bowl receiver Jeremy Maclin. I’m doing an all-underrated series, which started last week with Sam Bradford at quarterback, and Maclin was going to be my choice for all-underrated wide receiver. Maclin is one of the most reliable receivers in the NFL and has constantly performed when healthy. Many teams will certainly be interested now that he's available. Here are some possible destinations and good fits for Maclin.

Unfortunately, Ravens tight end Dennis Pitta received worse news than Maclin today, when he suffered a bad hip injury for the third time in four years, perhaps ending his career. The Ravens are lucky to be deep at tight end, but they could still be looking for another reliable target for Joe Flacco. Maclin, paired with Mike Wallace and Breshad Perriman, would form one of the better receiver trios in the NFL.

Well the Cowboys just got $14 million in cap space from the earlier release of quarterback Tony Romo, so they have room to sign someone like Maclin. With Dez Bryant on one side, Maclin would be a scary number two option for opposing defenses to keep track of. Maclin has also shown he’s a clutch player, something the Cowboys might need come January.

The Niners already signed Pierre Garçon to a big contract in free agency, but they have the most cap room in the NFL and could use another veteran receiver to go with Garçon. Maclin might have to be convinced to join a team that is so far away from winning, however.

They’re totally stacked at receiver, but signing Maclin would be such a Patriots move. New England has the cap space, and Maclin just seems like he would be a great Patriot. He’d need to be convinced of being more of a role-type player instead of a full-time starter, though, because of the presence of Brandin Cooks, Chris Hogan, and Malcolm Mitchell on the outside—but all the Pats receivers, including Julian Edelman and Danny Amendola are versatile, as is Maclin.

Josh Gordon had his reinstatement opportunity pushed back to the fall, and the Browns could use all the talent they can get. Cleveland signed Kenny Britt in free agency, and they have promising second-year receiver Corey Coleman. But Coleman is hurt again and might be out until training camp, and Maclin would be a great mentor while also contributing on the field. The Browns have the money to pay Maclin a lot of money, maybe even on a one-year deal if they want to improve this season.

With little cap space, the Eagles would either need Maclin to take a big discount or clear some room for him. One thing the Eagles are good at is clearing cap space to make moves, so that’s not too big of a concern. Of course, Maclin started his career with the Eagles, and fans would love it if they signed him. The team signed Torrey Smith in free agency, but he’s no lock to make the team. Maclin would be a good example for Nelson Agholor, someone who has drawn comparisons to Maclin in the past. It’s also worth noting that Jordan Matthews is entering a contract year.

Second-round rookie Zay Jones is week-to-week with a knee sprain, so he’s falling behind in the competition for a starter opposite Sammy Watkins. Also, Watkins is entering a contract year, as the Bills didn’t pick up his fifth-year option. While I like Andre Holmes and thinks he has potential for the Bills, Maclin is a sure-thing as a great number two to pair with Watkins. Head coach Sean McDermott was also the secondary coach and defensive coordinator during Maclin’s first two seasons in the NFL with the Eagles, so he knows him.