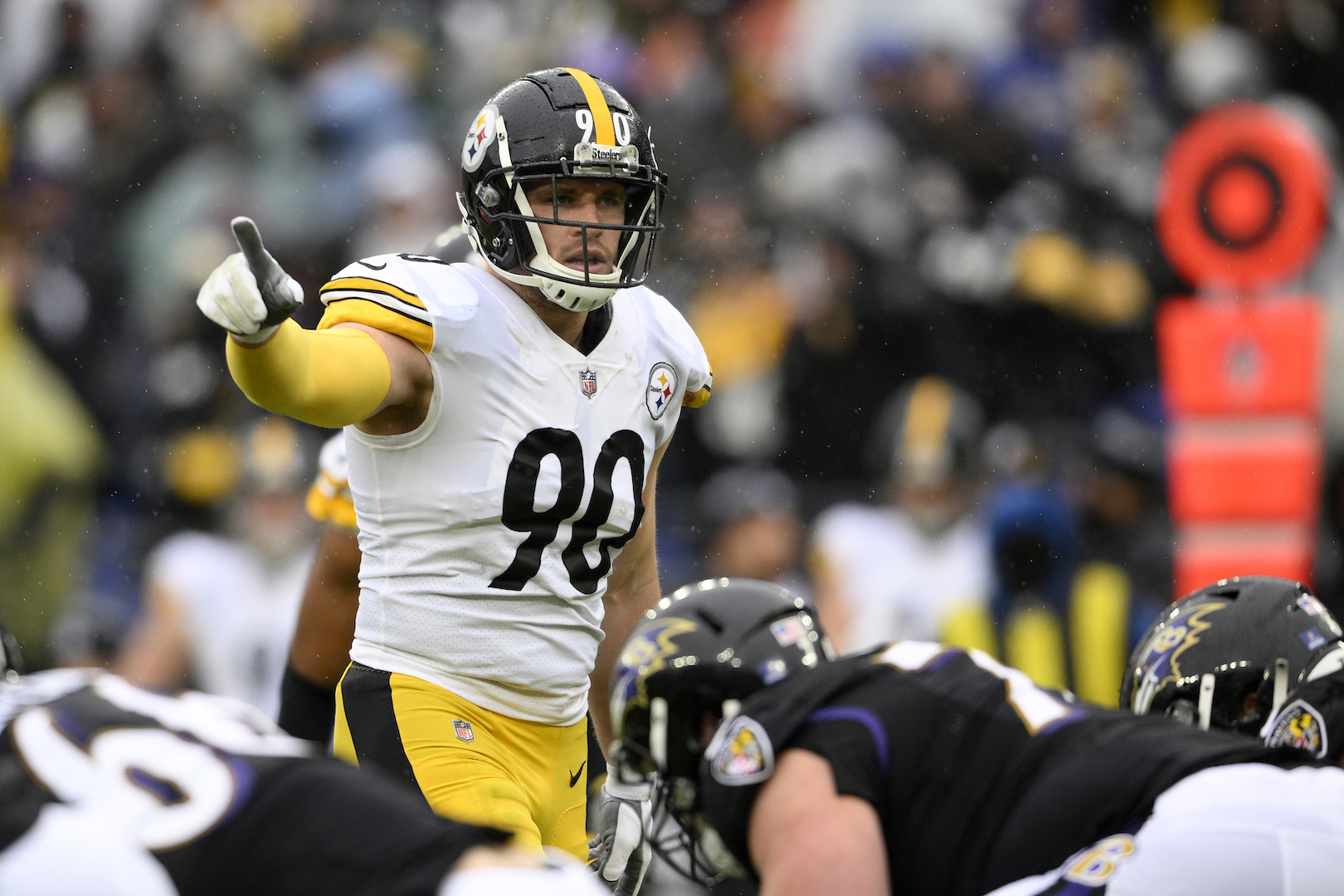 
Below are our selections for the 2021 NFL All-Pro defense. If you missed the selections on offense, you can view them here.

Watt was our choice for NFL Defensive Player of the Year, and he deserves it after tying Michael Strahan’s single-season record for sacks. Pittsburgh’s superstar edge defender also causes disruption without getting to the quarterback, and his presence basically pushed the Steelers into the postseason (9-5-1 record when he played; 9-2 record when he played more than 55% of the team’s defensive snaps). Hopefully this is finally the year Watt gets recognized with DPOY.

Coming off a 2020 season in which he recorded just 2.0 sacks to begin his stint in Chicago, Quinn deserves a ton of credit for taking his game to another level with 18.5 sacks this year—including catching fire down the stretch with 13.0 sacks over the final nine games. The Bears will be counting on Khalil Mack to return and form a championship-caliber duo with Quinn in 2022.

The Steelers struggled defensively for much of the season (at least compared to usual standards), but Heyward can’t at all be blamed for it—as either he or T.J. Watt seemed to make every single tackle for them in 2021. Although Heyward has long been one of the NFL’s most underrated players, he’s one of the few defenders (along with Aaron Donald, Darius Leonard, and Tre’Davious White) to be selected to our All-Pro team at least three times.

Donald is now five-for-five making the Wolf Sports All-Pro Team, as he remained a game-wrecker on the defensive line, and the unit stiffened up down the stretch to help Los Angeles win the NFC West. The lone knock on Donald throughout his career has seemed to be sometimes being quiet on the biggest stage, so we’ll see if he can show up this weekend in Tampa Bay by getting to Tom Brady.

Parsons was like the Tasmanian Devil for Dallas in his first NFL season, creating terror for opponents by getting to the quarterback and flying around the field to track down ball-carriers. Simply put, it was an all-time great rookie campaign, and Parsons should be a perennial Defensive Player of the Year candidate.

Anyone that closely paid attention to the Colts this season knows that Leonard dealt with an ankle injury for much of the year, but it didn’t stop him from making impact plays for an opportunistic Indy defense. Overall, “Maniac” had a combined 15 interceptions, forced fumbles, and fumble recoveries.

Smith doesn’t get the hype that others at the position do, but he’s undoubtedly an elite, all-around linebacker—playing extremely hard no matter the score or situation for Chicago. The former Georgia star has somehow yet to make a Pro Bowl, but he’s at least been named a Second-Team All-Pro in each of the past two seasons.

Diggs isn’t a shutdown, Darrelle Revis-style cornerback, but he’s the best playmaking corner in football and shouldn’t be questioned as an All-Pro selection. The second-year defender single-handedly changed games with his football intelligence, athleticism, and ball skills on the outside; Diggs might be even better next year.

A new role for Ramsey this season highlighted his versatility, and the main area where that showed up was his aggressiveness/effectiveness as a tackler. At times, we’d have liked to see Ramsey shadow more to stop the top option of an opponent, but the former No. 5 overall pick was phenomenal whether lined up on the perimeter or in the slot.

Byard himself would tell you that he didn’t have his best season in 2021, but the 28-year-old rebounded in a big way for Tennessee’s underrated defense—steadying the backend to support a strong front on the way to the No. 1 seed in the AFC. During a 6-0 stretch from Week 5 through Week 10, Byard was able to get both Josh Allen and Matthew Stafford for key interceptions.

Poyer and running mate Micah Hyde—who combined for ten interceptions—led the league-best Buffalo defense in terms of total yards per game (272.8), passing yards per game (163.0), and points per game (17.0) allowed this season. Individually, Poyer had his best season to date by continuing to bring great cover ability and physicality to Sean McDermott’s defense.