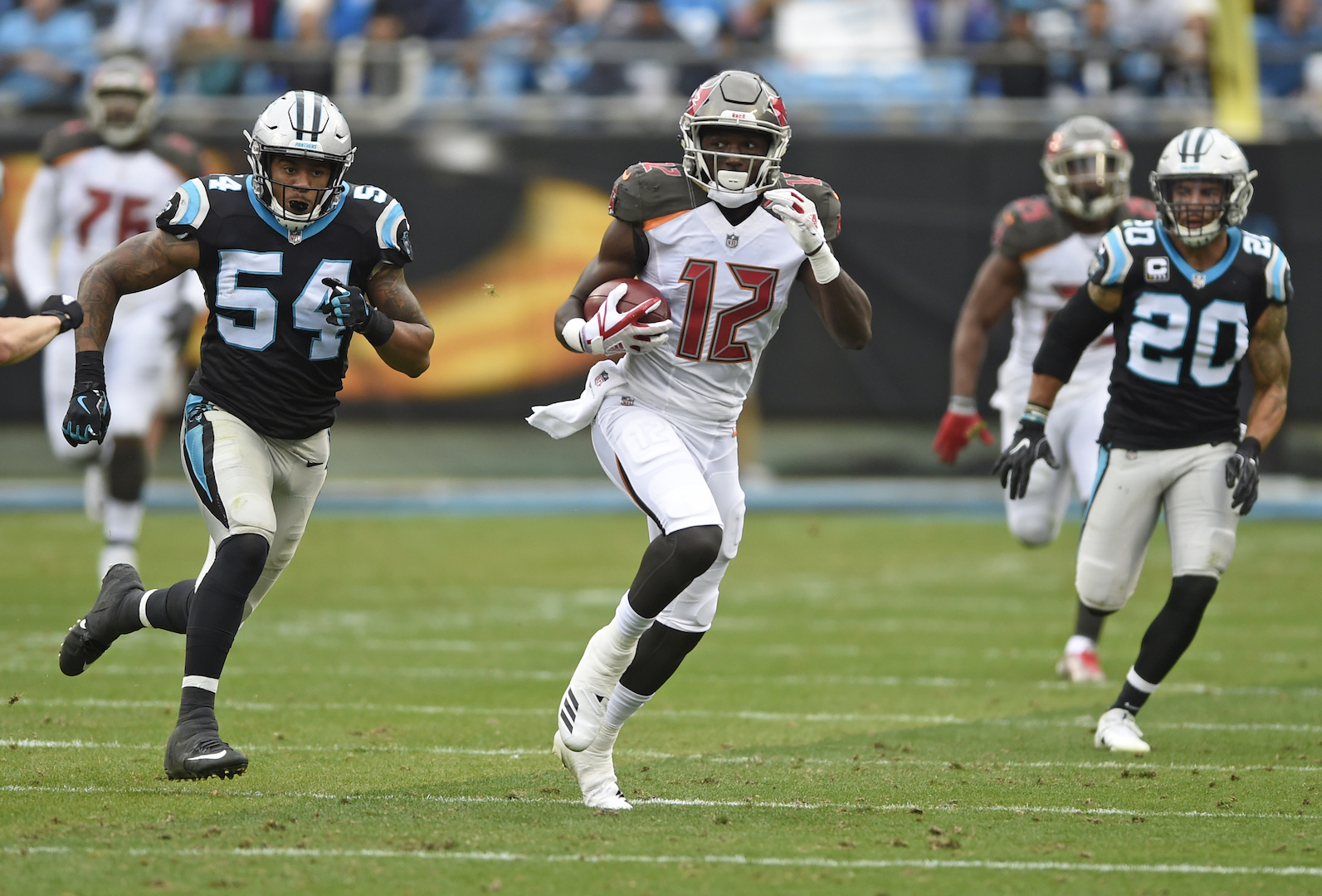 
Dynasty leagues are growing in popularity, and because fantasy owners are able to keep “their guys” year after year, it’s easy to see why. Plus, whether it’s a good thing or a bad thing, I think a perennial contender is easier to build in dynasty leagues, especially if you are more prepared than the competition—and that begins with the startup draft. For those participating in dynasty formats later this summer, these are 15 great values up and down the board. [Note: ranking is based on Fantasy Pros expert dynasty rankings]

I think Saquon Barkley should be the consensus first-overall pick in dynasty startups, as he has the talent to quickly become the best running back in the NFL and the perfect coaching staff in place to put up some monster numbers as early as this fall. Barkley gets the edge over proven commodities like Todd Gurley, David Johnson, and Odell Beckham Jr. because of his age (21); fantasy owners should have 8-10 years of a superstar RB1 with Saquon.

Because he’s averaging just 3.8 yards per carry in his career, there is a somewhat common belief among fantasy “experts” that Melvin Gordon is an average player, which couldn’t be any further from the truth. The former first-round pick is a standout talent that has consistently made defenders miss in the backfield to earn every yard he’s gained over the past three seasons, and Los Angeles will finally have a strong interior offensive line with Dan Feeney, Mike Pouncey, and Forrest Lamp this year. Gordon should be a borderline top ten pick in dynasty leagues.

Entering the final year of his contract, Tevin Coleman could be unleashed in 2019 as the full-time starter for someone other than Atlanta. I’m already excited thinking about Buffalo or Oakland as potential destinations, and I truly believe he has 2,000-yard upside if he’s given the opportunity to be a workhorse, which he almost certainly will get because of his ability as a receiver and pass-protector to go along with his game-breaking speed as a runner.

Detroit’s second-round pick was a stud for Auburn in 2017, and I viewed him as a combination of Le’Veon Bell and David Johnson leading up to the draft because of his patience, vision, running style, and potential as a receiver. This season, Kerryon Johnson will be in a crowded backfield with pass-catcher Theo Riddick and pounder LeGarrette Blount, but he has the talent to keep them both off the field. Plus, it’s important to remember that the Lions traded up to take Johnson. I think he will be an RB1 in his career, which would shatter his current RB26 ranking.

I will never understand how Chris Godwin was a late third-round pick in the 2017 NFL Draft, but he was a top-25 prospect for me and a beast in limited playing time as a rookie—turning 55 targets into 34 receptions for 525 yards and one touchdown. The Penn State product is impressing again this offseason for the Bucs, and offensive coordinator Todd Monken has said he “earned the right to be a starter.” Get him while you can.

Last year, Chris Hogan looked like a WR1 when he caught five touchdowns over the first five weeks of the season and went for 60+ yards six times in September and October, but he only played one game over the final two months of the regular season due to a shoulder injury. However, the Patriots clearly feel good about Hogan in the offense after he caught six passes for 128 yards and a score in the Super Bowl, and even turning 30 in the fall, the former lacrosse player should have a lot left in the tank—especially with Tom Brady throwing passes. Also, I find that Hogan lasts way longer than his current ranking.

Speaking of Tom Brady, he is an absolute steal in dynasty startups, as he can easily be paired with a young, low-ranked signal-caller that fantasy owners think will turn into a star later in the draft. And while I wouldn’t bet against Father Time, I also wouldn’t bet against TB12, who should be a high-end QB1 for as long as he continues playing. Fantasy owners should try to pair him with the rookie I have later on the list (or looking ahead, Georgia quarterback Jake Fromm in 2020).

Players ranked above Anthony Miller in dynasty leagues: Emmanuel Sanders (WR51), Rishard Matthews (WR56), and Kenny Stills (WR58). I would argue that Miller’s career floor is around the current ceilings for those three veterans, so why is the former Memphis superstar ranked below them? Fantasy owners shouldn’t be concerned about Allen Robinson being the top target in the passing game, as Miller is the perfect compliment in Matt Nagy’s offense.

At a long six-foot-six in the mold of Jimmy Graham, Mike Gesicki should be a dominant red-zone target as soon as he steps on an NFL field, and he will have overall TE1 upside in a couple years. The former volleyball player needs to improve as a blocker to have a more well-rounded game, but you don’t get fantasy points for blocking, and as a pure receiver, Gesicki is better than O.J. Howard or David Njoku, both of whom are going much higher than Miami’s second-round pick. I’m pumped to see how Adam Gase utilizes him.

I was all-in on Ty Montgomery last season, and I’m not ready to jump off the bandwagon so easily. The converted wide receiver was a usage monster before a rib injury derailed him in Week 4, and another full offseason at running back should have Montgomery more prepared for whatever role he has in 2018. I like both Aaron Jones and Jamaal Williams, but I believe Montgomery—who is just entering his age-25 season—will be the favorite for touches in a high-powered offense, and he could runaway with the committee lead for the next handful of years.

When evaluating Hines earlier this year, I said his potential is “what Tyreek Hill might look like if he exclusively played running back,” so it’s safe to say I’m pretty high on him. For Indy, he will be used as a runner, receiver, and returner; and on an offense lacking talent, Hines could realistically be the team’s second option behind T.Y. Hilton. If he lives up to his lofty potential, the former track star will shatter his ADP in startup drafts.

It’s not every day that a former sixth-round pick is compared to LaDainian Tomlinson, but that’s what Jets running backs coach Stump Mitchell did with second-year back Elijah McGuire last week when he said the 24-year-old “has the skillset to be [L.T.], if he was given that opportunity.” Well, on a wide-open depth chart, the opportunity is there for the taking in New York. I think McGuire is a straight-up better option than Isaiah Crowell (RB41) in dynasty leagues, and he can be had for half the price.

Barely being drafted in even the largest of dynasty leagues, Jake Butt is a former Day 1 prospect that has his draft status impacted by a knee injury suffered in the Orange Bowl two years ago. Fortunately, he’s worked hard after a redshirt rookie season in 2017, and Butt could be Denver’s starter this fall. The Michigan product is the same height and weight as the aforementioned Mike Gesicki, but he has a more compact build and excels as an in-line tight end. I like Butt as a solid, consistent TE1 in 2019 or 2020 after he knocks the rust off and gets used to NFL speed.

This is just mind-blowing to me, and proof that groupthink has gone way too far, as Josh Allen is ranked below Jamaal Charles, Demarcus Robinson, and Tyler Kroft (among dozens of others), in dynasty leagues. There might not be a point in trying to explain why I think Allen a great chance of reaching his elite QB1 potential—because people seem to either love him or hate him, with a heavy lean towards hate—but try to actually watch him play instead of reading off his stats and maybe you will become a believer if you aren’t already.

Sam Bradford is the quintessential example of ignorance driving the narrative behind professional athletes, but the former No. 1 pick is one of the top two or three natural throwers in the league with elite accuracy, anticipation, and arm strength to pick defenses apart at all levels of the field. If Bradford stays healthy (the only legitimate issue with him), Josh Rosen won’t see the field for a while. “Sammy Sleeves” is worth a last-round lottery ticket for those who need a backup fantasy quarterback.