WOLF SPORTS ALERT There may be temporary bugs due to site performance upgrades. Thank you for your patience!
Home / frontfantasy / Making The Case For The First Pick: Antonio Brown 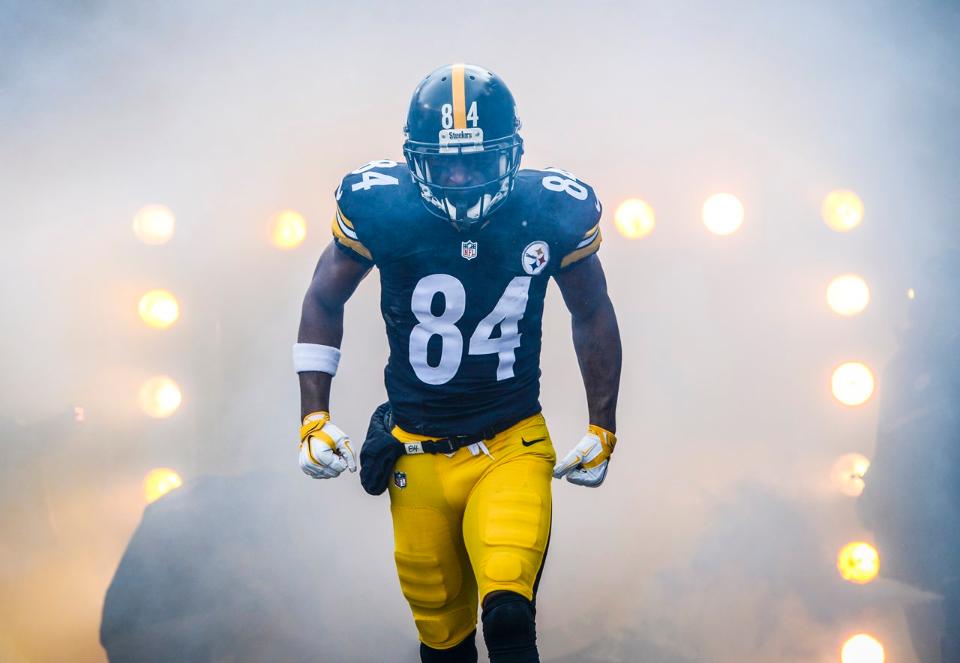 Making The Case For The First Pick: Antonio Brown


If you missed the case for Le’Veon Bell as the first pick in fantasy drafts this summer, you can read it here. Next up is the case for Bell’s teammate Antonio Brown. [Note: this conversation is for non-PPR leagues (i.e. standard), which is the type of scoring you should be using]

Fantasy football is all about numbers, and fantasy football owners don’t have to look any further than Antonio Brown. Last season, Brown finished as the overall WR3 in standard leagues, even with Ben Roethlisberger missing one game and being injured for others, Le’Veon Bell missing the first three games due to a suspension, and all three players sitting out Week 17 to stay healthy for the playoffs.

Not only that, but Martavis Bryant was suspended for the entire 2016 season and Ladarius Green played just six games for the Steelers. Excluding Bell at running back, there wasn’t another receiving threat that defenses really had to worry about besides Brown. AB still caught 106 passes for 1,284 yards, and 12 touchdowns, which was considered a “down year.” That is a testament to how good the soon-to-be 29-year-old is.

Brown has averaged 120.5 catches, 1,578.75 yards, and 10.75 touchdowns over the past four years. Here are how the numbers look by season, with the career high in each category in bold.

AB had the best two seasons of his career in 2014 and 2015, and there is probably a simple reason for that: Martavis Bryant.

Bryant’s rookie year in 2014 saw him catch 26 passes for 549 yards and 8 touchdowns. His 21.1 yards per catch made him one of the league’s premier deep threats, and he would have topped 1,000 receiving yards on just 48 catches at that rate. Bryant played in ten games and started just three of them, but the 2015 season saw those numbers increase to five starts in 11 games. The talented receiver caught 50 passes for 765 yards (15.3 AVG) and six touchdowns in the regular season, and had a 9/154 line in a playoff loss to Denver.

This is important because defensive coordinators couldn’t just double- or triple-team Brown with Bryant on the field, and it led to one of the greatest receiving seasons of all time for AB in 2015. Brown clearly has proved he doesn’t need any help to be great, so even if in a worst-case scenario (with Big Ben is healthy) where Bryant gets suspended again and Le’Veon Bell gets injured again, AB is still a no-doubt, top-three fantasy wide receiver. He is arguably the safest player in all of fantasy football.

If that worst-case scenario played out, we could probably expect another 100-catch, 1,200-yard, double-digit touchdown campaign for Brown; the guy simply gets his numbers no matter what the defense does.

If Martavis Bryant can stay out of trouble for 17 weeks, Le’Veon Bell stays healthy, and JuJu Smith-Schuster lives up to his second-round status? We could be looking at another year of 130+ catches, 1,800+ yards, and 10+ touchdowns for AB. In fact, converting the 21 games the two have played together into a 16-game average for Brown, it looks like this:

It’s hard to argue in favor of anyone else as the top pick in fantasy leagues thanks to Brown’s rare combination of upside and floor. With finishes of WR7, WR1, WR1, and WR3 since 2013, it would be a big surprise if AB wasn’t a top-three fantasy wide receiver for the fourth year in a row.