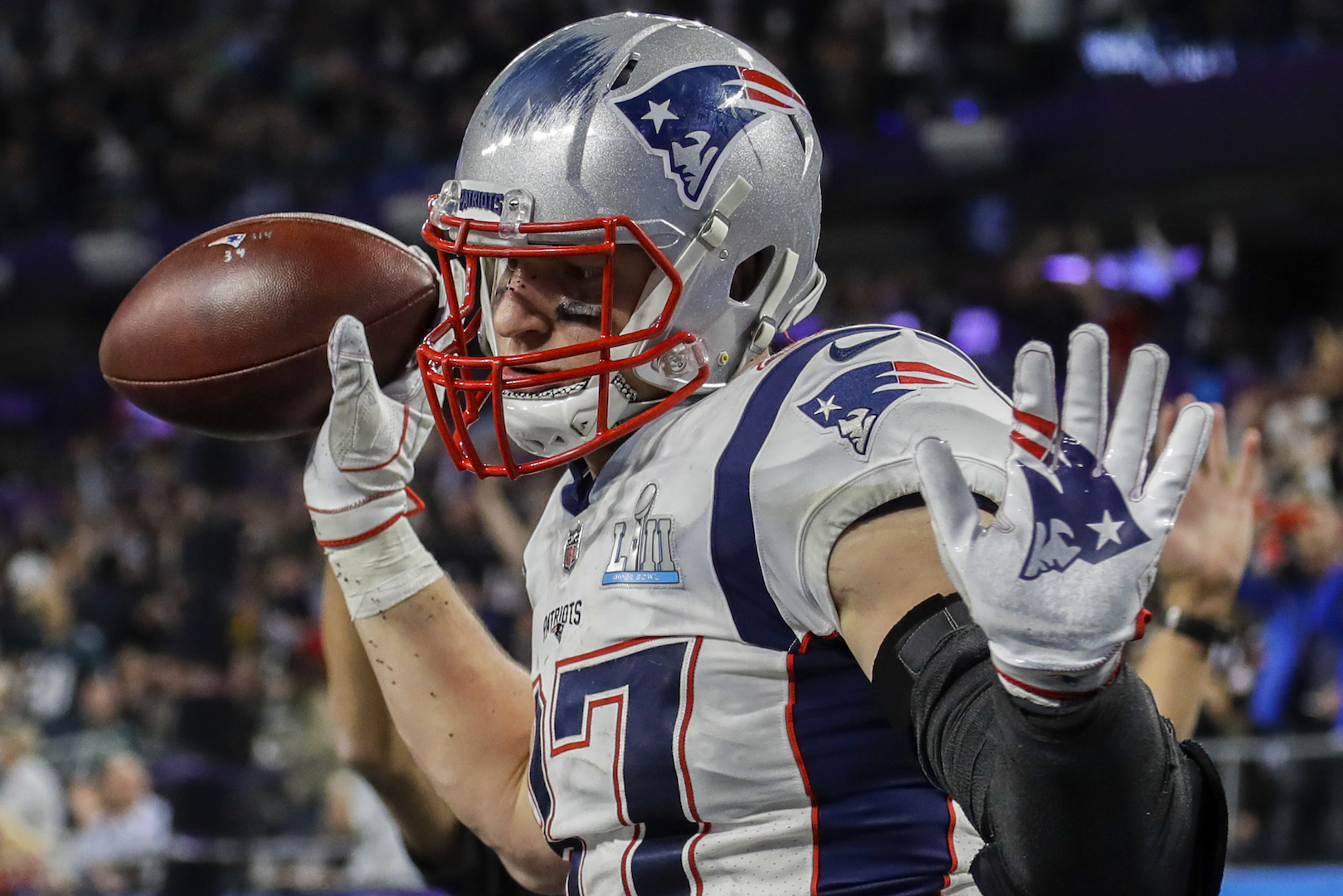 
Our countdown of the top ten players at each position in the NFL continues with tight ends. The position has become one of the league’s deepest in recent years, but this how we see the tight ends ranking heading into 2018.

He might not have the explosive athleticism that stands out, but Kyle Rudolph does everything you want from a tight end. The six-foot-six Pro Bowler blocks well, runs solid routes, makes a difference in the red zone, and has very soft hands. Rudolph is an easy target for quarterbacks at all areas of the field, and his presence should help new Vikings quarterback Kirk Cousins get acclimated to his new offense in Minnesota.

Delanie Walker has been one of the NFL’s most consistent players over the last four seasons, going for over 800 yards in each of those years as the main receiving target for the Titans. Marcus Mariota trusts Walker over the middle of the field, and the soon-to-be-34-year-old is a reliable target on short, intermediate, and deep routes. Walker is still one of the fastest tight ends in the league, and he’s one of the best run blockers at the position, too.

Skill-wise, O.J. Howard is already arguably behind only Rob Gronkowski. The 2017 first-round pick from Alabama is a physical freak at six-foot-six with 4.5 speed, and he has uncommon big-play ability at the position; as a rookie, Howard averaged 16.6 yards per reception and had six touchdowns on just 26 receptions while sharing snaps with Cameron Brate. Howard can take a routine pass in the flat and turn up the field for a huge gain as well as scream down the seam and run past defensive backs for a big play down the field. He might not put up the overall numbers like some of the other guys because of Brate’s presence, but Howard could become a great player in 2018.

Jimmy Graham doesn’t excel as a blocker, but he’s still one of the best tight-end receiving options in the league as he enters his ninth NFL season. Last season, Graham was a big part of one of the NFL’s most unstoppable plays: a throw to him at the goal line, whether it was a jump ball, a back-shoulder, a quick slant, or a quick comeback. The former Saint and Seahawk should remain among the best at the position in his first season with the Packers.

Unfortunately, Hunter Henry is out for the season with a torn ACL suffered during offseason training, but he would’ve been knocking at the door of elite status in 2018. Through two seasons, Henry had 81 receptions for 1,057 yards and 12 touchdowns while working in tandem with future Hall of Fame tight end Antonio Gates with the Chargers. We hope to see him back on the field better than ever in 2019.

The best ability is availability, so the case can be made that Jordan Reed should be out of the top ten tight ends entirely. However, when Reed is on the field, he’s typically one of the best players out there as an athletic, versatile weapon in the passing game. Reed is a unique player with basketball-like moves both as a route runner and as a ball-carrier, which leads to big plays for his team.

Zach Ertz could be as high as number two, as the top three guys behind the number one tight end are probably in a tier of their own heading into 2018. Ertz is coming off his third straight season with over 70 receptions and 800 receiving yards, and it was capped with a game-winning touchdown in Super Bowl LII. On third downs and other clutch situations, Ertz always seems to come up with the big play when the ball is thrown his way thanks to his ability to get open and high-point balls.

It doesn’t get much better than Greg Olsen for someone that stays on the field and consistently produces. Last season was the exception, as Olsen appeared in just seven games because of a broken foot, but he previously became the first tight end in NFL history to gain over 1,000 yards in three consecutive seasons and hadn’t missed a game since his rookie season in 2007. Olsen is great as a receiver, but he’s also very underrated as a run blocker for Cam Newton and the running backs in Carolina.

With over 800 receiving yards in each of his four healthy seasons and back-to-back years with over 1,000 receiving yards, Travis Kelce has a good chance to match Olsen as the only tight end in league history with over 1,000 yards in three consecutive seasons. The No. 87 in Kansas City has always looked similar to the No. 87 in New England, and he was Second Team All-Pro in 2017 after getting First Team All-Pro in 2016. Crafty as a route runner and potent with the ball in his hands, Kelce is a big-time weapon for the Chiefs.

There are many amazing tight ends in the league, but it doesn’t get any better than Rob Gronkowski, who might be the best at the position in NFL history. Gronkowski has been named First Team All-Pro four times (2011, 2014, 2015, and 2017), and he’s basically a lock for the honor if he stays healthy. Gronk is also a two-time Super Bowl champion (despite not being on the field for Super Bowl LI), and the connection with Tom Brady seems automatic when the game is on the line. Elite as a blocker, a huge explosive and reliable target, and a near-unstoppable force with the ball in his hands, Gronkowski remains the best tight end in the NFL.