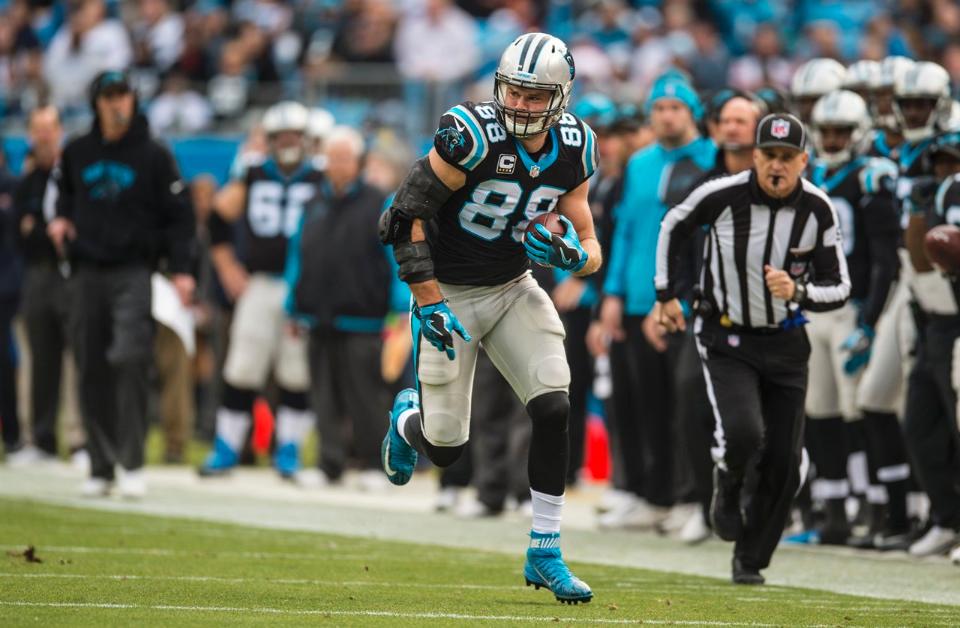 
The tight end position in the NFL has evolved and changed to the point where players at the position are putting up receiver-like numbers. Many of today’s tight ends are still also more-than-capable run blockers too, and there probably hasn’t been a better group of tight ends than now. We took each player's overall game into account and came up with these rankings. You can also read our quarterback, running back, and wide receiver rankings. [NOTE: these are NOT fantasy football rankings.]

Despite the rise in great tight ends in the NFL, there is little doubt Rob Gronkowski belongs number one on the list. As a tight end, Gronk is 26th all-time in yards per game, ahead of receivers like Steve Smith. Gronk doesn’t just rack up yardage, as he’s a touchdown machine, scoring double digit TD's in five seasons. The two seasons he hasn’t had double digit touchdowns, he only played in seven and eight games. The 6’6” specimen is a nightmare for opposing defenses, and Tom Brady could not have a better target running down the seams. Gronkowski is also a superb and willing blocker, and a great teammate.

He might not like being called it, but the guy they call “mini Gronk” or “baby Gronk” is living up to the nickname. Travis Kelce missed almost his entire rookie season with a knee injury after briefly appearing in just one game, but he’s been a big-time player since 2014. Last season, the Chiefs utilized Kelce more, and he put up 85 receptions for 1,125 yards, and five touchdowns, and he was named First Team All-Pro. Like Gronkowski, Kelce is not fun for defenders to try and bring down, and he uses his big 6’6” frame to be a great target for his quarterback. (He really does look like a Gronk clone, at times.)

The Panthers are clearly still thrilled with their trade for Greg Olsen in 2011, as Olsen has become one of the most consistent and reliable players in the NFL. Olsen has appeared in all 96 games since coming over to the Panthers, and he’s been a huge factor in the progression of quarterback Cam Newton. In 2016, Olsen became the first tight end in NFL history to have 1,000 receiving yards in three straight seasons. There’s no reason the 32-year-old can’t keep it going this season.

Unfortunately, Reed has struggled with injuries throughout his career, including concussions, but he’s among the most dynamic players in the NFL when on the field. Reed hasn’t hit 1,000 yards yet (mainly because of injuries), but his best season came in 2015 when he had 87 catches for 952 yards and 11 touchdowns. The former Florida Gator is almost like a basketball player in the open field, breaking opposing defenders’ ankles and picking up yardage for his team.

Delanie Walker has been quite the acquisition for the Titans. After playing as more of a complement to Vernon Davis in San Francisco and never surpassing 30 reception in a season, Walker has emerged as a major producer for Tennessee and a helping hand as young quarterback Marcus Mariota develops in the NFL. Walker has had 60+ receptions in all four seasons with the Titans, and he’s had 800+ yards in each of the last three seasons, including a monster 2015 when he had 94 receptions for 1,088 yards and six touchdowns. The Tennessee run game also probably would not be as good as it is without Walker’s blocking ability.

After putting up wide receiver-type numbers in a wide receiver-type role in New Orleans, Graham has still been a great player for the Seahawks. His two seasons in Seattle include a bad patellar tendon injury in November 2015, but Graham bounced back and is still among the best tight ends in the league, while improving his blocking for the Seahawks. While Graham might never put up an 85 catch, 1,200-yard, 10+ touchdown season with Seattle (he averaged an amazing 89 receptions, 1,099 yards, and 11.5 touchdowns in his final four season in New Orleans), he’s still an integral part of the offense and keeps gaining chemistry with Russell Wilson.

While the former Alabama tight end hasn’t played a snap in the NFL, he has all the ability to step in and be one of the better tight ends in the league as a rookie. Howard had only two and three touchdowns in his final two seasons in college, but Nick Saban did say they just didn’t use him enough, and that Howard would shine in the NFL. Howard is 6’6” and runs a 4.51 40, but he’s also a great run blocker. He’s a prototypical tight end that might be among the NFL's elite sooner than later.

People have been waiting for Zach Ertz to explode and turn into an elite tight end. While it hasn’t happened yet, Ertz has been a steady producer for the Eagles, grabbing 75+ passes for 800+ yards in each of the last two seasons. His yards per reception dropped last season, so the team can probably utilize him more as a down-the-field receiver like the previous offense. The former Stanford Cardinal continues to work at his run blocking and making progress there, too.

The 2011 second-rounder had a solid start to his career, including a nine-touchdown second season in which he made the Pro Bowl and was Pro Bowl MVP, but he hadn’t really progressed (he did battle some injuries) until last season. Rudolph found a great connection with Sam Bradford and had 83 receptions, 840 yards, and seven touchdowns. He’s also one of the best run blocking tight ends in the NFL (and he had to be, with Adrian Peterson running behind him for so many years).

Tyler Eifert took over for Rudolph at Notre Dame, and he comes right behind his former college teammate on the top tight end list. Eifert is a tantalizing weapon down the field for Andy Dalton, and he’s become one of the better touchdown scorers in the league. In 2015, Eifert led tight ends with touchdowns, scoring 13. Eifert has struggled with injuries throughout his four-year career, so hopefully he can remain healthy and stay on the field for Cincinnati.